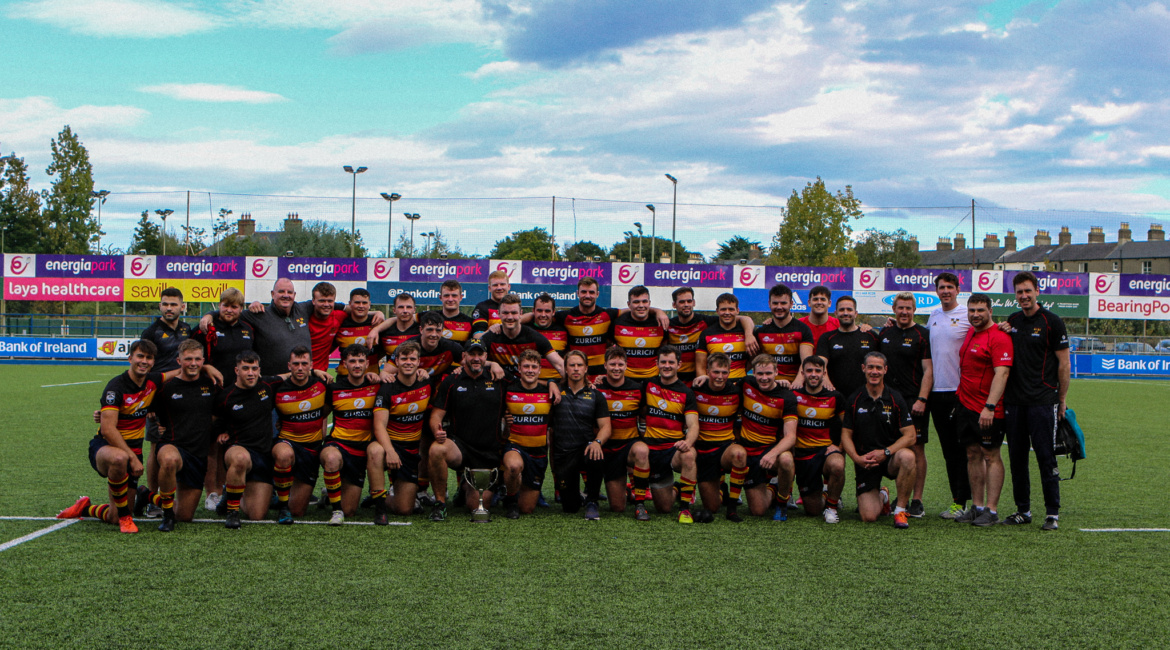 A great fixture for both teams as preparation for the All Ireland League which recommences after an 18 month hiatus.

Lansdowne started with a lot of energy and plenty of intent and following a crucial retrieval by hooker Luke Thompson from a James Kenny box kick, Lansdowne moved the ball wide for Corey Reid to consolidate their field position with a probing kick into the left corner which led to a Clontarf 5m lineout. Some great defensive pressure saw Clontarf forced to kick out of their 22 but could not find touch. Liam O’Sullivan kept the pressure on Clontarf and carried the ball back into the Clontarf 22. A couple of forward rumbles later saw Lansdowne spin the ball wide and some elusive running by Paul Kiernan saw him touch down just right of the posts. Outhalf Peter Hastie duly obliged with the conversion to put Lansdowne in a great opening position after only 4 minutes.

Clontarf responded well and both teams tested each other’s defence. with plenty of effort but both defences held out. Clontarf has some success moving the ball from a lineout just inside their own half but knocked the ball on in contact giving Lansdowne a scrum on the right hand side of the pitch on their own 10m line. Right winger Sean Galvin took the ball directly from the scrum and attacked the openside with intent and proceeded to run over 60 metres to touch down in the right hand corner. Again Hastie did the honours with a difficult conversion and Lansdowne led 14-0 after only 14 minutes.

Some sustained pressure from a clearly hurt Clontarf team saw them almost score in the right hand corner but for a try saving tackle from Liam O’Sullivan denied them. The ref brought play back to a penalty under the Lansdowne forwards and Clontarf pounded the line with their heavyweights up front and were eventually rewarded with a try from a couple of metres out. The successful left conversion left the score 14-7. Clontarf continued to dominate territory but a stubborn and aggressive Lansdowne defence held them out. A rare lineout in the Clontarf half saw a high tackle on James Kenny and a fine penalty kick from Peter Hastie again saw Lansdowne stretch their lead to 17-7 which brought both teams into half-time.

Five minutes into the 2nd half, Clontarf were awarded a scrum penalty and closed the margin to one score at 17-10. Minutes later a super backline move saw Eamonn Mills put through for what looked like a certain try but the pass unfortunately didn’t go to hand and the scoring opportunity was spurned. Lansdowne continued to generally control the game with most of the rugby being played in Clontarf’s half thank to their sharpness at the breakdown. Both teams exchanged penalties to make it 23-13. With 10 minutes left, a great break from Stephen Madigan saw Jack Dwan dive over for a try converted by replacement outhalf David Moran to give Lansdowne a strong lead at 27-13. Clontarf had lost a few players to injury at this stage and Lansdowne continued to control the game. Sub hooker Jamie Kavanagh seized on an overthrown lineout to run in another try which again David Moran converted to leave the final score 34-13.

So Lansdowne lift the Leinster Senior League Cup and as a result now qualify for the Bateman semi-final.  A great way for this young team to go into the All Ireland League but the players and coaches will know there are much greater challenges ahead.

Thanks to our hosts Old Wesley for the warm welcome and for streaming the game for those who couldn’t attend.

October 2nd sees Lansdowne host AIL heavyweights and reigning champions Cork Constitution in as difficult an AIL game as you could have. Home advantage will be crucial so please come out and support your club in what promises to be a super fixture.