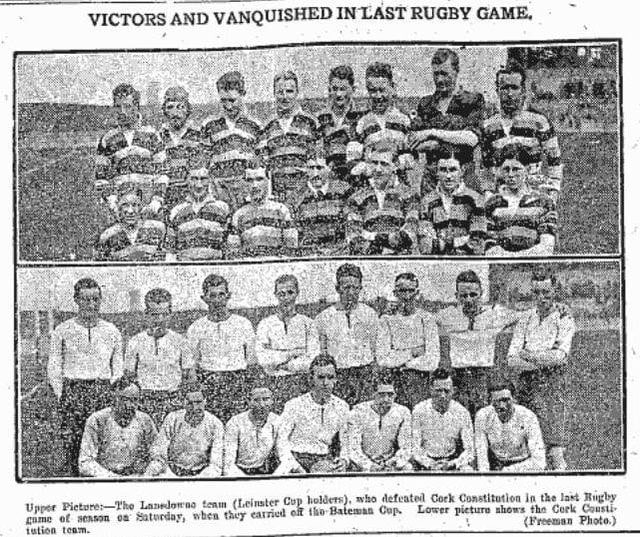 Cork Constitution have beaten all before them in the Bateman Cup since 2013, stringing together an enviable five All-Ireland Cup titles in a row, but this will be their toughest test yet as Lansdowne, who topped the Division 1A table by ten points this season, come calling with a hugely-motivated squad.

Cork Con actually lost the very first Bateman Cup final to Lansdowne back in April 1922, going down 6-5 at Lansdowne Road. The two tries-to-one goal win for the headquarters club was regarded as a fortunate one as Constitution, who had only won the Munster Senior Cup a week earlier against Garryowen at Markets Field, had what appeared to be a well-finished try from winger Jack Sweeney ruled out by a touch judge.

From newspaper reports of the day, Con had led 5-3 at half-time with ‘Reddy Barry putting Charlie Nolan over for Dan O’Connell to convert’, but Lansdowne triumphed thanks to a Bill Cunningham first half try off a scrum 15 yards out, which was added to in the second period when ‘the ball went out at halfway for a grand Lansdowne movement, and after Campbell, Cunningham, Nunns and Jock Bell had handled, Larkin ran over at the left for a try’. 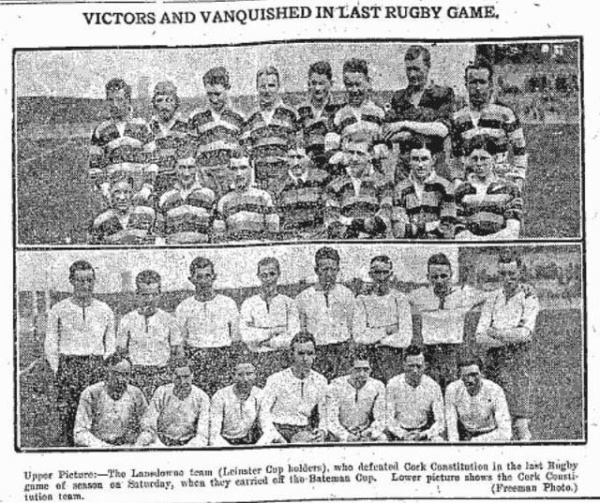 There was that late drama surrounding Sweeney’s chalked-off score, with the Freeman’s Journal reporter noting: “After Sweeney had got over for what everybody in the vicinity, including several Lansdowne players, thought was a score, he was whistled back for touch a yard out, and a very strenuous game eventually ended in a win for Lansdowne by a single point.

“For the winners Crawford did splendidly. He has a nasty job, but his kicking and tackling were very fine. Larkin was dangerous on the left wing, and Jock Bell did well at centre, while Nunns was capital in the second half. Campbell worked the scrum cleverly, and Cunningham played one of his best games. Dearden, Ludendorff, Purcell and Horace Bell were the best of the forwards.

“For Constitution, O’Connell at back was very sound, if his kicking was on the short side. Murphy and Dorgan were the pick of the ‘threes’. Barry and Nolan a capital pair of halves, and Popham, Hennessy, Young and Wilkie the best of the forwards.”

Lansdowne’s Belfast-born full-back and captain Ernie Crawford went on to win 30 caps for Ireland, captaining his country 15 times and also having a noted football career with Bohemians, very nearly playing for Ireland at the 1924 Olympics. He was a selector for Ireland’s 1948 Grand Slam-winning team and served as IRFU President in 1957/58. The teams that lined out for the inaugural Bateman Cup final were as follows:

The business end of the current club season is well and truly upon us and both Cork Con and Lansdowne are eyeing up a league and cup double. Brian Hickey’s Leesiders achieved that elusive feat last year, beating Old Belvedere (18-13) and Clontarf (25-21), showing their canny knack of winning high-pressure games on the biggest days in the domestic club calendar.

Inspired by first half tries from Liam O’Connell and man-of-the-match Brian Hayes, Constitution became the Bateman Cup’s most-decorated club last April, surpassing Lansdowne’s quartet of titles between 1922 and 1931. Out-half Tomas Quinlan’s 20-point kicking haul drove them to league glory against Clontarf a week later, and Hayes, together with second row partner Conor Kindregan, and Quinlan remain keg cogs in the Con wheel in 2018.

Hickey’s men will have been wounded by the manner of their thumping 43-12 defeat at Clontarf in the final round of the league, but hosting the Bateman Cup decider at Temple Hill is a welcome fillip. In Division 1A this term, they won eight of their nine home games, including a Quinlan-inspired 25-13 victory over Lansdowne in early March, with their only loss coming in October against Young Munster (20-19).
Vincent O’Brien and Luke Cahill, two prominent members of a well-drilled Con pack, both touched down in their 20-13 Bateman Cup semi-final victory at City of Armagh in January, a tight game in which the holders had to absorb plenty of pressure.

First-time Connacht Senior Cup champions Sligo also put it up to Lansdowne in the other semi-final, the Dubliners eventually emerging as 34-15 winners out west with Jack Dinneen, Harry Brennan, Adam Boland and Daniel McEvoy all touching down, in addition to a penalty try.

Mike Ruddock’s charges were the standard bearers across the league’s regular season, setting a clutch of team records. They posted the most wins (16), best scoring difference (+242) and most league points (71) since the current 10-team home-and-away format was initiated in 2011/12. They also set a new Lansdowne club record for most points (76) and tries (11) in a single match when hammering Dublin University by 50 points in late March. 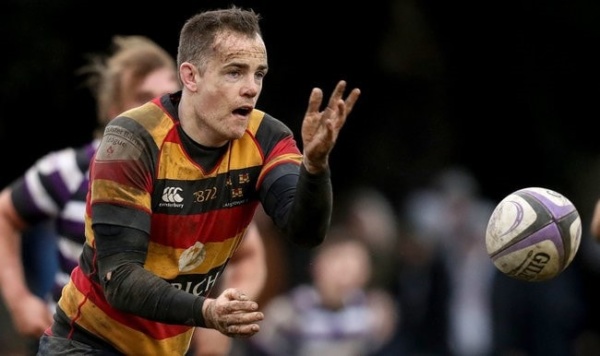 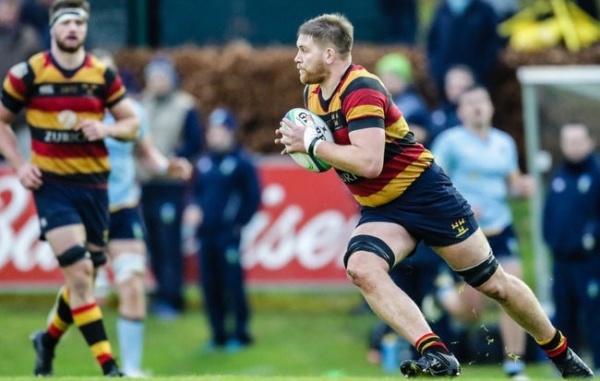 Their talismanic out-half Scott Deasy, a proud Corkman, continues to set the bar with a division-leading 196 points, while versatile youngster Mark O’Keeffe, who has played on the wing and at centre, has notched nine tries to put him among the most prolific try scorers in the top flight – only Clontarf’s Matt D’Arcy (10) and Garryowen’s Munster Academy winger Liam Coombes (11) have fared better.

Led by tighthead Ian Prendiville, Lansdowne have a similar all-enveloping style to Con in that their scrum and maul are big weapons, they each have classy game-breaking half-back pairings, and their back-lines – honed by young coaches Mark McHugh and Johnny Holland respectively – can do a lot of damage and possess plenty of finishing power.

Squad depth is never lacking in Ruddock-coached teams, and despite rotating their selection last week against Buccaneers, Lansdowne still had the luxury of bringing in players of the calibre of Leinster’s Tom Daly, on his return from a pre-season ACL injury, Ian Fitzpatrick and Peter Dooley. It all makes for a superb cup final occasion this weekend and what is likely to be a great advertisement for Ulster Bank League rugby.