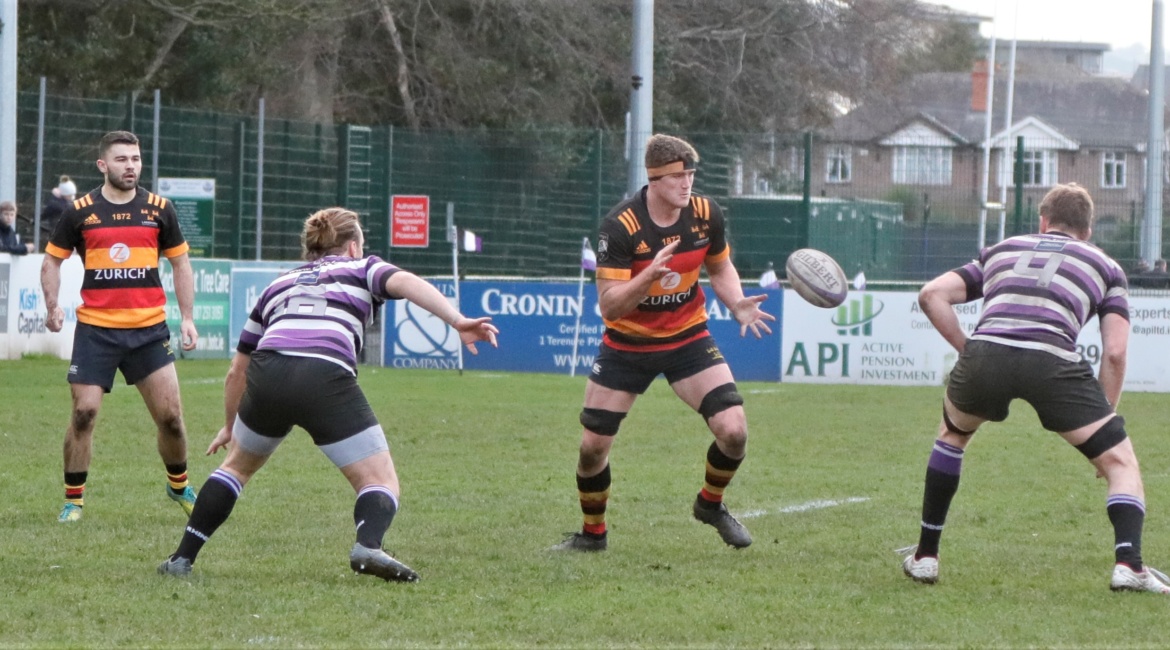 In the 5th minute of injury time, a battling Lansdowne side dug deep and snatched a vital victory against a competitive Terenure College RFC side in last Saturday’s Energia Division 1A clash.

The coincidences go further – this is Lansdowne’s third one-point League win in a row, all three having been achieved with hard-earned tries which snatched a late victory. The Headquarters side have now won five on the bounce, six if the Bateman Cup win against Armagh is included and appear to have put their early season troubles behind them.

This latest win was, in truth, a smash and grab effort by Mark McHugh’s charges. Outplayed for long periods of the game, they nonetheless defended with real grit and determination and hung in there until the winning opportunity presented itself.

Terenure took the game to the visitors from the outset and dominated early possession. Their only reward was restricted to two penalties, however, kicked by out half James Thornton after 12 and 26 minutes as defences were largely on top.

Lansdowne hauled themselves back into the match with a well-struck penalty from full back Tim Foley in the 33rd minute following an incident in which the home hooker, Robbie Smith was sin-binned.

Seeking to take advantage of their numerical superiority, Lansdowne mounted a series of attacks in what was, until the dying moments, their best phase of the match. Foley missed a more difficult penalty chance on 36 minutes, but shortly afterwards second rower Oisin Dowling, released from Leinster duties, surged through off the side of a maul and careered over the Terenure line close to the posts to put his side ahead for the first time in the 41st minute.

Foley neatly added the extras and Lansdowne had a slightly fortuitous half time lead at 10 points to 6.

This writer has often cited the Headquarters side for their ability to raise the tempo into the third quarter; this time it was Terenure who raised their game through good forward play, with prop Classen, second row Mick Melia and flanker Stephen Caffrey prominent.

Lansdowne were strangely error-prone when in possession in what were perfect playing conditions, and this halted their attacking initiatives on several occasions as mistakes were made and momentum faltered.

Terenure took full advantage and clawed their way back into the lead through a try by sub forward Paddy Thornton following a period of sustained pressure on the visitors’ defence.

Thornton’s convert put his team 13-10 ahead with half an hour to play. His side continued to boss proceedings, and territorial dominance was rewarded with a further Thornton penalty from a scrum as Lansdowne defended grimly. 16-10 with twenty minutes remaining.

The Lansdowne defence held firm, however, and a break by talented full back Adam Lagrue was halted with last ditch tackling and the pressure was eventually relieved.

Sterling in their defensive work were hooker Dan Sheehan – what a player – prop Marty Mulhall, Dowling and flanker Jack O’Sullivan, while Under 20 debutante flanker Mark Boyle also earned his corn.

Significantly, as the match went on the Lansdowne defence was able to absorb Terenure’s best attacking efforts and stay in touch on the scoreboard. The pressure was finally lifted following a Terenure handling error. This was then followed by a penalty which Foley duly dispatched into the Terenure ’22 close on time.

Suddenly Lansdowne scented an opportunity, and the resultant penalty line-out was mauled close to the home try line. A penalty for a high tackle in front of the D6’ers posts was spurned in favour of a scrum; hard yards were fought out as the Lansdowne pack battered the Terenure defence.

Finally, brave Sheehan plunged for the line and squirmed over to the left of the posts for the crucial try to bring his side within a point of the home team in that critical 5th minute of injury time.

Foley still had to do the needful, but he was sure-footed in slotting the conversion to see his side home in somewhat improbable circumstances.

James Kenny played well at scrum half, often on the end of a slightly dodgy service from his pressurised pack. All of the backs acquitted themselves well in defence and, ultimately, Lansdowne outscored their hosts by two tries to one and, on that basis, deserved their hard- fought victory.

There is considerable intestinal fortitude in this young Lansdowne side, who will play Clontarf in two weeks’ time on St. Valentine’s night (Friday the 14th of February) under lights in the Aviva Stadium.

This will represent a serious test of Lansdowne’s play-off credentials, with both sides level on 30 points and a place in the top four awaiting the winners. Make sure you book your place and support your Club on the night!