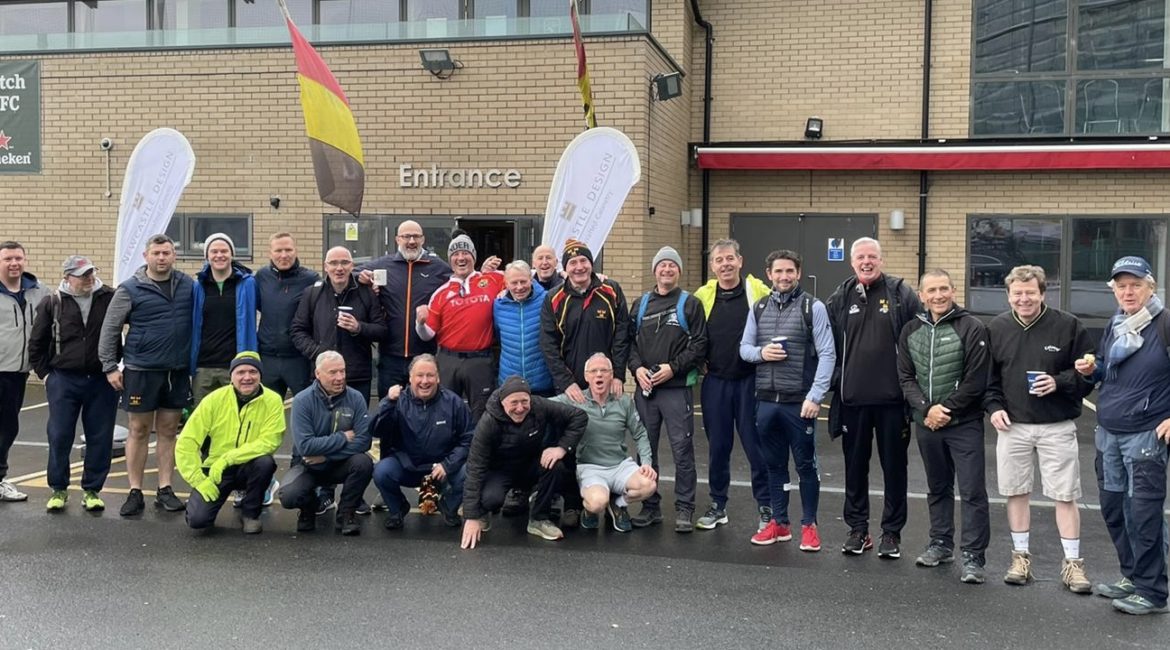 I think it was Van Morrison’s Momma who told us there were Days Like These.

Last Saturday was a day that will live long in the memory of the 30 or so brave souls who struck out at first light from Everest Base Camp ( a.k.a. the Lansdowne Car Park) to ascend the heights of Three Rock in memory of our old pal Ingo and all of our members and friends who have suffered with the terrible affliction of Motor Neurone Disease.

It was a day to treasure as old friendships were rekindled, old stories retold, old games reimagined and old battle scars compared as we trudged the 26 kilometres there and back all the while revelling in the brotherhood and warmth of the Lansdowne family.

Five hours of walking and talking without the usual distractions of TV, phones (or drink!) was a welcome antidote from the usual pressure of every day life and is to be recommended!

The day started out with a gathering of willing bodies blinking in the early morning light and sipping on a cup of Kermie’s finest instant coffee in a selection of mugs collected from his kitchen!

In a cruel twist of fate both Kermie and Aidan Delany were struck down with Covid in the week before the big day and had to readjust their plans.

Aidan did what all good men would do in the circumstances and signed up his better half Petrina and two sons to take his place ( three for the price of one!) while Kermie took on duties of a Sherpa and drove the support vehicle while arranging supplies among the way !

There was wild talk of bacon butties being supplied at he base of the mountain but sadly this proved to be beyond the organisational capacity of the support crew ( Kermie) and we were treated to more instant coffee and Mars Bars instead !

There was much talk of taking one for the team, belt tightening and back slapping as we slogged up the last few kilometres to the summit where the highlight of the day was the arrival of the one and only Paddy Halpenny whose mental fortitude and determination were a tonic for the troops. Hats off to Halpo who dug deep and showed us all what can be done if the body is creaking but the mind is willing!

Spirits were high as we made the turn and headed for home secure in the knowledge that it was downhill all the way.

Kermie made up for his early setback by emerging through the mist with a supply of sandwiches and Energy Drinks as we made the turn for home.

There was a vicious rumour doing the rounds that Big Moley and himself were spotted skipping arm and arm into the nearest Spar for badly needed provisions! To paraphrase the great  AC / DC  …. ‘Its a long way to the shop if you want a sausage roll’.

JF ‘soft hands’ Burke proceeded to show off his long forgotten waitering skills by dropping a full tray of sandwiches on to the road outside the Spar much to the joy of the local seagulls! Hard to believe but he actually turned a redder shade of Red than the Munster jersey he was wearing!

As we approached the home stretch, we were joined by the ranks of the Climb for Ingo Lite Brigade led by the indomitable John Kearney who took on the task of walking from Lansdowne to the Dropping Well and back and who made up for their shorter walk by infusing us with a new level of enthusiam as the thought of lunch and pints drew nearer!

The day was enriched by the presence of Ingo’s kids John and Rachel who carried his spirit with grace and who hopefully got a taste of how much he was loved by us all.

Special mention goes out to Mark and Caroline McMahon who led from the front striking out at the ungodly hour of 6.30 am and clearing the path for all that followed!

Big shout out to Mark Forrest who came up with the idea of celebrating Ingo while connecting into the Climb for Charlie campaign to raise funds for MND and our GoFundMe page is set to hit the €20k mark, a fitting testament to the extraordinary generosity and support of the Lansdowne family and friends.

Also a special mention for Katie Boylan and John Dawson for coordinating and sponsoring the promotional gear including the now much sought after ‘Climb For Ingo’ baseball caps and also thanks President Colin Goode for his support of the entire endeavour and for agreeing to contribute the proceeds from the match forecast to the cause and to Elayne for pulling it all together on the day.

Solace for aching limbs was the order of the day as we matched our 5 hours of walking with 5 hours of ‘analysis’ in the clubhouse afterwards and the only wrinkle on what Lou Reed would describe as the ‘Perfect Day’ was the loss to Terenure in the big AIL Game.

Nobody’s perfect and I think even Van Morrisons’s Momma would grant us that.