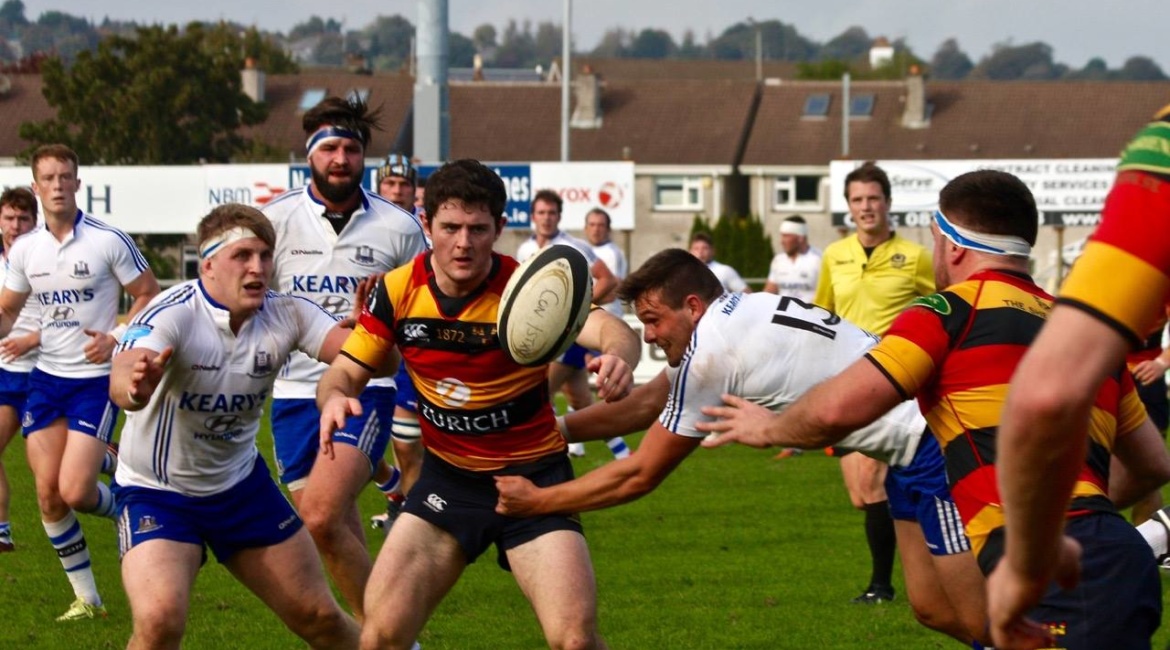 Scott Deasy, Lansdowne’s man-of-the-match and a former Constitution favourite, closed out the first half of this keenly-contested final with a penalty which gave the Dubliners an 8-5 lead at the break, the sides trading well-taken tries from Liam O’Connell (19 minutes) and Alan Bennie (28).

The headquarters club tellingly strung together three unanswered tries up to the hour mark, second row Josh O’Rourke muscling over, Adam Leavy scoring from a favourable bounce and then centre Mark O’Keeffe ran in an intercept score that had Con 20 points behind.

Brian Hickey’s charges rallied with a 70th-minute converted try from Munster lock Darren O’Shea who was sprung from the bench, but fleet-footed winger Leavy turned provider to send Corkman Eamonn Mills over for Lansdowne’s fifth try and the icing on the cake.

Ireland Sevens international Alex McHenry was first to threaten for the hosts, breaking past two defenders on the left wing before his kick ahead had too much on it. Con’s ace place-kicker Tomas Quinlan narrowly missed a long range fifth-minute penalty attempt, and the early pace of the game was ramping up with both back-lines looking to move the ball wide.

Lansdowne’s indiscipline saw them lose hard-won field position on a couple of occasions, and a brilliant break involving Deasy, Harry Brennan and full-back Mills was thwarted by a Quinlan tackle and Shane Daly’s well-timed interception.

It was Cork Con who took the lead with a scintillating try at the end of the opening quarter. Luke Cahill’s lineout steal launched them forward, captain Niall Kenneally’s inviting pass putting McHenry racing up into the 22, and after Cahill’s soft hands released Brian Hayes on a diagonal burst, the lock’s superb pass out the back door put winger O’Connell over in the corner with a clinical finish past two defenders.

Quinlan was unable to convert, and Lansdowne found a response by the half hour mark. Foster Horan and Brennan both found gaps in the home defence, before scrum half Bennie – spotting a missing Con pillar at a ruck – sniped into the 22, side-footed through and beat Daly to the touchdown.

The usually-reliable Deasy missed the right-sided conversion and soon sent a subsequent drop goal attempt wide, while centre Brennan knocked on with men outside him and the Con defence looking stretched. However, Deasy nailed a 38th-minute penalty goal and Lansdowne maintained that lead despite a late surge from the Leesiders, which included a promising O’Connell run.

The second period was scrappy and evenly-balanced until Lansdowne struck for their second try, nine minutes in. Deasy kicked into space with a clever punt, the pacy Mills getting up to gather it, and Bennie and Horan straightened up the attack before lock O’Rourke used brute strength to burrow over for a five-pointer.

Fortune favoured the visitors four minutes later when Con winger Rob Jermyn was caught out by a horrible bounce from a Mills kick, and Leavy – younger brother of Leinster and Ireland star Dan Leavy – swooped in to score to the left of the posts.

Deasy continued to misfire off the tee, but Con’s attack was getting little change from Lansdowne’s resilient defence. A Cahill knock-on spoiled a McHenry-led break up the left touchline, before Quinlan’s pass – in the midst of a momentum-building set of phases – was gobbled up by O’Keeffe who sprinted out of the Lansdowne 22 and all the way to the Con posts.

The extras were comfortably added this time by Deasy, giving his team a 20-point buffer with as many minutes remaining. Lansdowne struck another psychological blow when turning Con over at a maul and then forcing a scrum penalty in their own 22.

To their credit, the five-time champions kept plugging away and gradually wore down the Lansdowne defence for a hard-earned second try. O’Shea and McHenry did well to get the ball to replacement JJ O’Neill whose pass back inside put the onrushing O’Shea over in the left corner.

Quinlan knocked over a tremendous conversion to reduce the arrears to 25-12, only for Lansdowne to swiftly shut the door on any potential comeback. Leavy showed some lovely footwork and impressive pace, on a 74th-minute cross-field run, to avoid four defenders before passing for his back-three colleague Mills to dot down, and Deasy’s conversion sealed a 20-point winning margin.

Lansdowne are the first club from outside of Munster to win the Bateman Cup since the competition was reintroduced by the IRFU in 2011. This trophy success on the road gives the Division 1A table toppers a significant boost heading into next Saturday’s league semi-final against Garryowen on the Aviva Stadium’s main pitch. Meanwhile, Con will have to quickly put this disappointment behind them as they will not want to relinquish their league crown in a week’s time at Terenure College, their semi-final hosts.

Corkman Scott Deasy claimed the Man of the Match award in @LansdowneFC 's 32-12 #BatemanCup victory over @CorkConRugby in Temple Hill on Saturday.