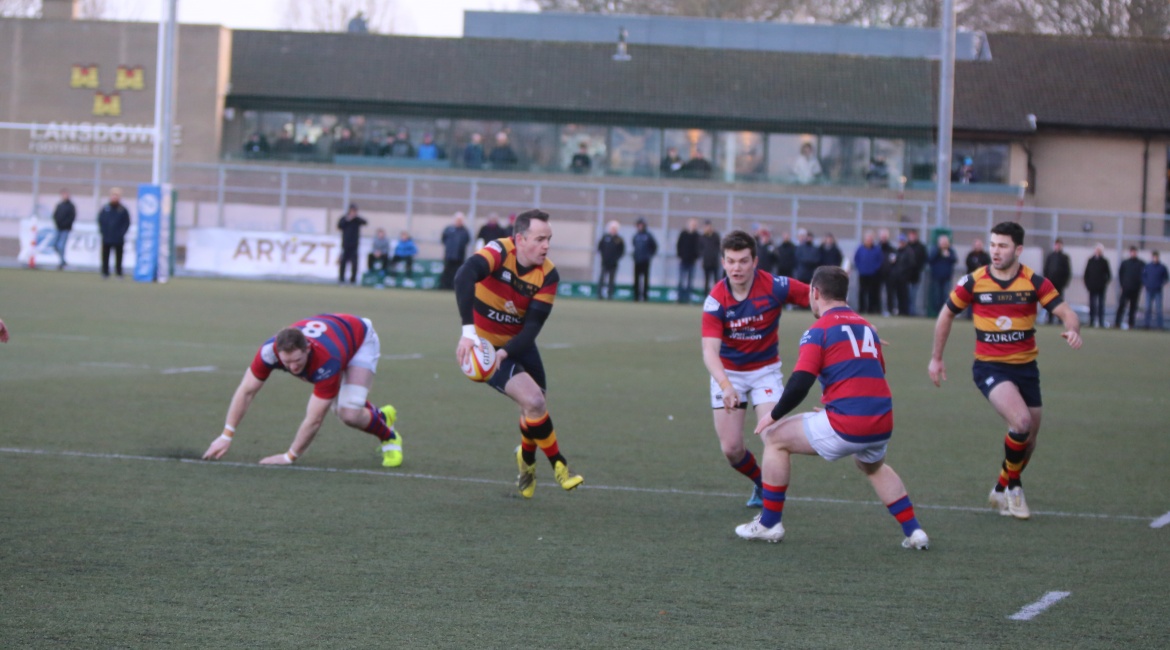 “It’s AIL rugby, but not as we know it!” was the parting comment of one of the visitors from Sligo RFC who visited Lansdowne Road last Saturday to cast an eye over their Bateman Cup opponents next weekend.

Our Sligo visitors could be forgiven their trepidation, as the Division 1A leaders stretched their advantage to 13 points with as good a performance as the side has given all season.

Visitors Clontarf never gave up, but in truth they were out-gunned and out-classed by a polished Lansdowne performance that was as resolute in defence, when required, as it was deadly in attack.

Lansdowne were once again superbly marshalled by out half general Scott Deasy, who scored 18 points in a classy display. Scott kicked 6 from 6 in cold and blustery conditions and added in an intercept try for good measure as he broke the 700-point barrier for the Club and extended his lead as Lansdowne’s top points scorer in the competition.

Clontarf had opened well, but inexperienced out half Conor Kelly missed a relatively straight-forward penalty opportunity in the third minute which would have put his side ahead.

Lansdowne responded immediately from the ’22 restart, and good rucking possession saw them set up a strong attacking platform. The ball was spun to Deasy, who got outside his man and set up left winger Adam Leavy, who made no mistake with a strong thrust to the line. Deasy kicked an excellent conversion across the wind and the home side were 7-0 ahead after only five minutes.

The Lansdowne scrum won some early penalties, but were penalised on several other occasions when going forward, to the bemusement of the home spectators. The line outs functioned very well in the difficult throwing conditions, and well done to hooker Tyrone, in particular, Moran in this regard.

Clontarf launched several attacks of their own, but were penalised on several occasions as the Lansdowne forwards managed to isolate the ball carrier, or else were turned over by resolute Lansdowne play, one turn-over by flanker Jack O’Sullivan, in particular, nipping a dangerous threat from the visitors in the bud.

Lansdowne always looked threatening in the backs, with centre Harry’s Brennan’s pace and guile complimenting Fergal Cleary’s more robust approach in ball carries. Either way, the outside backs saw plenty of ball, either by hand or by foot.

It was this latter mode that saw Lansdowne’s second score of the afternoon, a superbly flighted cross-kick for Deasy finding right winger Daniel McEvoy in full flight. The winger still had plenty to do, but he handed off his opposite number before burning the cover to cross out wide for a top-class finish in the 21st minute. Once again Scott Deasy judged the wind superbly when landing the difficult conversion. 14-0.

Lansdowne almost extended their lead a few moments later when a great counter-attack led by Harry Brennan set McEvoy clear only for the winger to be called back for a forward pass, which appeared to be a hard call against the enterprising home backs.

Lansdowne’s excellence in both defence, when required, and in attack continued, although a penalty was conceded in the 29th minute which saw Kelly open the visitor’s account as he reduced the home lead to 14-3.

Once again, Lansdowne bounced back, and the second of two delightful breaks in a row by live-wire scrum half Alan Bennie saw him scamper over under the posts from 30 metres out – his fourth try in two League matches – without a hand being laid on him. Scott Deasy nailed the (for once) easy convert, and the Headquarters side were 21-3 ahead after 32 minutes’ play.

Care to Comfort Man of the Match Alan Bennie was performing like a human dynamo, and a marvellous cameo moments later saw him make another break out of defence, only to throw a loose pass to a Clontarf player. Undaunted, he spun and tackled the opponent and stole the ball back from him!

Lansdowne faced the second half with the wind to their backs and seeking a further try to gain a bonus point. A nice early move saw Eamonn Mills on the counter attack linking up with the highly impressive Leavy and Brennan and a platform set up in the Clontarf ’22.

The visitors conceded a penalty following good approach work by Deasy and Brennan and the out half was again rock steady in kicking the goal for a 24-3 lead after 45 minutes. Lansdowne again surged into the attack, with the back row of Aaron Conneely, who had a supreme match, Willie Earle, who was everywhere, and Jack O’Sullivan dominating their opponents.

Captain Ian Prendiville also enjoyed a rich second period, with some good carrying, and was well supported by his front row companions, Greg McGrath and Ty Moran. The hard yards were being made by Oisin Dowling and Josh O’Rourke in the boiler house, while subs Adam Boland and Jack Dwan ensured that the momentum was maintained when they made their entrances.

Charlie Rock came on for Alan Bennie at 9 on 50 minutes, and build well on the platform laid out by the industrious Bennie. It was Rock who built on the hard yards made by Josh O’Rourke, in particular, when he sent the driving Conneely through the gap for a well-worked try and the bonus point. Deasy once again obliged and the home side were 31-3 ahead.

Clontarf didn’t give up, and were rewarded with a try by centre Conor O’Brien to cut the deficit to 31-8. The visitors were enjoying their best period of the afternoon, but resolute Lansdowne defence, led by Conneely, in particular, saw them denied.

Clontarf’s frustrating afternoon was then compounded by the ever-alert Deasy, who picked off a pass on the ten-metre line to saunter over for the home side’s fifth try under the posts, which he converted to complete his 18-points personal haul and a 31 points to 8 score line.

Lansdowne thus extended their highly-impressive unbeaten AIL win tally to 11. Next week sees the Club venture into unknown territory to take on Division 2C leaders Sligo RFC in the Bateman Cup, a trophy last won by Lansdowne in 1931.

Sligo won the Connacht Senior Cup for the first time since 1914 by defeating Corinthians before Christmas. They share the same playing colours as Lansdowne and will be determined not to let the side down when they take on their Dublin 4 visitors.

A large travelling party will support the Division 1A leaders, and many are overnighting in the Sligo Park Hotel. You are cordially invited….