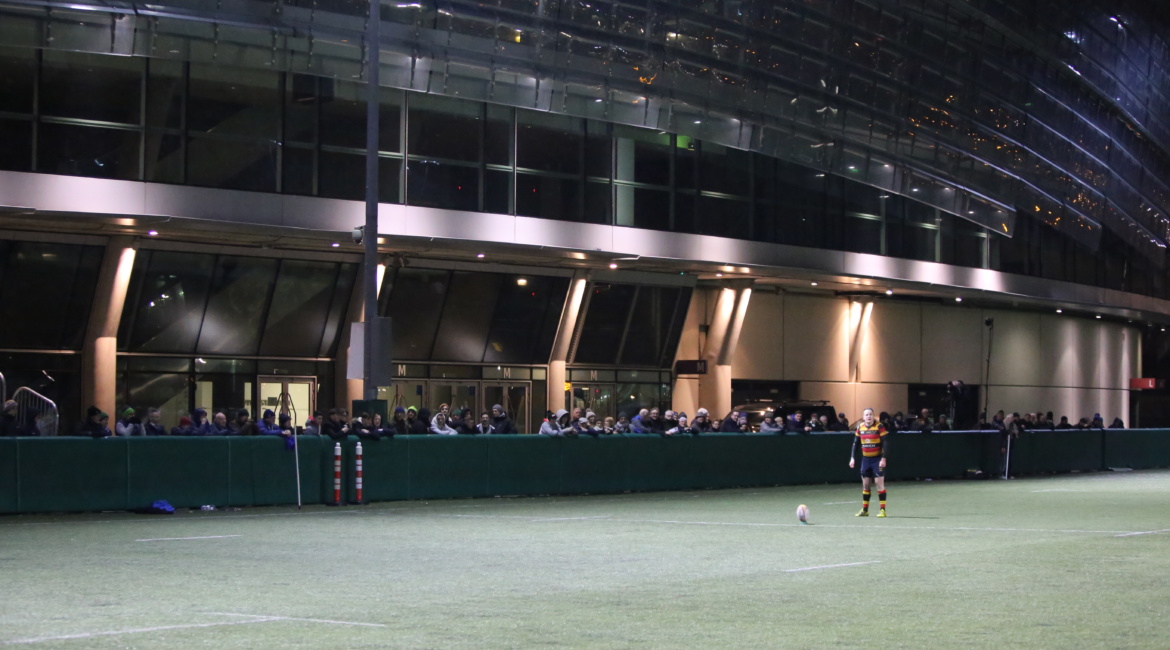 Lansdowne unveiled their new, “pop-up” stand on the Aviva back pitch in Lansdowne Road last Friday night, the novelty of which even earned a mention in the Irish Times on Monday morning!

The new facility was scarcely used, however, as the rain that cascaded down around the international stadium for most of this tough, rugged Ulster Bank Division 1A encounter had most spectators clinging to the shelter of the stadium curtilage.

St. Mary’s lost their influential full back, David Fanagan, in a freak training ground accident on Thursday night, and he was replaced by Matthew Timmins, while flanker Charlie Butterworth was a late withdrawal for Lansdowne, being replaced by former Under 20’s captain Jack O’Sullivan.

The conditions were such with a greasy ball that the team which adapted better to the conditions were likely to benefit most; game management and tactical control would be of the essence. Lansdowne were guilty of a lack of control initially, typified by a missed penalty to touch from the 10-metre line which resulted in them ending up in their own ’22, rather than the oppositions.

The home side didn’t clear their lines and duly paid the price, St. Mary’s out half Sean Kearns kicking a penalty in the 7th minute to open the scoring.

Lansdowne went on the attack immediately from the restart, and a strong thrust down the right- hand side saw good interplay between scrum half Alan Bennie, full back Eamonn Mills, centre Mark O’Keeffe and second row Josh O’Rourke.

The move stalled temporarily, until further good work down the right again saw winger Daniel McEvoy set clear and he rounded off a neat move with a well-taken try. Out half Scott Deasy, who kicked four from four on a difficult night, split the posts with the conversion and the home side had their noses in front, 7-3 after 9 minutes.

The game see-sawed between the two 22’s as both sides sought to get the nudge on up-front. Mary’s were highly-motivated and well organised, and there was little between the two sets of forwards in the tight. If Lansdowne had the edge in the scrum, where they won some four penalties, the good burghers of Templeville had the edge in the line-outs, while the rucks and mauls were evenly contested throughout.

Kearns kicked a well-judged penalty from 32 yards to narrow the gap to a single point in the 17th minute. Lansdowne were then guilt of some sloppy work which saw Kearns carry the ball out of the visitors ’22 and play brought to the Lansdowne ’22.

The Headquarters side returned to the attack, with Deasy and centre Harry Brennan probing, but the Mary’s defence was dogged and it was challenging to exert consistent pressure in the difficult handling conditions. Former Lansdowne man and scrum half Padjo O’Driscoll had a good return to Headquarters for his side and played well.

Daniel McEvoy was unlucky not to score a second try during another foray down the right, but the chance was lost.

Just on half time, St. Mary’s punished the home side for failing to clear their lines following several minutes of home team possession, during which they failed to make any real headway; they were penalised and, once again, Kearns made no mistake from the tee as he sent his side into the break with a deserved 9-7 lead.

During that first half, Lansdowne conceded a lot of ball and territory to a determined St. Mary’s side that is fighting for its Division 1A survival. After an initial flurry from the visitors, the second half saw a much-improved performance from the home side, with hooker Tyrone Moran, in particular, Care to Comfort Man of the Match loose head prop Martin Mulhall, second row Josh O’Rourke and the always industrious Willie Earle prominent.

The scrum began to yield penalty awards, and the arrival of fresh legs in the form of prop Ntinga Mpiko and back rower Barry Fitzpatrick paid dividends. Tyrone Moran made a characteristic charge up the middle to set up a good field position. On the hour, Scott Deasy struck a neat penalty goal to edge his side ahead – a lead they were not to lose.

Harry Brennan was trying hard to make the breakthrough in the middle, but the conditions and determined defence reduced opportunities to a minimum. A key penalty turn-over was won in defence in the 69th minute and Lansdowne cleared their lines. A penalty count of 7-2 during the second period underscored the growing superiority of the home side, but every inch had to be scrapped for.

Lansdowne won a penalty 25 metres out in the 78th minute; Deasy made no mistake from 10 metres in from the touchline. Lansdowne went back on the attack immediately from the restart against their committed visitors, who only now began to flag. A further penalty on full time eased Lansdowne out to 16-9 on a night when tries were at a premium.

A tough, uncompromising match, especially up front, in which every metre was contested. Even if they were held scoreless in second half, St. Mary’s, for whom captain Ciaran Ruddock, hooker Richard Halpin and flanker Ronan Watters played themselves to a standstill, needn’t fear for the club’s survival if they contest their remaining matches as ferociously as they did this one on Friday night on the Aviva back pitch.

Lansdowne thus extended their winning tally to 12 matches. Thirteen points to the good with five matches to play sounds impressive, but with trips to Cork and Young Munster still to come, nothing can be taken for granted if the target of a home semi-final is to be realised.

Many thanks to Match Sponsor Tony Garry, Man of the Match and Match Ball sponsors Care to Comfort and Leddin Finance for their backing and also to everyone who supported the well-attended pre-match function.