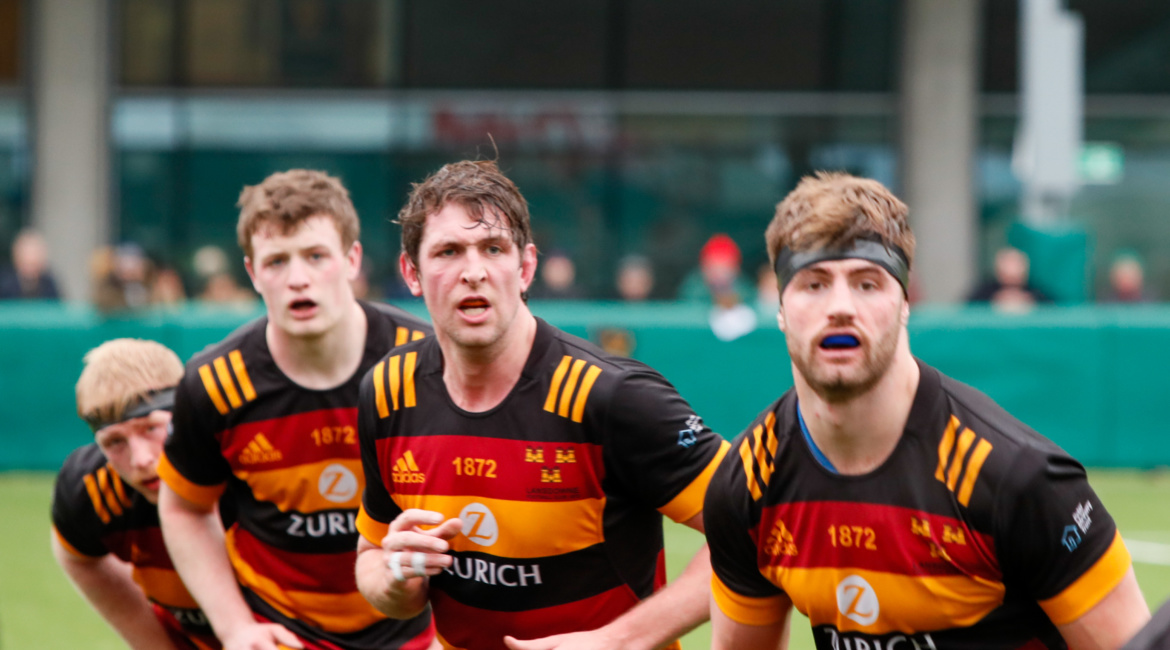 Lansdowne went down to their fourth defeat of the Energia Division 1A at home against a dogged Young Munster side whose edge up front marked the difference between two-evenly matched sides on the Aviva Stadium back pitch last Saturday.

This was a battle of the basement following both sides’ struggles in the early days of their League campaigns and, indeed, Young Munster’s narrow victory marked their first win in the Division. Lansdowne’s loss sees them slip to last position in the table as the Cookies success saw then jump over the host side.

Defences were largely on top in a dour, rugged contest which never hit any great heights. This was despite dry conditions that were well suited to attacking rugby.

Lansdowne fielded a strong backline, with Leinster out half Harry Byrne and winger Cian Kelleher released to the club. Young Under 20 open-side flanker Mark Hernan, captain of last season’s St. Michael’s SCT side, thus had a tough debut, but acquitted himself well.

The early loss of hooker James Rael in the 20th minute proved particularly costly, as it was up front that the Headquarters side struggled for parity. In the vital last quarter of the match when Lansdowne upped the tempo and attempted to chase the game, their set piece let them down as they chased hard to level the game.

Lansdowne were largely living off scraps for most of the proceedings, and their attempts to create attacking situations off marginal ball put their passing game under pressure. The club’s success in recent years has been built on the premise of front-foot ball from the pack fueling a speedy backline; here, attempts to run marginal ball against an ever-willing Young Munster defence paid little dividend.

The only attempt at goal during a hotly-contested first half fell to Byrne, who was narrowly wide with a penalty after 29 minutes. During this period, the Cookies dominated possession and territory and they were only denied a try on more than one occasion by fierce Lansdowne defence, while the home side’s opportunities were limited to occasional breakouts in which scrum half Tim Murphy, centre Harry Brennan and full back Eamonn Mills were prominent.

These attacking phases were too isolated, however, and what little momentum was built up was quickly dissipated through errors and mistakes.

Nil-all at the break told its own story. The crucial moment of the match saw Young Munster score a hotly- disputed try on the hour. Cookie right winger Luke Fitzgerald kicked ahead and was adjudged to have won the race for the touchdown, although several spectators in the area claimed vociferously that the winger never grounded the ball.

The touch judge thought differently, however, and the referee awarded the try. Out half Even Cusack landed a superb conversion from the touch-line in what was the best piece of skill displayed in an otherwise disappointing encounter.

Following the Young Munster score, Lansdowne tried to rally and enjoyed their best phase of the match. However, their momentum was stifled by turn-overs, particularly in the line-out. Meanwhile, the visitors stuck to their defensive task gamely, and by the end the home side had largely run out of ideas.

A two week break before an always challenging Friday night trip across the Liffey to play Clontarf under lights awaits next; two weeks that will provide a vital opportunity for coaches Mike Ruddock and Mark McHugh to refresh and revitalise their troops for the hard road ahead.