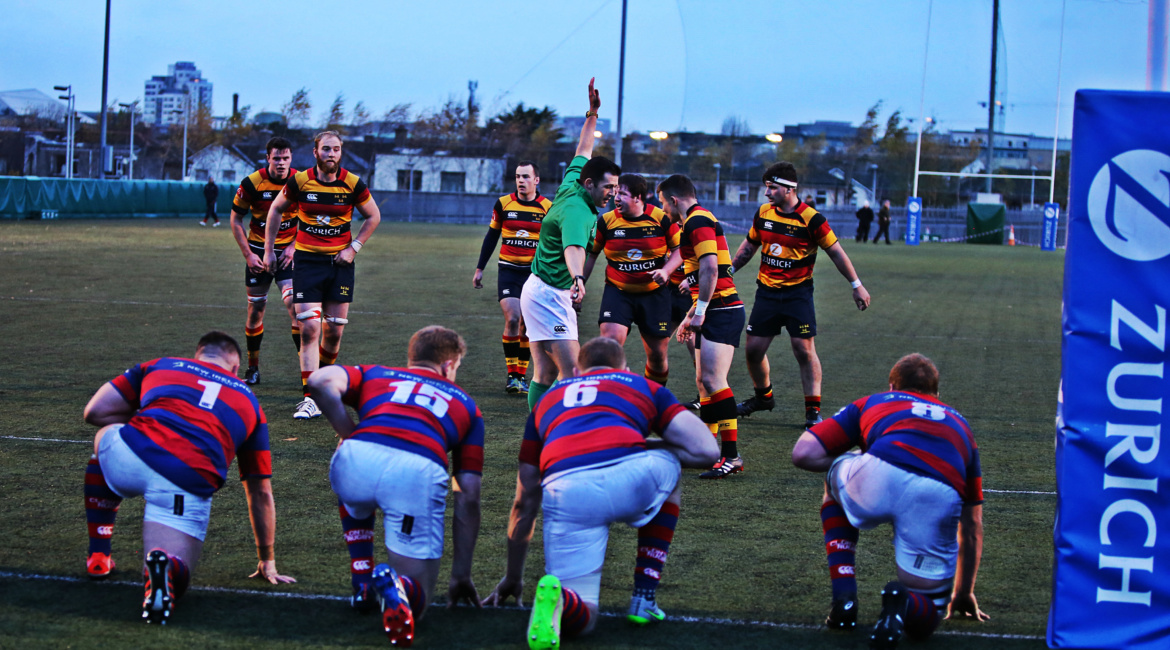 A highly entertaining and always compelling clash between last season’s two League finalists produced a sensational climax last Saturday, as Lansdowne came back from the dead to snatch what had appeared an unlikely 23-all draw.

In truth, Clontarf have only themselves to blame for letting a never-say-die Lansdowne effort grab a share of the spoils. The concession through ill-discipline of two yellow and one red cards by the visitors opened the door for a battling Lansdowne performance that had every watching eye glued to the pitch during the 9 minutes 37 seconds of injury played in the second half by referee Kieran Barry.

Having said that, Lansdowne can take full credit for having put the visitors under such pressure during that long half that their discipline snapped. They failed to contain a Lansdowne eight that grew in stature and confidence as the half progressed. It may seem invidious to single out individuals in what was essentially a great team performance, but two-try hero Joe O’Brien put in a huge amount of work around the park all afternoon. He was ably assisted by tight head Ian Prendiville and his young open side, Max Deegan, as well as by young second row replacement James Ryan – both on the St. Michael’s SCT last season – who came on at half time to make his debut and who underscored why he is regarded as such a top-notch prospect.

James is a son of former Lansdowne double-winning (1986) captain, Mark Ryan, and already has the physique and skills to handle himself at this level. Most definitely a talent to watch!

All these second half heroics seemed a dim and distant hope during a first period that was dominated by the visitors and, in particular, their talented young out half, Joey Carberry, who cut short his UCD career after one season to transfer to the Northsiders.

It was Lansdowne who opened the scoring with a well-struck Scott Deasy penalty awarded 6 meters in from the left-hand touch line just outside the visitors ’22, the home side playing with a swirling breeze which was generally in their favour. Deasy was subsequently unable to capitalise on a great Mark Roche break out of defence with a penalty from the ten metre line, however, and Carberry struck the first of his six successful penalties to level affairs after 16 minutes.

By this time the unfortunate Foster Horan had limped off his wing with a leg injury, and he must now be a doubt for the trip to the Dubai International 7’s next weekend.

Clontarf, with No.8 Anthony Ryan and tight head Royce Burke-Flynn prominent, began to turn up the pressure, but conceded a further penalty at a scrum in front of the sticks which saw Deasy on target again for 6-3 after 18 minutes.

This was to be Lansdowne’s last input of significance before half time, however, and ‘Tarf dominated the second quarter. Carberry kicked a second penalty from the 10 metre line to level at 6-all in the 27th minute and then a great cut by the out-half from a poor Lansdowne defensive clearance set up his half back partner Sam Cronin for a well-worked try and an 11-6 lead after 32 minutes. Lansdowne conceded a string of penalties under pressure up to the break, two more of which were converted by Carberry to leave the visitors 17-6 ahead.

The half time pep-talk from Coach Ruddock worked wonders to rejuvenate the Lansdowne team, and they came flying out of the traps to get amongst a startled Clontarf pack. A great take by full back Eamonn Mills led to a penalty after 43 minutes play and a line-out deep in the visitor’s ’22. Two mauls later, it was flanker O’Brien under the posts to leave skipper Deasy with the easiest of conversions and the lead cut to 17-13. Visiting full back Robert Keogh was sin-binned for a shoulder tackle in the build up to the try.

Tom Farrell then set off on a mazy run which was carried on by his lively centre partner Mark Roche, but the chance was lost. Deegan and Ryan, 37 years old between them, teamed up to win a valuable turn-over penalty and Deegan then made a good break, but was put into touch on the ‘Tarf ’22.

The Northsiders were by no means a spent force, and the next 15 minutes saw both sides square up to each other with neither able to make the telling blow. Deasy and Carberry traded penalties for 16-20 after 73 minutes, the latter for prop Jack Barry not releasing, and it looked like Clontarf would hang on, particularly as Carberry tacked on his sixth penalty to extend the visitor’s lead to 16-23 in the 79th minute.

This new-look Lansdowne team has learned not to give up from its predecessors, however, and they continued to take the fight to the opposition as the game entered injury time. Building momentum down the left, Lansdowne were deep in the Clontarf ’22 when Clontarf and Leinster hooker Aaron Dundon was red-carded for punching Lansdowne sub-winger Finn Gormley. The resultant penalty into the corner saw the line-out won and a series of rolling mauls moved play infield.

The Northsiders were defending desperately, and a further yellow card followed for second row Tom Byrne after 86 minutes play for killing the ball under his own posts. With the opposition down to 13, somewhat surprisingly Lansdowne took a tap-and-go from the resultant penalty rather than a scrum. However, their last gasp, dramatic efforts were rewarded when back-rower Joe O’Brien again powered his way over 20 meters to the left of the posts. Captain Deasy coolly added the extras and Lansdowne had snatched a draw from a most unlikely position and preserved their home run of 12 matches unbeaten in the League which now stretches back over a year.

This fresh young Lansdowne team had to dig deep for this result, and will undoubtedly benefit from the experience. Next up are crucial back-to-back games against Ballynahinch, with the away leg next Saturday in Co. Down. Two season-defining matches for the Headquarters Club, whose players would really appreciate your support up North!