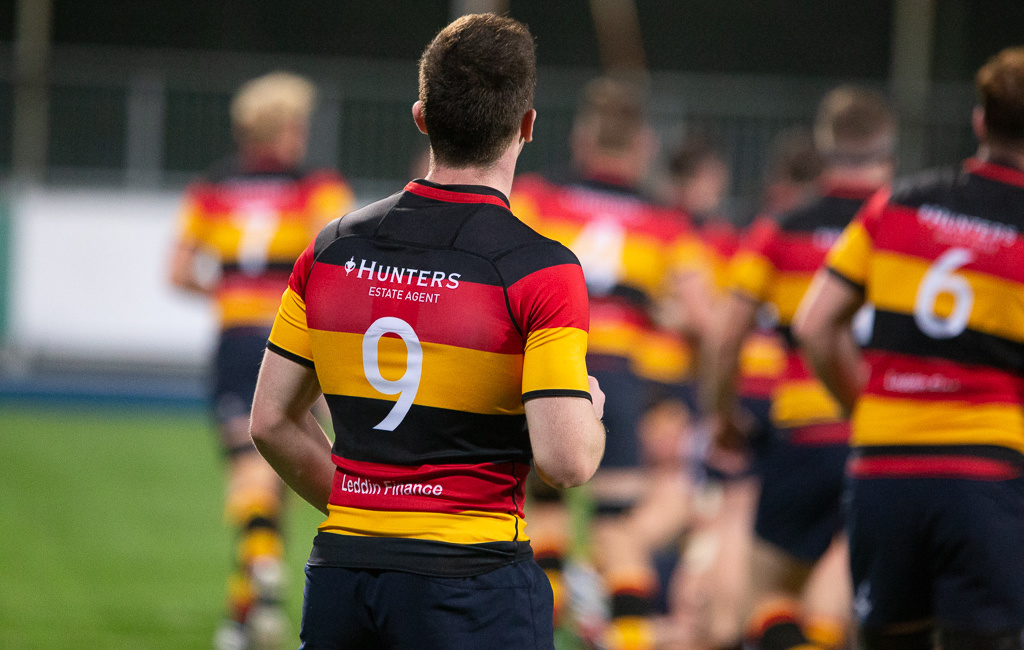 One of those two matches was away to Garryowen, when the light blues ended Lansdowne’s twelve match winning streak in Dooradoyle last February.

Coach Mike Ruddock alluded to this in his pre-match interview: “We only lost two matches all season last and one of those was down in Garryowen, so we know how tough it’s going to be. It’s going to be a warm welcome down there!”

Coach Ruddock also mentioned that Garryowen would be seeking revenge for their defeat in last season’s AIL semi-final at the Aviva, so there would be plenty of rivalry there, too!

This much anticipated repeat of last season’s semi-final was due to be played at the Aviva but, due to the soccer international against Denmark, the fixture was reversed and Lansdowne will thus have played three away matches in a row by the time they take on UCD in the Belfield Bowl next Friday night.

So, a difficult start to the League for the reigning champions and a challenge last Saturday that wasn’t helped by incessant rain and a resultant greasy ball. The home pitch stood up well to the challenge, but open rugby was at a premium as both sides sought to slug it out up front.

Lansdowne were bolstered by the availability of last season’s star second row, Jack Dwan, home from London, although given his lack of match practice it would be unfair to have expected him to rise to the heights of last season’s performances.

Nonetheless, Dwan put in a solid shift in a hard-working Lansdowne eight which had the whip hand in the scrum, winning 5 penalties, and a lineout that worked well given the difficult conditions.

Indeed, this was a match that Lansdowne could have won. They dominated the early exchanges but failed to turn possession and territory into a substantial lead. This was something that they would come to regret as the match progressed.

Out half Scott Deasy converted three excellent first half penalties after 12, 36 and 42 minutes, bur this was scant reward for the possession won. A less adventurous game plan and more kicks to the corners might have paid dividends, as possession was at times proving a liability due to the testing conditions.

On their first excursion into the Lansdowne half Garryowen gained a touch just inside the visitors ’22.  A well-executed line-out maul saw home hooker Liam Cronin, younger brother of Leinster’s Sean, driven over the line for a valuable try which was converted by promising young centre Peadar Collins after 33 minutes.

Lansdowne thus led by a slender two-point margin at the break, 9-7, and it was, in reality, anyone’s game for the taking.

The visitors spilt the ball early after the restart, and Garryowen broke through, kicking deep into the Lansdowne half. This led in turn to a home penalty and Colling duly obliged with a neat kick from 35 metres out to nudge his side ahead 10-9 in the 44th minute.

To their credit, the Headquarters club responded, and an incisive thrust by Harry Brennan saw the centre get close to the Garryowen line, only for the ball to be held up and a five-metre scrum awarded.

Given Lansdowne’s frequent scrummage penalty awards up to that stage, there was a real prospect of some return from such an attacking position. However, the referee penalised the Lansdowne hooker, Tyrone Moran, who had an excellent match, for not striking for the ball and a genuine points opportunity went a-begging.

An excellent counter-attack led by full back and captain Eamon Mills and carried on by winger Daniel McEvoy after 62 minutes saw Lansdowne again in the home ’22, but the attackers were penalised for not releasing.

A further penalty to Lansdowne again took them into the Garryowen ’22, and this time they were not to be denied. Their line-out maul functioned perfectly, and the home side were driven over their own line for sub-hooker James Rael to emerge from the heap of bodies with the ball.

Scott Deasy was unable to convert, but Lansdowne were 14-10 ahead after 65 minutes and were looking good to drive on and secure the win.

Instead, it was the home side that seized the initiative, assisted by some poor decision making and errors by the Dublin side. Garryowen camped themselves in the Lansdowne ’22 and began to squeeze the visitors through a series of penalty line-outs.

This ongoing series of plays saw no less than 3 Lansdowne players – the hard-working Willie Earle, Scott Deasy and then sub-hooker James Rael – all yellow-carded as the referee punished Lansdowne with a hitherto unseen fervour.

Reduced to 12 men, Lansdowne continued to defend heroically but finally the dam burst and No. 8 Sean Rennison breached the stretched visitor’s defence with a try in the 87th minute which Collins once again converted.

The final whistle followed the conversion, and Lansdowne were left with the consolation of a losing bonus point; scant reward for their efforts on an afternoon when the weather and the rugby Gods did not smile on them.

All told, this was a better Lansdowne performance than in their opener against Clontarf. There is little doubt but that better days in the League lie ahead, and the challenge to the character of this fine side will emerge as they respond and show their true mettle.