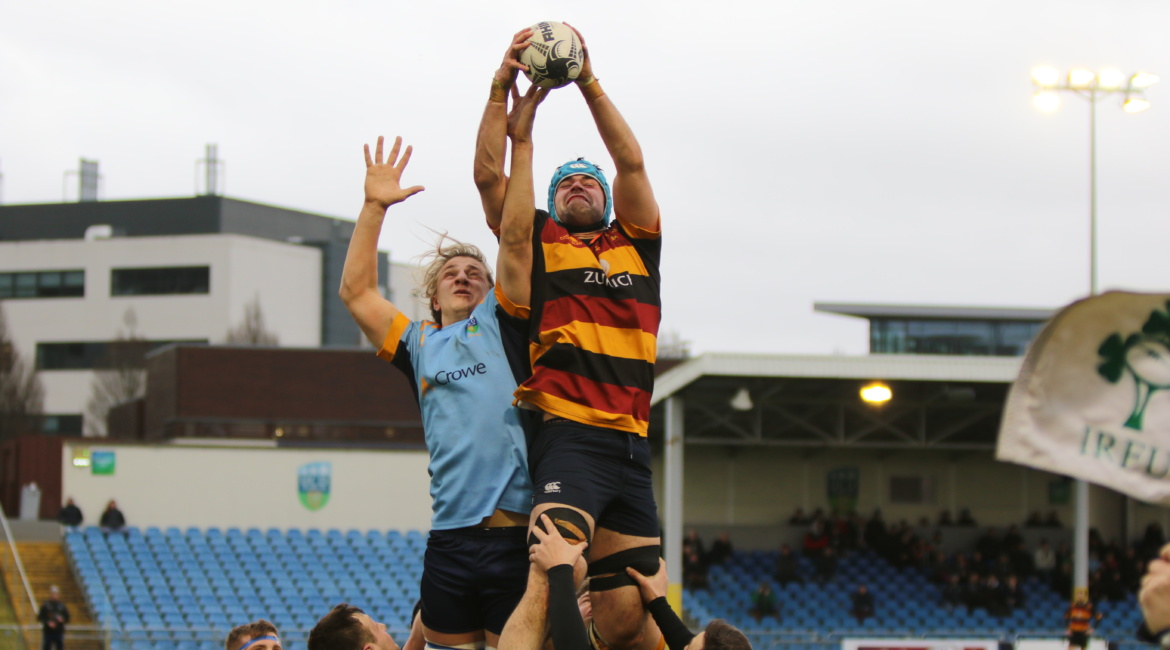 The Metro J1 final took place in Belfield Bowl on Saturday afternoon and what a close encounter it turned out to be between two very well matched teams who had finished the regular season with only a point between them in the league table.

Pitch conditions underfoot were dry but a strong wind meant that this was going to be very much the game of two halves with the side having the wind advantage dominating territory and field position as a result. UCD had first use of the wind and clever touch finders meant that they were on the front foot very early on although they missed an early penalty chance to take the lead in tricky wind conditions. However, shortly after following a kick and chase and a favourable bounce, they took the lead with a well taken try. They were starting to build momentum and continued dominating the field position following a series of penalties, one of which led to a UCD penalty, which increased their lead to a 8-0 advantage. This pattern continued and Lansdowne found themselves down to fourteen men following a yellow card to centre Tom Monaghan. This was followed a minute later by a further yellow card to the other centre Conor Murphy. Faced with this great adversity, the Lansdowne forwards knuckled down but could not prevent a further UCD try which followed a cross kick which was gathered and following a phase resulted in College increasing their lead by seven with a successful conversion.

There was still time to play in the first half and the Lansdowne team reacted to their shortage of players with great determination and skill and repeated pick and go plays ended the sin binnings. Lansdowne for the remainder of the half took the game to their opponents and but for one pass almost replied with a try of their own. However, despite conceding a large amount of penalties, the half ended with UCD leading by 15-0.

The second half began like the first with the team with wind advantage taking over field position and territory. This time it was Lansdowne’s turn and they started to put pressure on the home side who defended resolutely and with great skill. However, the pressure plays continued and towards the midway point of the second half, the pressure told with repeated phases leading to a back movement where William Walsh breached the defence to touch down with the conversion being landed by Peter Hastie.

The tide had turned and Lansdowne fought back. Five minutes later after obtaining a good field position, the Lansdowne pack went to work hammering away at the UCD defence which after a series of plays led to a number of rucks near the UCD goal line with scrum half Finbarr Crowley snipping through to touch down with Peter Hastie converting to the score at 15-14 with time to play. UCD to their credit now knuckled down and retained the ball well bringing the clock down.

Lansdowne continued to dominate field position and pressurised the home side who competed with great effect and skill and repulsed every effort Lansdowne thew at them. A late drop goal attempt was narrowly wide from Lansdowne but UCD held on to be deserved winners in a very close game between two teams maintaining the high standards that are needed to win the Metro League at J1 level.