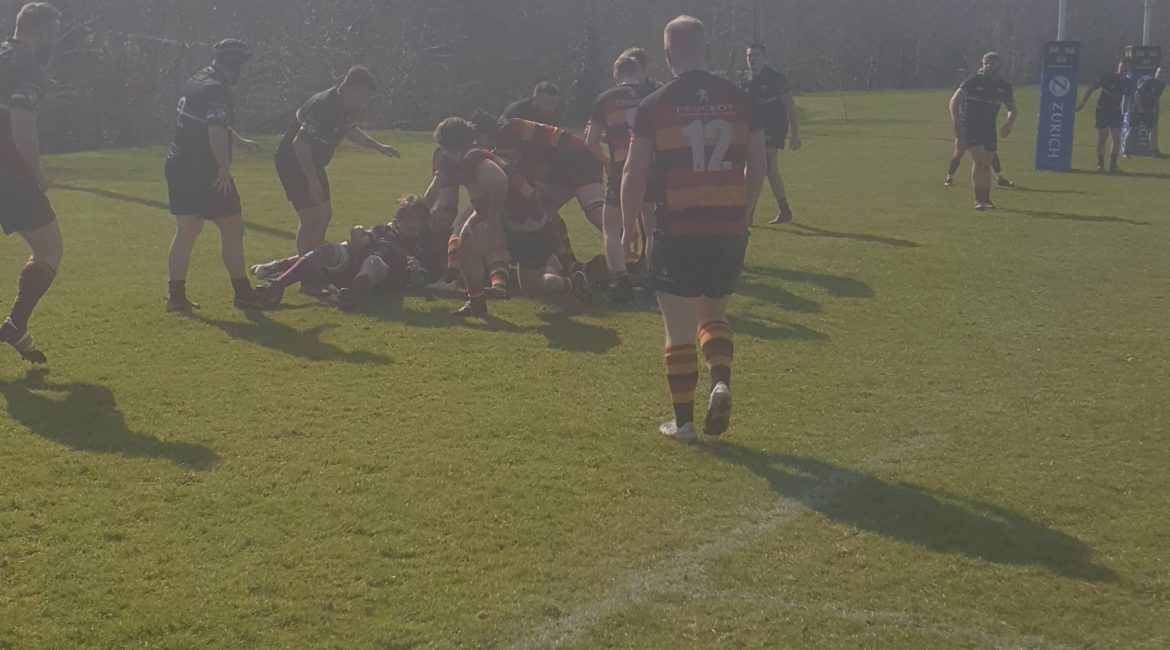 There really is never a dull moment with this J2 squad. Perhaps a bit like the French national team, their performances vary quite widely, depending largely on “which side turns up”.  Well there’s no doubt it was the Albert O’Connell Cup Holders that turned up to Ballycorus on a scorching Saturday afternoon in all their sparkling glory and demolished their Stepaside neighbors like true champions.

It wasn’t all plain sailing, though. In typical superlative manner, the home side started by conceding what must have been the worst try of the entire season. By any team. (Spoiler alert – I’m naming names here …).  From a line out at about halfway, their prop – yes, their PROP – peeled off the back of the line out and ran around and a little bit over … brace yourselves … number 8, Donal Liddy (I know!!) leaving him face down in the dust. From there he (the PROP, remember) side stepped centre Oscar O’Cleirigh (!!) and ran the next 30 metres unbothered by any Lansdowne defenders. Then it was full back, Daragh Dennehy, or maybe centre Ross Bailey Kearney, or winger Sean Neary that suffered the final indignity of letting him past them to score under the post. No one owned up to it, so they all share the blame!

Immediately after our “champions” went down seven points in such a shameful manner, the game produced even more entertainment. Salmo had a penalty kick to touch which seemed to be falling short and second row Aaron Daly ran from 10 meters off the pitch to jump up and volley the ball back in to play. Some touch judges might have raised an eyebrow if not a flag, but not our man Rob Timlin.  “Looks fine to me, ref!” he grinned with his thumb up optimistically.  Daly’s volley from somewhere in Cabinteely was taken by winger Danny Hogan who pelted down the touchline and in fairness to him, he was actually in field at least half of the time.  But another “Looks fine to me, ref!” thumbs up from Timlin and the ref let play continue, apparently deaf to the visitors’ wailing. But if there was some doubt as to whether Daly and Hogie were in touch, there can be none whatsoever about where scrum half and captain Rob Kelly’s twinkle toes were after he took the final pass from Danny and went over in the corner. To preserve his now exhausted thumb, Timlin ran straight beneath the posts to receive the conversion!  The ref did wander over briefly to the touchline as if to try to conjure up a magical TMO in his head, but just commented to those of us on the sideline, “it looks like it’s going to be a close match, so I’ll give the touch judge the benefit of the doubt!” (True!).  Don’t you just love referees?!

“Wild” Bill McNamara, back at 10 after nearly the full season injured, topped the improbability of our opening try by converting it with a magnificent kick from the corner. 7 – 7.

What followed for the rest of the afternoon was what can only be described as a riot of excellent rugby.  Bill was straight back in the heat of battle from the restart, gathering the ball from a ruck and hoofing it from well inside his own half to just outside their 10 meter line for a 50:22 and our throw in.  We won the lineout cleanly and Daly peeled off the back, managing to get low enough to the ground near enough to the line to let his telescopic arms do the rest and he tipped it down for our second try in ten minutes.  Bill did the honours again and it was 14 – 7.

And there was more to follow.  Rob Kelly got his second in a typical sniping break from the back of a ruck and his outhalf Bill converted again making it 19 – 7.

But De La Salle Palmerston came to play and they spent the final 10 minutes of the first half launching attack after attack on our line.  Stung by the errors of the first five minutes, perhaps, our defence was robust and vigilant and the visitors’ attacks (especially that prop’s) were nipped in the bud every time and we went into the welcome break 19 – 7 ahead.

The heat was scorching and many players would sport a shiny Irish glow from the sun later in the evening at the club dinner, but if they were suffering, they didn’t show it in their play.  Having apparently rested our “Offensive Line” in the period up to half time, we started the second half all attack guns blazing. In a blistering series of phases, we stretched their defences this way and then that, leaving gaps, here and well there.  It was of course Liddy who was the first to exploit one of those gaps as he burst through some flailing arms and ran the final 20 metres to the line.  Bill slotted it over again and it was 26 – 7.

Our dominance continued, but we were kept from the line for a long period by Salmo’s brave defence and clever tactical kicking. So, when we got a penalty just inside their half, super boot-Bill, now burnt to a crisp, decided we all needed a bit of a rest and struck it beautifully for another three points. 29 – 7.

This seemed to be the straw that broke the back of Salmo’s resistance, and the game was a one-sided affair from then on.  In the spirt of their French alter ego’s, the J2s opened up the style drawer and produced all the élan and panache we know they were capable of. No passage better illustrated this than the next try. Again, a series of phases and breaks dragging the best out of the now exhausted visitors’ defences left Dannie Hogan charging down the wing with only one man to beat.  Did he go inside? Did he go outside? No, he chipped it over his head and beat the scrambling defender in a chase to the line and tapped it down.  34 – 7

Next it was Liddy’s turn for his second to purge the memory of their opening try. And finally it was full back and demon counter attacker Daragh Dennehy who  scored, wiping clean the memory of the opening try. A conversion by Danny Hogan – Bill having retired to the shade and some aprés sun –  put the final nail in the coffin of the visitors.  46 – 7

Happily, Lansdowne and Ireland legends Mick Quinn and Rory Moroney were there to witness this display of champagne rugby. At one stage Mick called out “this is fantastic rugby!” in a somewhat surprised tone of voice.

Someone said, “you sound surprised, Mick”.

“Bloody right I’m surprised”, he retorted. “I saw them play in Barnhall before Christmas!”

But that’s the French for you!

Next round v Gardai at LFC HQ on Saturday 2 April, 5.30pm after the 1st XV AIL game v Terenure – come and support! 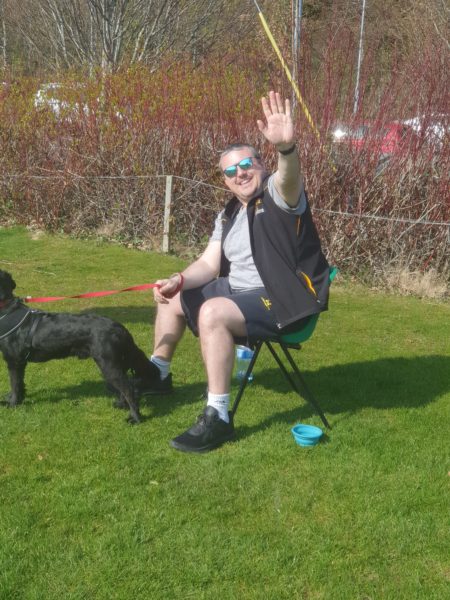 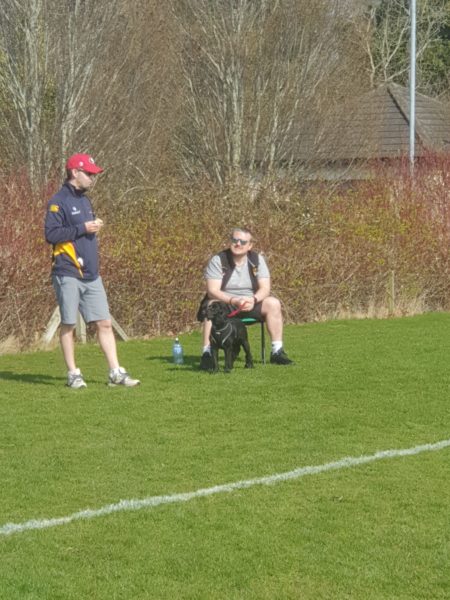 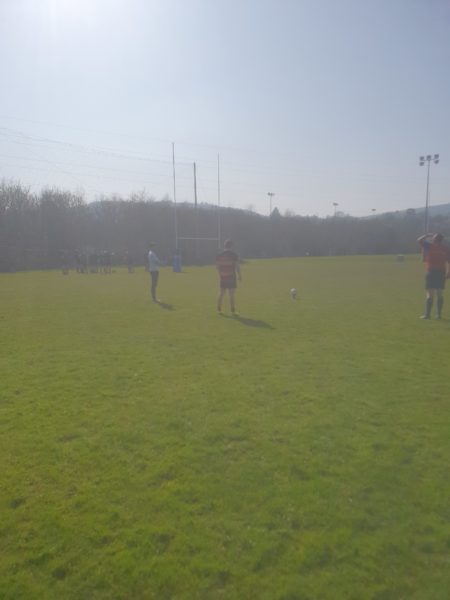