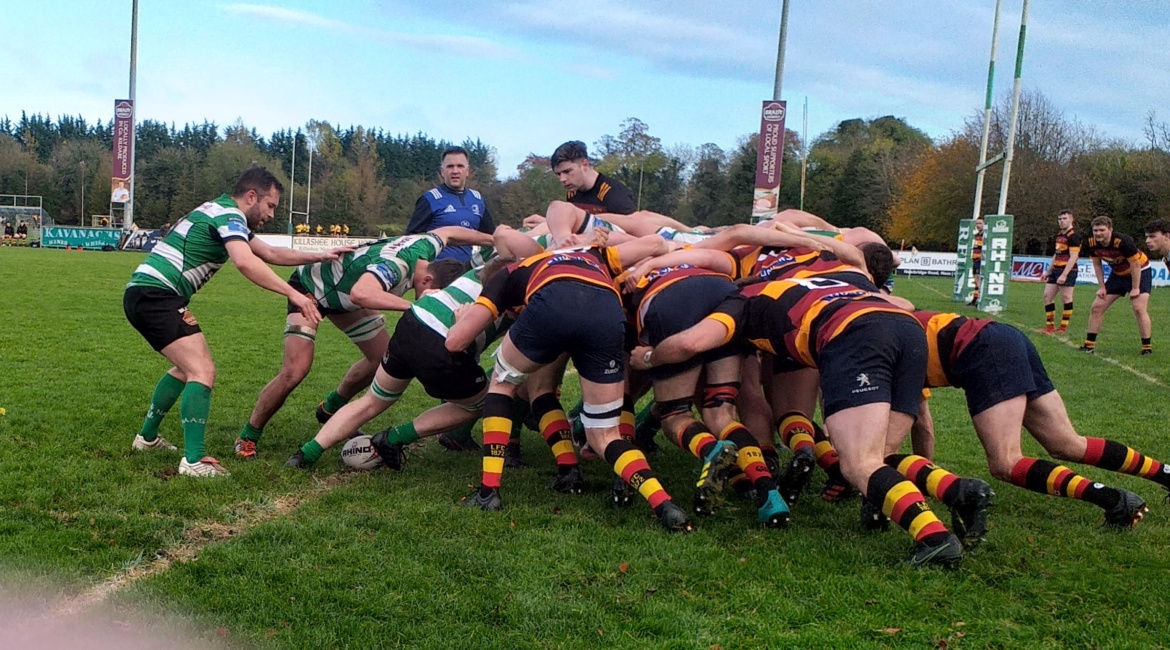 On these occasions, we sometimes reflect that “the scoreline didn’t reflect the game”, but sadly last Sunday in Naas it did.

Yes, a much bigger Naas pack were utterly dominant in the scrum from the outset and their backs’ handling seemed flawless at times, but Lansdowne’s undoing in this game was a series of rookie errors in defence, coupled with a lacklustre approach to making up for them.

Naas opened the scoring with a penalty after 10 minutes, but it was cancelled out in style by a try from the rocket powered and refreshingly aggressive running of winger Ger O’Connor. Will McEvoy converted and hopes were high that our skill and determination could compensate for a physical disadvantage, as we’d done so often before.

But the Naas machine ground into gear and they scored one, then a second try directly from their juggernaut of a scrum within five minutes of the half hour mark. 13 – 7. Their kicker seemed to be keeping us in the game with his wayward attempts and then Pierre Poulard gave us further hope when he snatched an opportunist try with a speedy run up in defence, knocking down a clearance kick and pouncing on the ball. 13 – 14 and maybe we can take this game.

But our grip on the game was slipping as we approached the break.  Now, as well as their imperious pack, Naas also created and ruthlessly exploited gaps in our outfield defence, scoring tries from counter attacks just before and just after half time. 27 – 14.

The game wasn’t a complete wipe out. In the final quarter we started to play with the style and industry for which this group is known and we steadily worked up the pitch to inside their ten metre line.  A penalty on ten metres, quickly taken and the hard-working lock, Shane Dalton breaks off the side of the ruck and passes a majestic off load to prop Ferdia Lyons finishing off a much better run of play. 27 – 19.

And though our play was still a little patchy, Naas too were tiring on the heavy pitch as we entered the closing five minutes and lay siege to their line. A try and penalty might have been too much to hope for given the remaining time, but at least gaining a losing bonus point looked possible … until that is … yes, another error from us and a counter attack from Naas gifted them a last minute try.

Against a big, well organised and mobile team like Naas you have to bring your best.  On Sunday we didn’t; but when we meet them again we will.