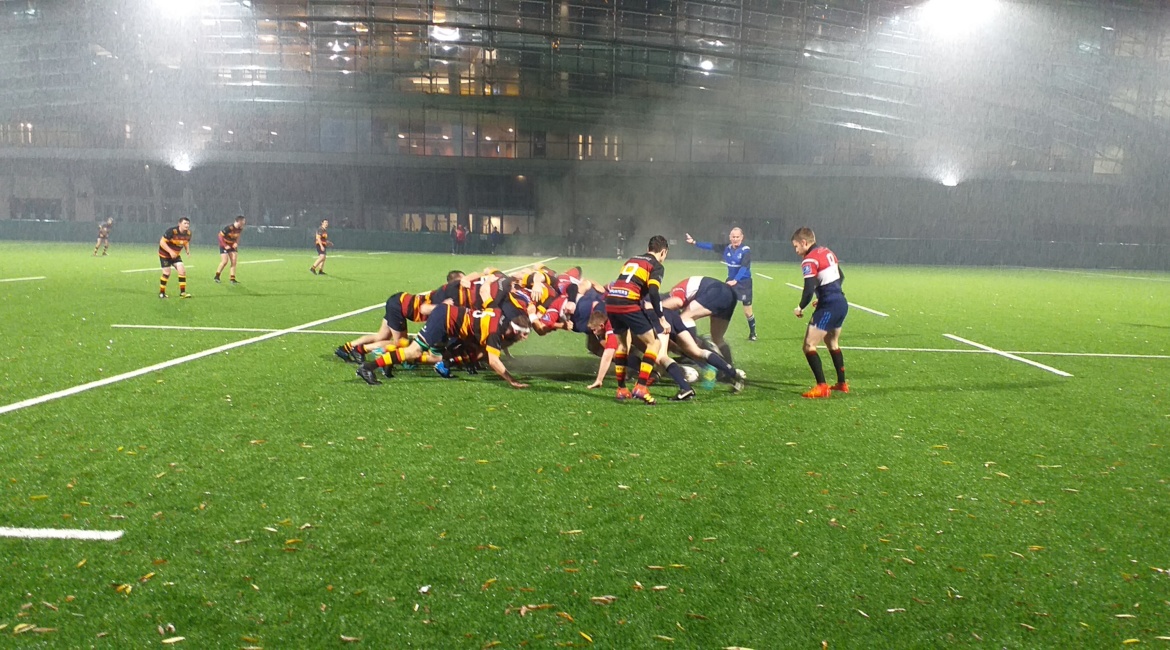 Tropical rainfall all night long should have led to a dull game of attrition in the forwards, but no one told either of these enterprising teams and so the sodden spectators were served up a surprisingly savory treat of rugby.

The opening stages showed signs of things to come: the ball was like a bar of soap and so possession changed hands several times with both sides struggling to get a firm grip. First blood went to Wesley with their kicker squeaking a terrible strike over the bar – a baffling feat he would repeat twice more over the course of the game.  But our response wasn’t long in coming as we robbed the ball back straight from the restart and ran phases deep into their half, drawing their cover first left, then right … then the ball was taken from the foot of the ruck by “some young fella” Conor McAleer and he combined speed, power and composure to run the 20 meters for try under their post.  John Delany converted, striking the ball the way it should be struck.  7 – 3.

Wesley’s kicker worked his weird magic with one penalty bouncing off the post – 7 – 6 – then another clearing the bar by millimetres to give them the lead of 7 – 9, before our man JD pegged them back with a swing and strike Rory McIlroy would be proud of 10 – 9.

The remainder of the half was something of a scrum-fest with our lads holding their own well against a bigger pack. We had the edge with our overall play, so it was a cruel blow when Wesley scored in the corner with well worked kick through and follow.  10 – 14 just on the half time mark.

And as the second half resumed, still in the unrelenting downpour, the visitors also continued their assault and got another try, 10 -19.

But even in the terrible conditions, we never stopped playing. Credit to the other “young fella” Michael Kearney O’Brien and a few old timers who also put in great shifts, Robert Timlin and the indomitable Gaul, Ludo Amblard.  Good to see Diarmuid Morrissey back in the Lansdowne jersey after his extended holiday.

Our steady play yielded some reward as JD stroked over another well taken penalty and with five minutes left on the clock it was again a one score game, 13 – 19.  But in spite of our best efforts, Wesley held us out and we settle for losing bonus point and our pride in a good performance well intact.