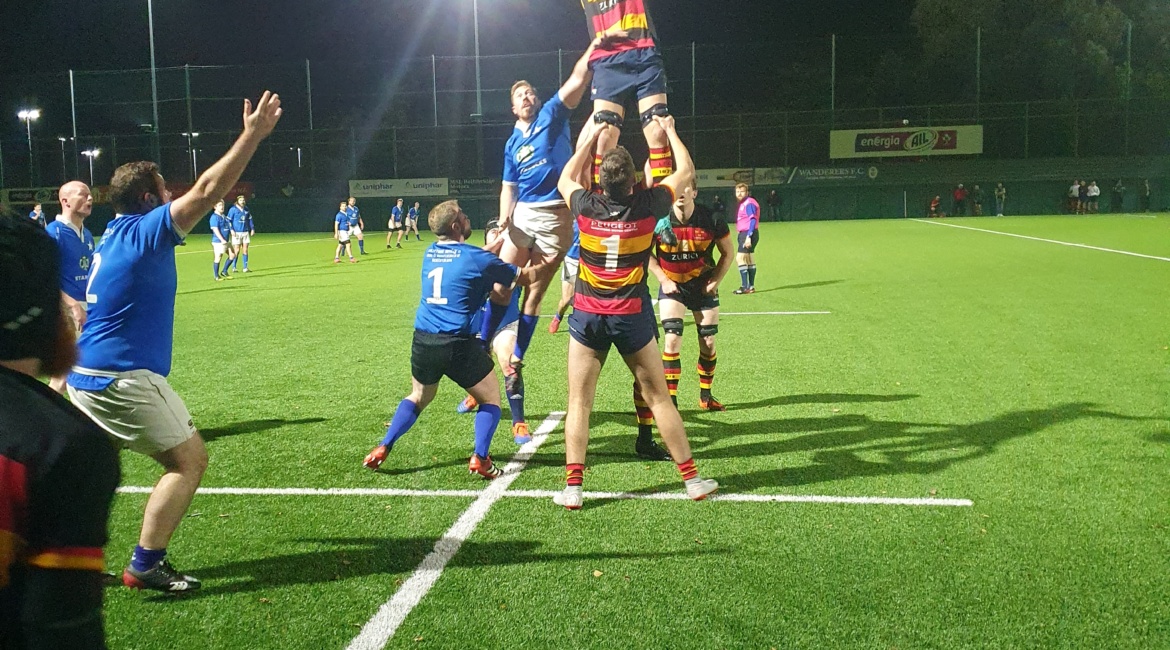 In spite of scoring three great tries and playing some solid rugby, Lansdowne J3s’ concentration let them down in the closing stages of this gripping encounter, giving the visitors the win they probably deserved.

Watched over by the Sexagenarians (not as much fun as it sounds, there was a lunch for the Over 60’s in the clubhouse earlier), the J3s opened the evening with their usual gusto and attacked the Marys’ half with assurance. Their efforts were rewarded after just over five minutes with a penalty converted by Rob Troy at outhalf. 3 – 0.  But rather than drive home our early advantage, we let the tempo drop and allowed Marys to gather themselves enough to set up camp in our 22. They turned their territorial advantage to account when they scored and converted on the half hour. 3 – 7

After that, we renewed the tempo we had started with as if awakened from a deep slumber and captain Rob Timlin scored in the corner after a series of well worked phases.  8 – 7.  This forward-led endeavour was followed soon after by a score straight out of the backs’ top drawer.  We renewed our station in their 22 after the restart and the Marys outhalf (and manager and physio, I think) cleared the ball from his 10-meter line all the way to our halfway. Mercurial as always, full back Jonny Hill caught the high ball (difficult on a drizzly night under lights) and instead of releasing it to the open side where there seemed an abundance of cover, he opted for the less obvious short side, where three Marys tacklers lay in wait. But Jonny wasn’t alone: from the murky shadows, the swarthy image of right winger Ethan Bradley at full pelt came rapidly into light. Jonny drew the first tackler and let loose a perfectly timed pass into the line between the remaining two defenders, which Ethan gratefully caught and crashed through to go over the line. 13 – 7 and half time.

But yet again, we failed to consolidate our advantage and Marys started the second half with all the fury of a woman scorned (“Hell hath no fury …” remember? Oh, never mind.). They camped again in our 22 and within ten minutes of the restart scored a try. 13 – 14. Now the specter of poor discipline reared its ugly head again. We conceded several penalties in succession and with them eventually another penalty kick and a yellow card. 13 – 17.

Just before the water break, however, that man Ethan Bradley finished off another well worked series of phases, scoring his second in the corner and bringing the score to 18 – 17.  By now the pattern was clear. As soon as we did something good, we relaxed and acted as if we had a 20 point lead and less than a minute to go. So, within moments of regaining the lead, we found ourselves back on our own line. Manfully we defended our line and when the ball was cleared into the Marys’ half well into injury time, the home sideline breathed a sigh of relief (and most of the sexagenarians inhaled deeply from their oxygen tanks).

But no. True to the erratic performance of the night, we let the visitors back into our danger zone, a series of attacks (and more penalties) were defended but the visitors’ almost inevitable try was scored under the post and the final whistle blew when the conversion went over. 18 – 24 Full time.