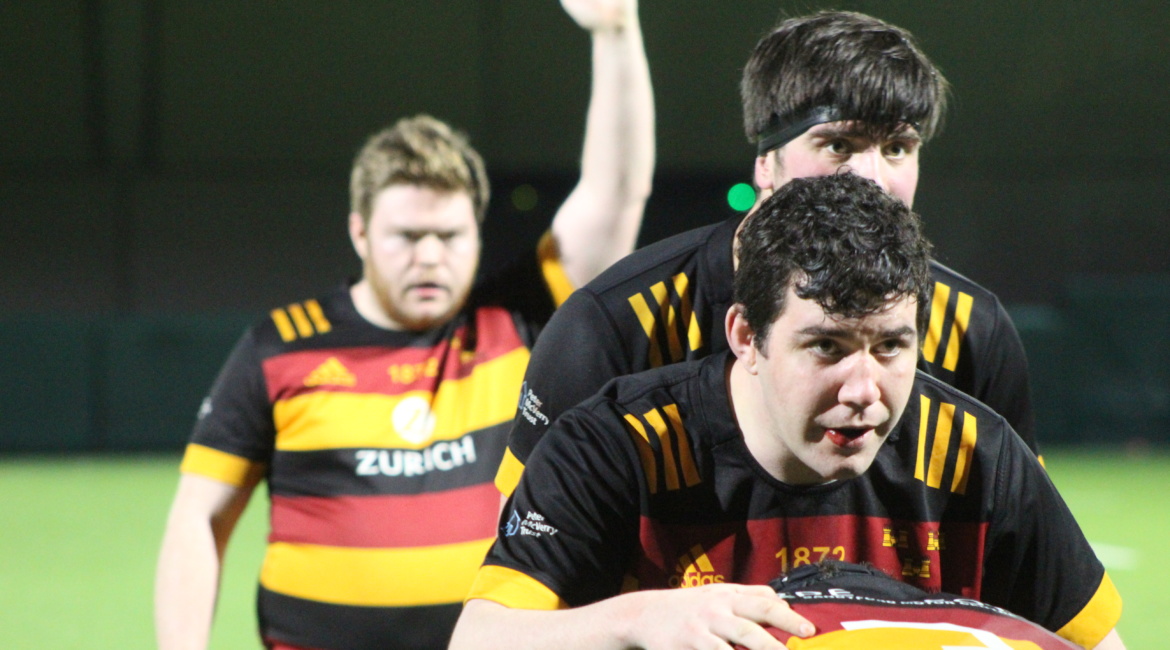 After sustaining two humiliating defeats against CYM in recent encounters, this proud J3 side were keen to put things right under lights at HQ on Friday night.  And didn’t they just.

From the kick-off to mid-way break, by which time we had already got our bonus point fourth try, this was a display of total rugby which left the visitors stunned.  Aggression in the forwards’ attack and defensive rucking, as well as great line speed from the backs meant the opening encounters were all ours with or without possession. Veterans Cathal McNamara and Rob Timlin for example, started like men expecting to be playing for only 20 minutes, but kept this tempo up for the whole match.  CYM did their best to withstand the pressure, but after 10 minutes it was no surprise when scrum half Rob Kelly finished a off multi – phase move with a typically audacious break through the middle of the pitch to go over for his first of the night.

Our kicker (who asked not to be named for legal reasons) opted to let the tries alone adorn the scoreboard for the night and we didn’t have to wait too long when we were treated to another.  Liam MacWhite, playing his last game for the club before returning to Oz, played a “ripper” all night, carrying bravely into CYM’s solid defence and inflicting his own tackling lessons on the rare occasions they tried to break our line. He broke from one of our rucks, got through one tackle and somehow got a 20m pass away to a full back Jack Mulcahy on the wing who still had some work to do to reach the line for our second try of the night.  10 – 0.

Our third came, virtually from the CYM kick out to resume play.  They fielded their own restart, but fearsome counter rucking from Luis Castro and Rory O’Donnell, delivered a turnover and Rob Kelly launched a hefty clearance, bringing play from inside our 22 to inside theirs.  They won their line out, but never had a moment’s peace as we harried and hassled them relentlessly, Cian Elwood and Pat Chapeau showing that they have destructive streaks for such otherwise gentle giants. And so the CYM scrum half, struggling to get clean ball, should have been less casual about his attempt at a clearance and he was duly blocked down, by who? … that man Rob Kelly again, who snaffled the ball up and went over for his second and the team’s third of the night.  15 – 0.

And we weren’t finished for the half. As the clock approached the 40 minute mark, winger Ethan Bradley gratefully finished another series of phases with a beautifully taken try in the corner.  20 – 0 and the bonus point. Thank you very much.

Not to allow us a clean sheet on the break, CYM ran a few pick and go moves and went over for a try a few minutes into injury time and the half time score was 20 – 7.

CYM started the second half as they finished the first, full of resolve but devoid of any style or variety. They persisted with the pick and go down the middle and their perseverance was rewarded with another try and conversion ten minutes into the second half, giving the score line a very flattering look for them of 20 – 14.

But even if our energy waned for a little while, we never lost our willingness to play the full width of the pitch, stretching the visitors left and right before centre Joao Vierra darted through on a great line from a perfectly timed pop pass from his partner in the centre Cathal Boyle.   Substitute Cian Mulcahy mustn’t have received the memo about kicking for the night and slotted over the conversion bringing us to what would remain the final score, 27 – 14.

.@IrishRugby has published a summary roadmap for a Return to Rugby in Clubs.

.@IrishRugby has published a summary roadmap for a Return to Rugby in Clubs.