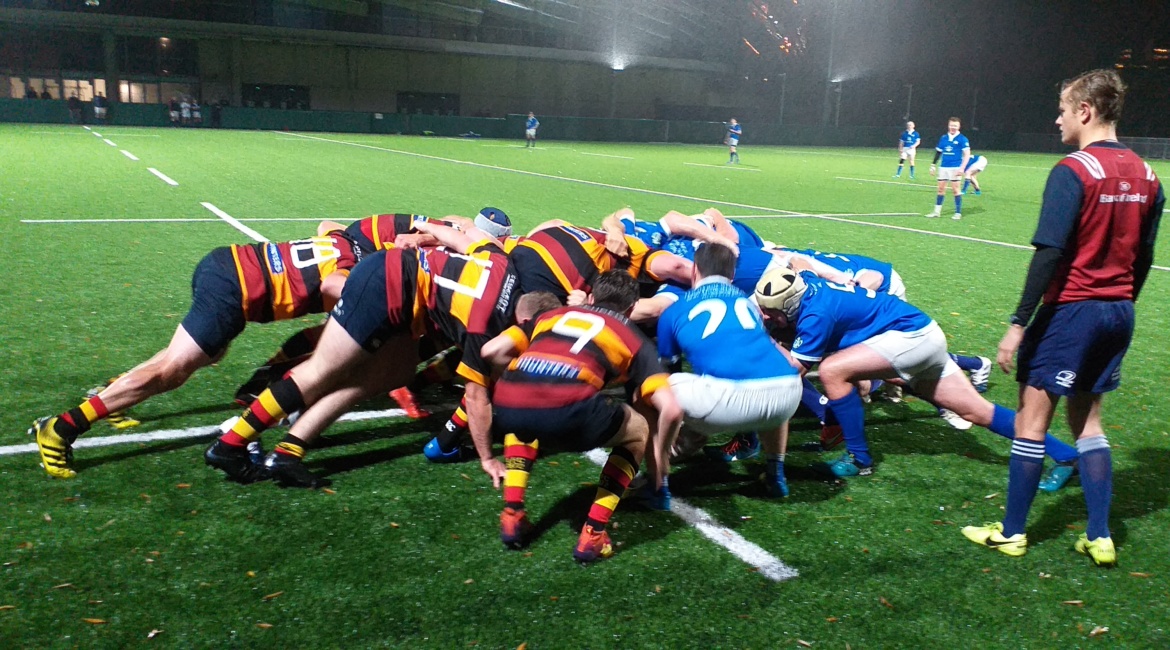 Yet another great advertisement for “Friday night lights” rugby was enjoyed by the happy few who watched from the warmth of the balcony as Lansdowne and St Marys served up a six-try spectacle last Friday 1 November.

Before the rains came, both sides opened with feverish intent, first Lansdowne repeatedly coughing up possession in the mauls to a hungry Marys pack, driving the home side to within our own ten meter line, then Marys conceding two penalties in succession allowing outhalf Michael O’Malley peg them right back to well within their twenty two.

After 10 minutes of this tit for tat, the first blood went to Marys when they slotted over a penalty. Things seemed to grow more ominous as the mist turned to rain and our captain Rob Timlin went off with a back injury.  But Rob’s able replacement Shane Kennedy and then a penalty from Alex Caslin settled the nerves to bring the sides all square and also mark the opening of a period of Lansdowne dominance that would define most of the game.

Pegged in their 22 for attack after attack, a Marys’ defender mis-kicked a clearance attempt which was gratefully gathered by the indomitable Ludovic Amblard who lunched his own gallic charge at the line. The quick and short ball from the ruck by Aaron Grogan (also quick and short) set up Michael O’Malley’s excellent straight line run over the line. Alex converted and it was 10 – 3 as we neared the half hour mark.

Less than five minutes later versatile open side flanker, Luis Castro wrestled a ball from a loose maul and went over for our second try. Again, Alex’s boot was on the money and we started to pull away 17 – 3. Our purple patch continued when newcomer Nelson Van Rosmalen had his own hard work rewarded with another break from the side of a ruck for his first Lansdowne try and yet again Alex did the honours.

It was 24 – 3 as half time approached and we seemed rampant. Another visiting team might have limped into the break and hoped for inspiration from the coach, but not so this competitive Marys side. Even as we were playing our best rugby of the season, Marys kicked their way back into our half for the first time in nearly 30 minutes, won the lineout and completed many phases with an excellently taken try in the corner.  24 – 8 at half time.

And Mary’s started the second half as they had finished the first, scoring and then converting a try. 24 – 15. Nor were they finished their comeback then. Marys launched a sustained attack on us for most of the third quarter of the game and it is a credit to our defence and discipline that we didn’t concede any more points then or for the rest of the game.

Our hopes of a bonus point victory seemed far fetched as we defended relentlessly, but eventually Marys themselves tired of the assault. We won possession back and our composure and in particular handling skill in the teeming rain proved decisive. Full back Rob Manning gathered a ball from his ankles with the tips of his fingers, stepped inside a Mary’s defender and soared over the line allowing Alex another opportunity to convert.

Marys fought to the end and the pressure on us of the last 15 minutes was only relieved by a series of penalties which Alex took his sweet time in attempting, until the final whistle blew.  31 – 15 FT.