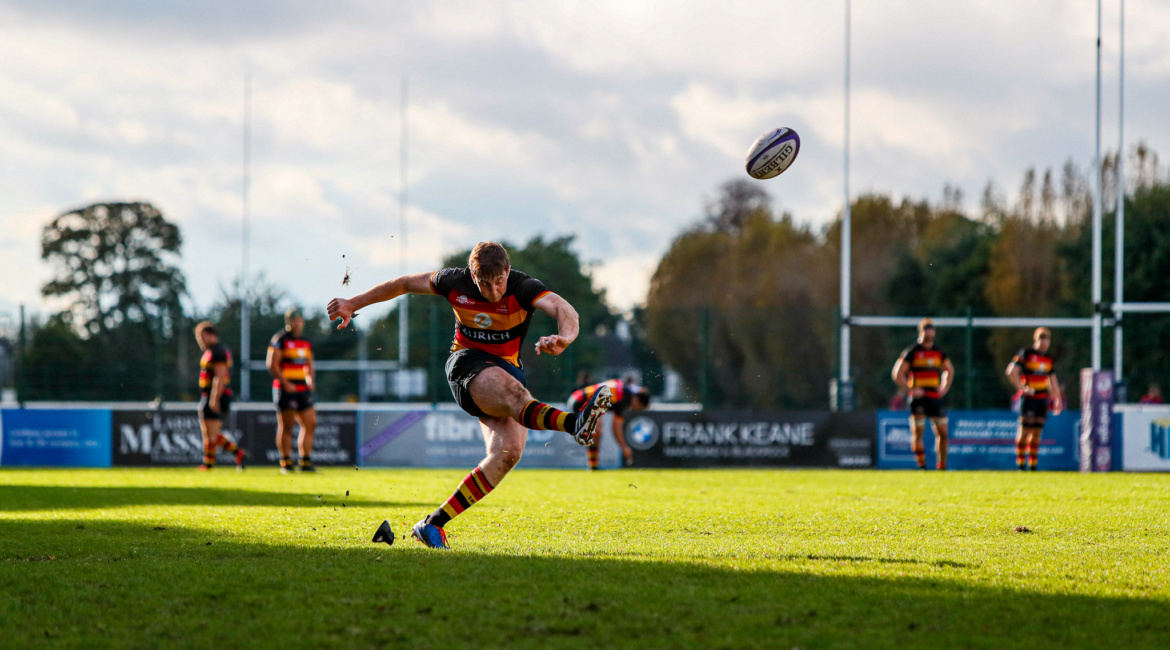 Early days yet, but Lansdowne continued their impressive opening form in the second round of the Energia- sponsored All Ireland League with a hard-fought win against a dogged Terenure side on Saturday in Lakelands Park.

The pre-match selection was disrupted by the loss of out half Peter Hastie due to injury and winger Michael Silvester, who pulled up during the warm-up.

They were more than adequately replaced by Leinster Development XV out half, ex- Kilkenny College man Charlie Tector, and Harry Brennan. Tector, indeed, more than stepped up to the plate, giving a man of the match performance and kicking 14 points in an outstanding performance.

Lansdowne played into the breeze in the first period, facing into the Fortfield Road end of the ground.

Terenure struck first, with a 4 th minute penalty by ex-UCD out half James Thornton. This was neutralised almost immediately by a penalty following a good link-up between Brennan and full back Eamonn Mills, who once again gave an exceptional performance at full back, with Tector goaling from 32 metres to level affairs at 3-apiece.

Lansdowne took the ball on from the restart and set up an attacking platform inside the home ’22. No. 8 Mark Boyle, who has developed into a fine player, broke from the ruck and fed his scrum half, Leinster Academy player Cormac Foley, who crossed for the opening try. Charlie Tector added the extras and the visitors were 10-3 to the good.

Terenure likewise responded almost immediately, taking advantage of a penalty line-out to drive over from 8 metres out with former Leinster player Jordan Coghlan claiming the honours. Thornton knocked over the conversion, and the sides were level again at 10-all after only 12 minutes play.

Terenure were making good use of the elements to gain territorial advantage and their cause was helped by the yellow carding of Lansdowne full back Eamonn Mills for holding.

The first scrum of the match as called in the 24 th minute and was followed seconds later by the second. This was an acid test for Leinster Under 20 prop, Ben Popplewell, a product of St. Peter’s College, Wexford and son of the famous Irish prop, Nick.

Ben quickly showed that the apple hasn’t fallen too far from the tree and gave a strong scrummaging performance over the entire 80 minutes that augurs well for the future, and not just in the Lansdowne jersey. The home side continued to press, and only an excellent tackle from winger Sean Galvin, son of our own Michael, prevented them taking the lead.

Terenure took advantage of their numerical superiority shortly after, as a series of attacks led to a try for winger Craig Adams in the 28 th minute to establish a 15-10 lead for the D6 side.

The Headquarters side were disrupted further through the loss of Paul Kiernan through injury, the Cork centre being replaced by Stephen Madigan. Prop Greg McGrath came on as well and set up a front row consisting of two Wexford props supporting a Wicklow hooker!

The south-eastern trio went on to establish a scrum dominance that was to play a key roll as the match progressed.

Lansdowne’s line-out possession continued to be spotty and a few promising attacking positions were not capitalised upon. In the 38 th minute possession out of touch from a penalty finally came good and lively hooker Luke Thompson was on hand to convert the driving maul into points.

The kick was planted by Tector from 12 metres in from touch, drifting across the breeze for a supreme strike. The visitors had their noses in front and, given the elements and Terenure’s territorial advantage, coaches Mark McHugh and Phil Horan would have been well pleased with the outcome.

Soon after the restart former Ireland Under 20 back row Mark Hernan came on for Joey Szpara, with captain Jack O’Sullivan moving into the second row. Hernan was making a come-back after a lengthy injury break and, unfortunately, his long-awaited return only lasted five minutes before he had to be replaced by second row Matt Healy.

Healy was scarcely moments on the pitch before he incurred the referee’s wrath and was sent to the sin bin. Thornton took advantage to nudge his side 18-17 in front from the resultant penalty on 50 minutes.

The action was coming thick and fast, and the Lansdowne back row of Boyle, O’Sullivan and Clive Ross were performing heroics against the much-vaunted opponents, ably supported by second row Jack Dwan and hooker Luke Thompson. As the match progressed into the final quarter, indeed, the Lansdowne forwards began to assert themselves more up front. This was assisted by the impact from the bench, with replacement hooker James Kavanagh, in particular, standing out.

On 53 minutes an advancing Lansdowne scrum set up a good attacking platform. The ball was taken on and eventually swung right with strong carries by O’Sullivan and Boyle breaching the line to set up the speedy Galvin for a well-worked try in the right-hand corner.

Charlie Tector kicked a magnificent conversion from the touchline to push his side ahead by 24-18 in the 56 th minute.

Lansdowne were guilty of switching off on the restart, which allowed an always game Terenure side to break out from their ’22 and set up a strong counter-attack. The ball was carried into the Lansdowne ’22 and then spun right, enabling winger Adams to cross for his second try of the afternoon.

Entering the last quarter things couldn’t have been tighter, with Lansdowne now leading by just a point, 24-23. The momentum was with the visitors, however, and a flagging Terenure pack had just about given its all.

From an attack on the home ’22, Mark Boyle repeated his first-half breakthrough from a ruck to thunder over under the posts for a stunning solo try and the bonus point. Tector’s conversion was good and Lansdowne were two scores ahead with fifteen minutes to go at 31- 23.

Play had opened up as the match progressed, with movement flowing from end to end. Thornton and Tector exchanged penalties before, fittingly, the visitors had the last word. Terenure were penalised for going off their feet and an extra 10 metres added for a bit of back chat.

From the resultant lineout deep in the home ’22 the ball was worked wide to the right for full back Mills to seal the victory with a try in the right-hand corner.

39-26 ahead, Lansdowne were still hungry for more. A great break by returning scrum half James Kenny almost led to another score and play ended up with the visitors pressing hard as their opponents wilted. A great win, and great promise for the long and hard campaign road to come.

On our travels again next week – to the Mardyke, to take on the Students of UCC. Wouldn’t it be great to see you there!