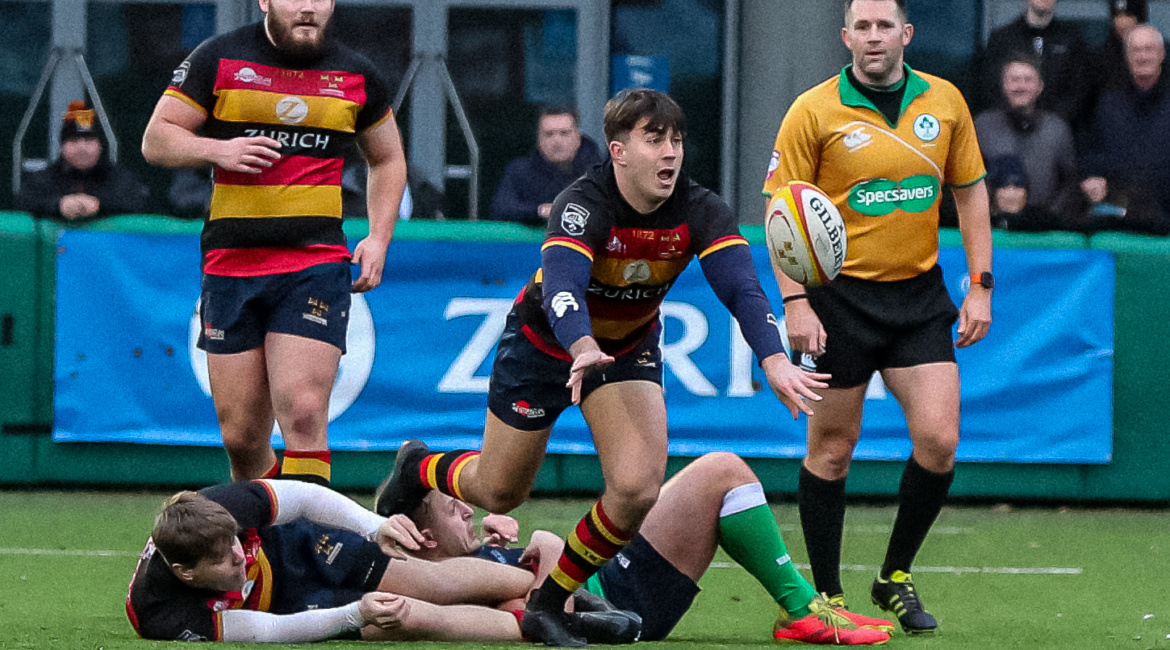 What a difference a week makes! Having lost to a fully locked and loaded UCD side on their previous outing, Lansdowne bounced back with a seven try demolition of Garryowen in their Energia All Ireland Division 1A clash last Saturday.

The visitors were coming off the back of a win in their Limerick Derby against Young Munster but, shorn of their representative players, they offered little serious threat to a Lansdowne squad still smarting from last weekend’s reverse.

Such are the vagaries of the AIL; without their representative players UCD themselves were thumped by a Terenure side which grows stronger by the week, it seems. All in all, and despite the fluctuations caused by player availability patterns, the League is building towards a great climax, with several sides in contention for the play-offs and all capable of beating the best sides on their day.

The swirling Aviva back pitch wind made its first appearance in a while, and the visitors had the advantage of the elements during the first period.

This didn’t stop Lansdowne from opening with a bang as the ball was taken up the middle from the kick-off to the Garryowen 5 metre line. After a few pick and drives second row Dan Murphy plunged over for the opening try, his first in the League, with scarcely a minute registered on the clock.

Out half Peter Hastie converted and the Headquarters side were up and away at 7-0.

Lansdowne returned to the attack immediately as their burlier opponents struggled to come to terms with the pace of the home game. Winger James Reynolds made good ground down the left in an attack which was repulsed before another great break, again down the left, saw Paul Kiernan (twice), centre Andy Marks (what a wonderful player he is turning out to be) and Reynolds again combine to carve open the Garryowen defence for a great score wide out by the winger.

The try wasn’t converted but Lansdowne had established a 12-0 lead within the first 8 minutes of the contest and were well set up to counter the repost which inevitably came from the Limerick men.

A period of sustained pressure ensued as Garryowen enjoyed their best period on the match. Their efforts were frustrated by a brilliant turnover by Club Captain Jack O’Sullivan, who seemed to be everywhere. He was ably supported by his comrades, Clive Ross and No. 8 Mark Boyle in what is arguably the best back row combination in the League.

The visitors eventually breached the solid Lansdowne defence with a try which looked rather easy from Bryan Fitzgerald. The centre was put through a big gap in the 22nd minute in what was a very rare lapse by the home defence.

Lansdowne were stung into retaliation, and a penalty from Hastie, enjoying a good day with the boot, saw his side’s lead extended to 15-5 after 36 minutes.

Lansdowne weren’t done yet in the first half, and moments later a lovely off-load by the irrepressible Hastie to Reynolds saw the winger chip through. The ball was retained, and this time the out half chipped through for centre Andy Marks to gather and cross wide out for his side’s third try.

20-5 up on the restart, Lansdowne moved up a gear and almost broke through again on the restart; a great cross-field kick found speedy Sean Galvin who took the ball on the full. The winger found Marks in support, only for his inside pass to elude the onrushing O’Sullivan for what would have been a try of the season contender.

Lansdowne were not to be denied, however, and the increasingly influential Marks weaved his way through from the ’22 for a great individual bonus-point try in the corner. Hastie put over a great conversion from wide out and the home side were home and hosed at 27-5 after only 49 minute’s play.

Moments later, Lansdowne confirmed their superiority with the try of the match – again, it was initiated by Hastie, who made a great break to find Galvin on the left in support.

The winger outpaced the defence and drew the last defender with an inside pass to supporting scrum half James Kenny who scored under the posts. With the convert by Hastie, the home side’s lead had stretched out to 34-5 after 52 minutes.

The game continued to ebb and flow with both teams enjoying chances but unable to capitalise on them. That was until the 65th minute, when 19 year old replacement full back Sam Prendergast, who had come on to make his AIL debut, fielded a kick on his own ’22 and set off. He proceeded to interchange several passes (one or two suspiciously forward) with Hastie, who broke yet again down the left to cross under the posts for Lansdowne’s sixth try which he converted himself. 41-5.

Young Prendergast also has a massive boot and impressed with his overall game. Definitely one to watch for the future!

There was still something in the Lansdowne tank, and Sean Galvin was rewarded for a fine overall display in the 68th minute with a try in the left corner.

A break now from the League until the 19th of February when we visit College Park seeking revenge against Trinity for the reverse we experienced before Christmas. A key match for Lansdowne as the club seeks to retain a top-two position and an all-important home berth in the semi-finals.

Before that, we take on Young Munster in the Bateman Cup Final on February 12th in Musgrave Park. It would be brilliant if our supporters could make the trip to Cork to support our team as they chase the club’s 7th Bateman title and avenge Young Munster after our defeat to them earlier in the season and, of course, in the 1928 Bateman Cup final!

Good Luck to Ireland and especially Tadgh Beirne, Ronan Kelleher and Dan Sheehan in the 6-Nations!