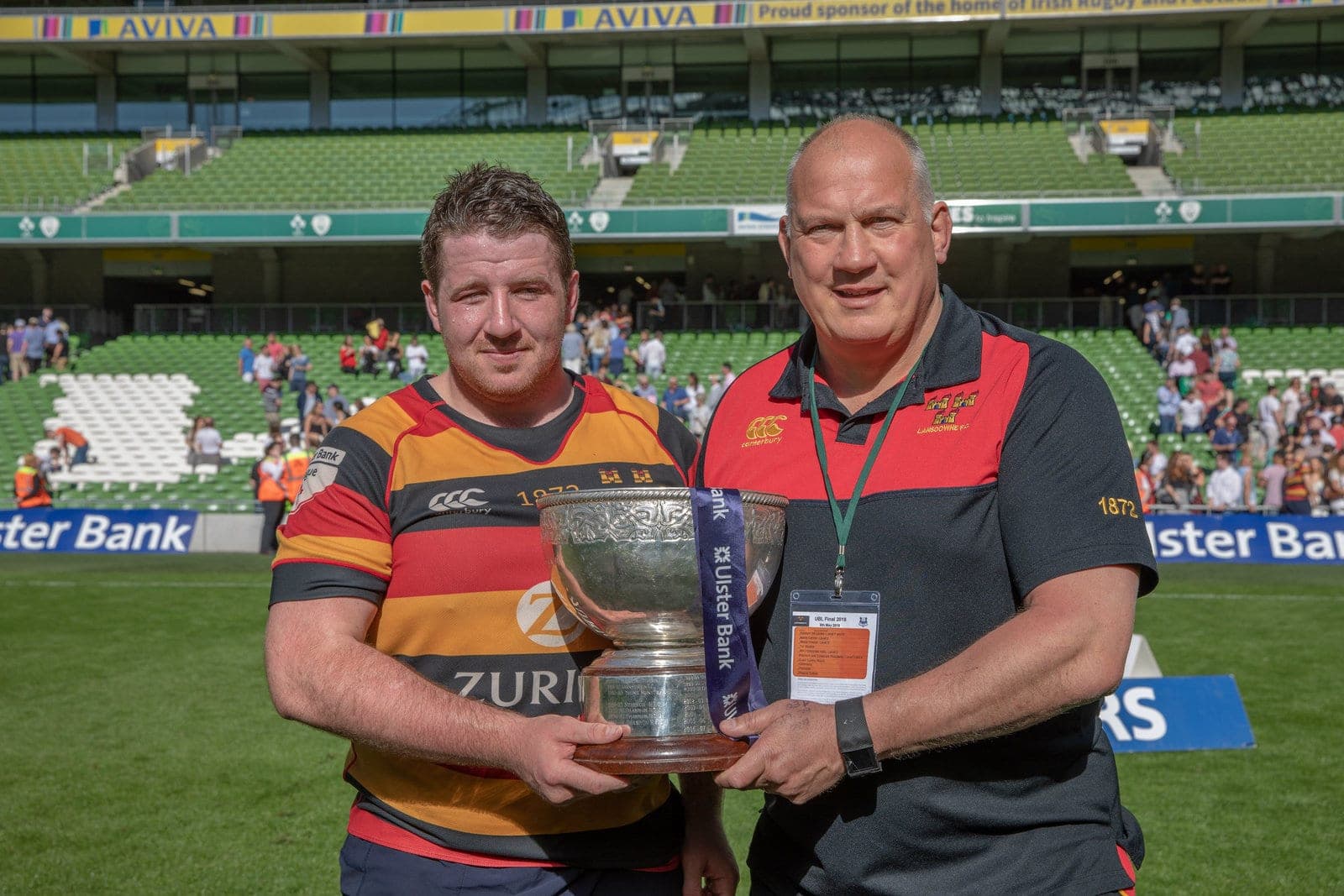 Enjoyable arguments are already taking place in cars, bars and in the club house as members of Lansdowne FC, whose 1st XV are the proud winners of both the Ulster Bank All Ireland League and Bateman All Ireland Cup titles as well as the Leinster Senior Championship, come to terms with their fantastic run of success this season.

The discussions around whether Club President Michael Cassidy, Captain Ian Prendiville and Head Coach Mike Ruddock and their teams have led Lansdowne to the best ever season in the Club’s 146-year history will continue for many months to come, and will, no doubt, provide endless pleasure for the loyal band of Club supporters who have struck to their task over many seasons.

A typical final – a nervy, tense and hard-fought contest between two very evenly matched sides when, ultimately, the final decision, as Coach Ruddock had predicted, came down to the bounce, or in this case the kick, of a ball.

And so it came to pass. On a hot, broiling day, Lansdowne Legend Scott Deasy flawlessly kicked five from five – 4 penalties and a conversion – in as sweet a contribution as you will see from the tee at any level of rugby, amateur or professional.

Scott’s season tally of 219 points (setting a new club record) may well live long in the Lansdowne records – unless he chooses to break it himself next season, of course!

His young Cork Con counterpart, Tomas Quigley, a fine player in his own right, struck 4 from 6, although his penalty-miss from his final effort in the 68th minute from 38 metres out proved to be the crucial moment in this absorbing contest.

From the outset, the contest was fierce – both sides setting out their markers with ferocious hits, Lansdowne’s open side flanker Aaron Conneely only being matched in this department by Con’s equivalent (and Lansdowne’s man of the match in the 2015 final), Joe McSwiney.

Nor were others far behind them. Lansdowne’s No. 8, veteran Willie Earle and blind-side Jack O’Sullivan put in a mountain of great work, ably supported by second rowers Jack Dwan and Josh O’Rourke, hooker Tyrone Moran and captain Ian Prendiville, but the outstanding player on the day (and RTE Man of the Match) was loose head prop Peter Dooley.

Birr’s finest, as Willie Burns would say, put in an astonishing 80 minutes. His interventions at critical moments in the match, be it in making tackles, carries and turnovers, marked his stand-out performance as one to savour.

Not only were Dooley, Moran and Prendiville significant contributors in the loose; their scrummaging saw them dominate their opponents and the two penalties they won in the last five minutes of the contest were crucial in keeping the Leesiders at bay in the closing moments.

The fact that the front row remained unchanged throughout the game in such testing conditions is a tribute to the faith Coach Ruddock places in them and to their fitness levels.

Con had begun the match marginally the better – a 2nd minute penalty saw Quinlan establish an early lead which the visitors were to retain until first half injury time. Lansdowne defended really well throughout the half and they needed to – the Con pack was forceful and second rowers Brian Hayes and Conor Kindregan and number 8 Luke Cahill, in particular, gave their all in their side’s cause.

The Lansdowne scrum held sway, however, and firstly a penalty and then a strike against the head – what a rarity nowadays – disrupted the Con momentum and brought valuable relief to the Lansdowne side.

Territorial pressure brought penalties, however, and Quinlan was able to push his side out to a 9-3 lead after 24 minutes, Deasy having leveled matters at 3 a-piece in the 13th minute.

Slowly, though, Lansdowne were coming to terms with their savvy and determined opponents – the Corkmen were not going to give up their title without a struggle.

Blind side Jack O’Sullivan reclaimed the restart from Quinlan’s third penalty with a great take and the Headquarters side surged onto the offensive through winger Adam Leavy, Earle and O’Sullivan again as the momentum of the match marginally, but significantly, shifted. Deasy knocked over the resultant penalty to narrow the margin to 3 points but, in truth, a good try-scoring chance wasn’t taken.

The unfortunate Foster Horan, who was his usual committed and industrious self on the right wing, had to retire injured just after the half hour, and was replaced by fellow- Ireland 7’s international, Ian Fitzpatrick.

Just when it appeared that Con would reach the break with a narrow lead, a high tackle by Luke Cahill on Fitzpatrick saw Deasy given a penalty chance from 38 metres out in the 3rd minute of injury time. Again, the Lansdowne out half struck the ball sweet as a nut and the sides were level at 9-all at the break.

Lansdowne entered the second period a little fortunate to be on even terms but determined to make their strength and conditioning pay against the bigger Con forwards.

The game continued to be marked by errors and mistakes on both sides, not all pressure induced. An early cut by centre Mark O’Keeffe wasn’t capitalised upon, but once again the Lansdowne scrum came up trumps with a penalty in the 46th minute which Deasy goaled immaculately from 42 metres to put his side into the lead for the first time at 12-9.

Con were having none of this, however, and they launched a series of attacks on the Lansdowne defence. For the only time in the game the home side’s defensive concentration appeared to lapse, and Brian Hayes used all of his considerable frame to stretch for the line in the 50th minute and restore the Leesider’s lead at 14-12.

Quinlan was narrowly wide with the conversion attempt from the touchline but added a penalty for off-side in the 58th minute to press his side into a 17-12 lead.

It was squeaky bum time for the home team, but there was no element of panic in the Lansdowne ranks. Then, approaching the hour, captain Ian Prendiville latched onto an overthrow at the back of the lineout and surged forward.

He was supported out wide by full back Eamonn Mills and centre Harry Brennan, who made ground, before a series of powerful pick and goes led by Moran and Dooley saw the former twist and turn and, showing enormous strength, plunge over for a great team try.

Once again, Scott Deasy nervelessly knocked over the convert in the 61st minute to nudge his side into a 2-point lead at 19-17.

Surprisingly, this was to be the last score of the match, although several chances subsequently arose; Quinlan’s missed penalty in the 68th minute proving the decisive moment. The penalty had been awarded against Tyrone Moran for an alleged deliberate knock on. It was quite evident for the replay that the ball went forward in the tackle, so justice was, in effect, served.

Lansdowne’s key two scrum penalties frustrated Con in their attempts to set up a late scoring opportunity and they were bolstered further by a smashing rip by loose head Peter Dooley as he took the ball off his opposing tight head, Ger Sweeney. In particular, this epitomised the growing ascendancy of this great young team as they proceeded to march into Lansdowne – and Irish – club rugby history by winning their third All Ireland League title in five seasons.

There’ll be a great opportunity to congratulate the Lansdowne squad next Thursday (TBC), as they seek to round off their wonderful season with a win in the Leinster Senior Cup final against Terenure (Donnybrook).

It would be fitting if you were there to salute this extraordinary, record-breaking Lansdowne squad at the end of what is a momentous season in the Club’s long and proud history. 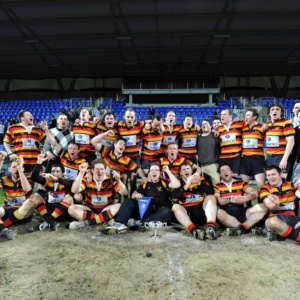 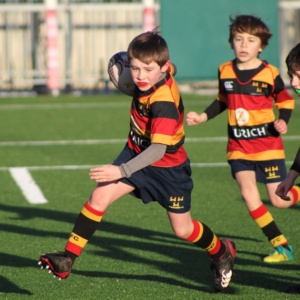 Date for Return to Minis Training

🗣 “Leinster are possibly the best team in Europe at the moment with great history and a big European pedigree, so it’s very exciting."

A side he knows very well, Jono Gibbes is relishing @staderochelais' semi-final clash with @leinsterrugby 🤩

Warren Gatland has warned he could axe England stars from the Lions tour to South Africa after Premiership Rugby threatened to block the release of players for a training camp | @danscho1 https://t.co/xAChm4EMUE

🗣 “Leinster are possibly the best team in Europe at the moment with great history and a big European pedigree, so it’s very exciting."

A side he knows very well, Jono Gibbes is relishing @staderochelais' semi-final clash with @leinsterrugby 🤩

Warren Gatland has warned he could axe England stars from the Lions tour to South Africa after Premiership Rugby threatened to block the release of players for a training camp | @danscho1 https://t.co/xAChm4EMUE