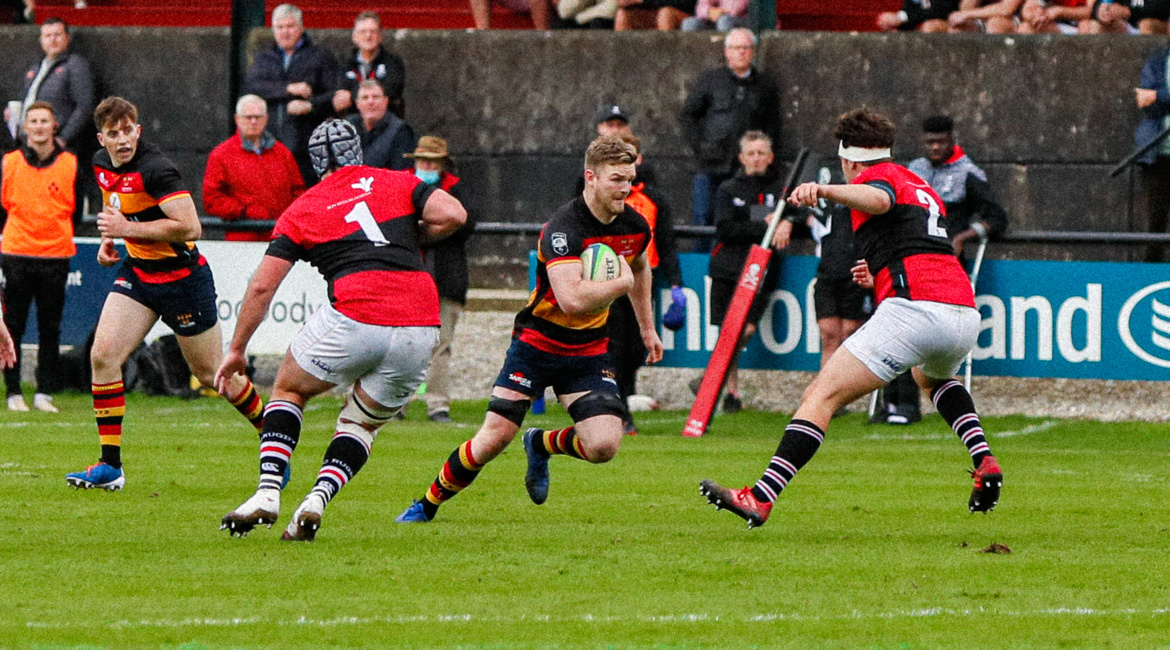 Lansdowne recorded their third win in a row in the latest round of the Energia- sponsored All Ireland League with a comfortable win against a young UCC side at the picturesque Mardyke grounds in Cork on Saturday.

Winger Michael Silvester finally got to make his AIL debut for the club, having had to withdraw from last weekend’s fixture against Terenure following an injury sustained during the warm-up.

Silvester, a full Leinster cap, marked his debut with two well-taken tries in the second half and could well have made that three, if a scoring chance hadn’t gone astray during the first period.

Lansdowne sported two changes in the front row from last week’s win in Terenure, with Frank Kavanagh coming in a loose head prop and Jamie Kavanagh starting as hooker with Luke Thompson on the bench.

The match was a slow burner; Lansdowne won a penalty in the first scrum in the second minute and set up an attacking line-out in the College ’22, only for the throw to be lost. This set the pattern for the early part of the first half, with four of the first seven line-outs awarded to the visitors going astray as the line-out misfired.

The line out deficiencies were gradually sorted out to the extent that, after that faltering start, the last 10 throws of the game all hit their man and the quality and consistency of the visitor’s attacking ball increased considerably as a result.

Having been called back for a forward pass early on, Lansdowne had little to show for their early control and territorial dominance. Astute kicking by the UCC half backs, Luke Kerr at scrum half and Billy Kiernan, cousin of our Paul, helped keep the visitor’s attacking play at bay, with winger Sean Galvin hauled down just short of the line and a lovely break by Paul Kiernan just failing to yield a deserved try.

It wasn’t until the 22nd minute that a surge by winger Silvester almost saw him make the line; the ball was then recycled infield through several pick-and-go attempts before tight head prop Conan Dunne crashed over beside the home posts for the opening try following a neat juggle to hold on to possession.

Out half Charlie Tector added the conversion from an easy angle and the Headquarters side were on their way at 7-0.

The game was being played at a high tempo, as both sides sought to move the ball at every chance. This inevitably led to numerous turnovers with one particular ripped ball by full back Eamonn Mills on a startled UCC forward standing out.

Lansdowne lost influential No. 8 Mark Boyle to a shoulder injury and he was replaced after 30 minutes on the flank by hooker Luke Thompson, who looked entirely comfortable in the position.

UCC enjoyed a period of sustained pressure in the Lansdowne ’22 but conceded a goal-line ’22 to allow Lansdowne to clear their lines. This eventually led to a penalty to the Leesiders on 36 minutes which centre Daniel Squires duly dispatched from 41 metres to reduce the margin to 7-3.

Lansdowne responded immediately and the Students conceded two penalties in a row, the first went into touch, from where the ball was mauled to the home 5-metre line; the second was tapped and a series of recycles eventually led to lively scrum half Cormac Foley  crossing for the second try, again goaled by Tector on 41 minutes to give his side a 14-3 advantage on half time.

In truth, Lansdowne were a little flattered to be ahead by 11 points at the break, but they unquestionably began to assert their dominance after the restart. While they weren’t exactly tearing up trees, nonetheless the pack was putting in an efficient shift and the returns began to show as the performance up front stepped up a gear.

Another excellent break by centre Paul Kiernan almost led to a try on 48 minutes. The ball was recycled, however, and replacement prop Adam Boland was on hand to twist and dive over beside the posts for a good try, again converted by out half Tector.

Captain Jack O’Sullivan and Clive Ross were once again in the van of almost every good Lansdowne forward effort, aided ably by hooker Jamie Kavanagh and second row Jack Dwan, in particular.

Lansdowne’s platform was now much more stable, and solid and well-organised defence meant that UCC were making little headway when in possession. Matt Healy came on for Joey Szpra in the row and his bulk lent some ballast in the tight.

Following a hold-up over the UCC line, replacement James Kenny made a great break down the left from the resultant goal line drop out before passing to winger Sylvester who crossed to ground the ball for the all-important bonus point try after 62 minutes.

While Tector wasn’t able to oblige with the extras, Lansdowne were now well ahead at 26-3.

They were soon even further ahead when, having run a penalty, Silvester again displayed his pace and footballing skills to follow up on a well-placed kick through, gathering to score his second try and Lansdowne’s fifth of the afternoon.

At 31 points to 3 ahead, Lansdowne can be forgiven a little for taking their foot off the throttle, so to speak, and allowing the game home side to score two tries in the last seven minutes through full back George Coomber and useful No. 8 Alex Kendellen to reduce the final margin to a score line of Lansdowne 31 points, UCC 15.

Already there are four sides 5 points clear of the rest at this stage of the embryonic AIL League table, with Lansdowne in second place. Following a break for the action next weekend, Saturday the 30yh of October will see a rigorous examination of Lansdowne’s credentials with the visit of a resurgent Young Munster team to Headquarters, where the match will be on the main pitch.

Let’s hope you will all be able to make it to Lansdowne Road next Saturday week to support your team as they seek to build on an excellent start to their Energia Ireland-sponsored AIL campaign!