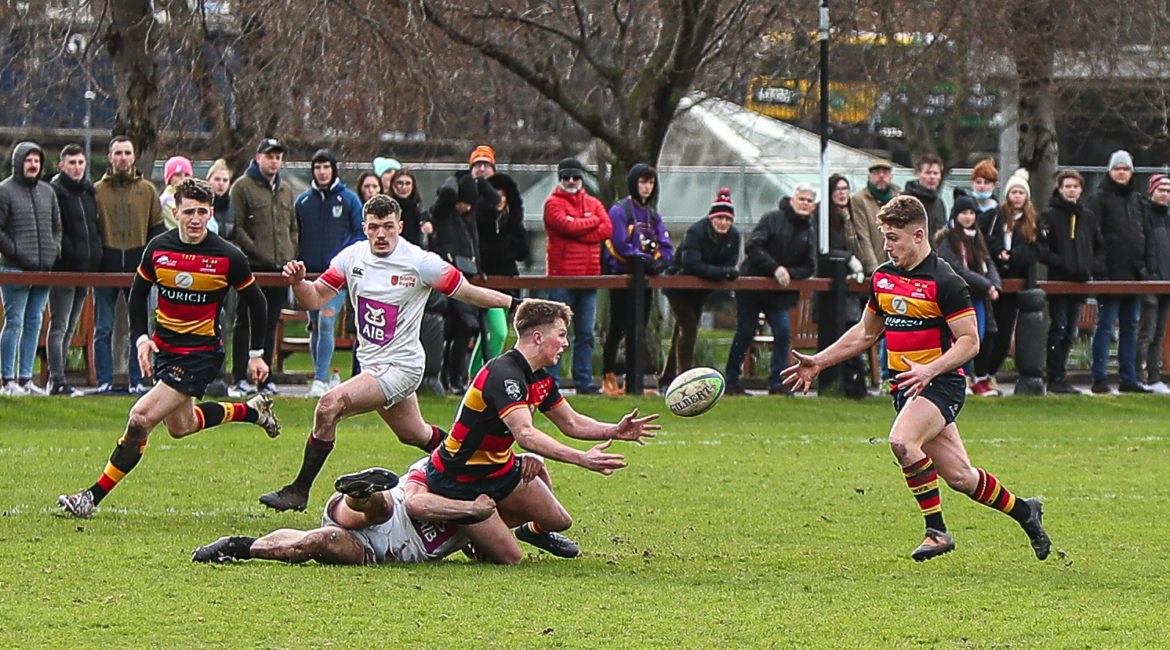 Three months to the day since Trinity sprung what was then considered a surprise win in the corresponding fixture at the Aviva Stadium, Lansdowne duly exacted revenge with a narrow victory last Saturday in College Park.

We even had the same referee! Once again this was a tensely fought and close encounter, with two well-organised and disciplined defences mostly on top.

Lansdowne showed only a few changes following on from their thrilling Bateman Cup final win against Young Munster last weekend. One of those was in the front row, where emerging prop forward, Ben Popplewell – still Under 20 – showed his versatility as he switched from loose head to tight.

Many eyes were on the young Wexford man, and he acquitted himself admirably. Indeed, the Lansdowne scrum, which had suffered at the hands of the Trinity tight five in the first encounter between the sides, coped well with the bigger Student pack and won several penalties for their side.

Played in a blustery wind on a pitch which saw a lot of overnight rain, Lansdowne availed of the elements in the first half, attacking towards the Westland Row end.

Their lively start was rewarded with a penalty on the home ’22 before a minute’s play had passed. This was confidently struck between the posts by their out half, Peter Hastie, who had definitely brought his kicking boots with him on the day.

The Students responded immediately, and the concession of two quick penalties in a row saw them set up camp in the visitor’s ’22. Following a series of line-out pick and drives, hooker Mark Nicholson inched his way over the Lansdowne line for the opening try of the game in the 16th minute.

The try was converted by out half Aran Egan, a Glenstal Abbey product, and Trinity had their noses in front 7-3.

Lansdowne used the elements from the restart to kick long into the Trinity ’22, and a clearing kick found its way to right winger Sean Galvin. The diminutive speedster took off on a blistering run through the home defence that was only halted deep inside the Students’ defence.

The ball was quickly recycled and spun right for veteran back row Clive Ross to sail over for a well-worked try after 18 minutes play. The sure-footed Hastie added the extras and Lansdowne were 10-7 ahead.

Trinity Captain Mick O’Kennedy, returning after injury, came on for winger Rob Russell at 10, with Egan moving to the right wing. O’Kennedy caught the eye on several occasions and is a player to watch for the future.

Lansdowne went on the attack again, and a great move down the left was frustrated by a kick through which went too far and over the line. The visitors were rewarded with a penalty on the restart, however, wide out on the left. Hastie again lined it up perfectly across the breeze to establish a 13-7 lead for his side with 26 minutes played.

Lansdowne then had to show their outstanding defensive qualities – a hallmark of their play this season – in defending their lead until half time against a series of attacks which saw the Students pounding their line. A brilliant turn-over in defence saw the pressure relieved and the ball cleared to their 10-meter line.

The Headquarters side continued to repel all boarders and reached the break with a 13-7 lead, but with the elements to face in the second half.

Trinity started the second half where they left off and won a series of penalties which enabled them to lunch a succession of attacks against an unyielding Lansdowne rear guard. Their only reward was a penalty from 25 metres out on the left which was despatched by Egan to narrow the gap to 13-10 in the 54th minute.

Slowly the tide began to turn and the quality of Lansdowne’s possession started to improve. Lansdowne’s engine-room pairing of Under 20 Ruairi Clarke and the improving Dan Murphy – a good, “old style” second row – were showing well. Talented winger Michael Silvester made a good cut but unfortunately got injured in the process as the soft underfoot conditions began to affect two tiring sets of players.

Having already demonstrated an effective rolling maul off a line-out only moments before, Lansdowne then made the key play of the match in the 69th minute.

An excellent throw by Luke Thompson 10 metres out from the Trinity line was re-gathered by the hooker at the base of the resulting maul, which surged towards the Trinity line. An exultant Thompson duly grounded the ball over the line for a great pack try.

Once again Hastie was up to the mark from wide out as he made it four from four from the kicking tee in difficult conditions.

This put some open water between the sides for the first time, although there was still ample time for a recovery. Scrum half Cormac Foley made a great covering tackle in the 72nd minute, forcing an error which won a relieving scrum for his side.

Lansdowne lost centre Andy Marks and ended up with replacement back row Michael O’Brien playing on the wing. Trinity took advantage and a high, looping pass to Egan on the wing saw the out half/winger cross for an unconverted try wide out in the 83rd minute to narrow the gap to 20-15.

There was still time for the restart, with Lansdowne nerves jangling a little. There was no further threat from the home side, however, and the Headquarters Club had eked out a good, if narrow, win against a gallant Trinity side.

Next up is a mouth-watering top-of -the-table clash as we welcome Clontarf to the Aviva back pitch this Friday for a clash under lights. Kick-off is at 7:30pm, so make sure you’re there to support this gallant Lansdowne side as they seek to secure a home semi-final in the Energia-sponsored AIL Division 1 play-offs!