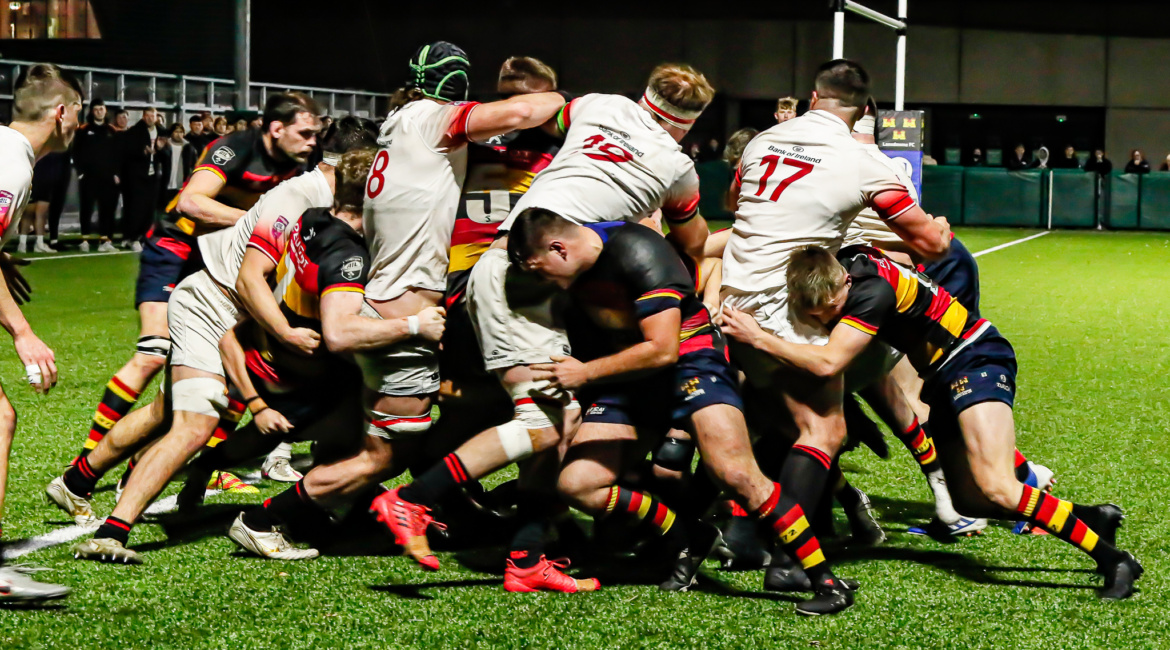 What a cracker of a match! Played in perfect conditions on the Aviva Stadium back pitch, both sides served up a display of rugby fit to grace any field in what was a tremendous show-piece for the Energia-sponsored AIL, culminating in a nail-biting finale which drove both sets of supporters from despair to ecstasy and back in a matter of seconds.

They simply don’t get much better or exciting than this. A big crowd was entertained by two teams who played enterprising and attacking rugby throughout. Lansdowne, with a smaller pack – a measure of how the age profile of club sides has shifted over the years – were lively and committed in defence, while Trinity always looked dangerous in attack.

Ultimately, however, the home side’s sterling efforts were undermined by a failure to take their place-kicking chances – a return of two from six by the three kickers used summed up their lack of success from the tee.

For their part, Trinity out half Aran Egan returned five from five and kept his cool admirably to land a penalty in the ninth minute of stoppage time and snatch a victory which, on balance, his side merited over the full match.

Having said that, it was a measure of Lansdowne’s grit and determination that saw them claw their way back into a game and almost snatch a victory that had looked to be beyond them for much of the proceedings.

Trailing from an early try through flanker Alan Francis, converted by out-half Egan, home out half Peter Hastie kicked an 8th minute penalty to open Lansdowne’ s account. Disaster befell in the 20th minute when, following a promising period of pressure on the student’s defence, winger Ronan Quinn intercepted in his own ’22.

Quinn was quickly closed down, only to kick ahead. It appeared the Lansdowne cover had the situation under control only for the bounce to evade them and fall back into Quinn’s hands. Clearly willing to accept the gift, he drew the last defender and sent supporting scrum half Louis O’Reilly over beside the posts.

14-3 down after 26 minutes, Lansdowne didn’t panic, and began to up the tempo. The home scrum, with Under 20’s tight head JJ Hession impressive, won two early penalties against their heavier opponents.

A measure of Lansdowne’s inexperience in this area was reflected in the presence of another Under 20 prop, Oisin Michel, as cover on the bench. Both these young men acquitted themselves admirably and look to have great futures ahead of them.

With Trinity creaking under the pressure and conceding penalties, they were forced back into their ’22 by a series of probing home side attacks off a very secure line-out base. After several forward thrusts, the ball was moved left and Hastie, showing a fleet turn of foot, pierced the defence for a neat try.

The conversion was missed, but there was still time for more before the break. Following another penalty line out in the DU ’22, several pick and goes eventually saw returning No. 8 Mark Boyle – still only 20 – plunge over for another unconverted try.

13-14 down, the home supporters hoped for even better things during the second period. Their hopes were quickly dashed, however, as once again the Students were quickest out of the traps, second row Jamie Beresford scoring an early try which was again goaled by Egan.

With centre Cory Reid rather harshly yellow-carded for a deliberate knock-on – he body- tackled a player and the ball came off his hand – things were not looking good for the home side. But with the back row of O’Sullivan, Ross and Boyle playing out of their skins, Lansdowne held out and, on restoration to full numbers, struck with a well-worked try on the right by replacement full back Eamonn Mills, making a welcome return after injury.

Unfortunately, the relatively straight-forward conversion was missed by replacement out half David Moran, full back Stephen Madigan also falling short with a longer-range penalty beforehand. Still, at 18-21 down there was still a lot to play for.

Trinity extended their lead with another Egan penalty in the 69th minute after Lansdowne failed to clear their lines on the restart. The Headquarters side then gambled with a 5-metre line out from a penalty in front of the DU posts in the 74th minute but for once on the night the otherwise excellent line-out didn’t function.

Lansdowne continued to take the game to the Students and the atmosphere was simply electric as the tension mounted. A series of penalties saw the pressure grow on the Trinity defence with a series of Lansdowne pick and goes launched at an increasingly desperate rearguard.

On 84 minutes the university side’s defence was finally breached as burly replacement hooker James Kavanagh plunged over the line close to the posts to reduce the gap to a solitary point, 23-24. Moran lined up the kick and coolly planted the ball between the sticks to the delight of the home support and the despair of the Trinity visitors, who could scarcely believe what had happened.

There was still time for the restart and Lansdowne were awarded a scrum just inside their own 10 metre line. The scrum didn’t settle and finally the referee blew his whistle – penalty to Trinity!

Many Lansdowne people commented that Trinity were pushing before the ball came in, and a free kick should have been awarded to Lansdowne. Be as it may, there was almost a sense of inevitability as Egan lined up his kick and slotted it calmly between the uprights to snatch victory back for his side. A truly memorable dénouement to a wonderful contest which epitomised all that is best in Irish club rugby.

Due to results elsewhere on Saturday, ironically Lansdowne’s two points – a try bonus point and a losing bonus point – actually moved the club up to second in the League table. A trip to Limerick and Garryowen awaits this coming Saturday as things don’t get any easier in the battle for League honours!