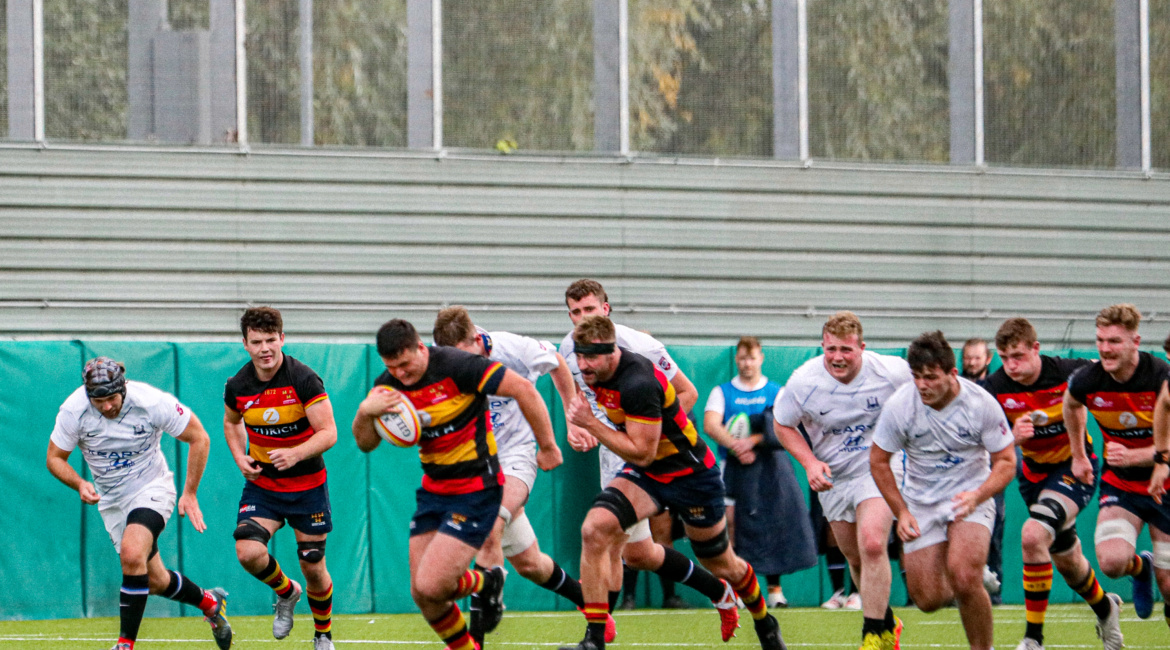 Following a directive from the IRFU on the 12th of March 2020, all rugby activity on the island of Ireland was suspended until the 29th of March.

Little did we realise at the time that this was only the tip of the iceberg, as the mounting Covid-19 pandemic swept through the world, killing millions, destroying lives and changing our world, perhaps for ever. Rugby was only one of the many sporting victims, and the rest of the 2019~20 season was abandoned as well as the entire 2020~2021 AIL campaign.

Putting things into perspective, missing our sport seems a small contribution to have made in the ongoing battle, now approaching its second anniversary, against the deadly virus.

Humanity is both resilient and adaptive, however, and as part of the loosening of social restrictions last Saturday we were delighted to welcome back action in the All-Ireland League after an 18-month absence. Fittingly, it was reigning Champions Cork Constitution, unbeaten in their last 18 AIL matches, who visited the Aviva in our first match of the new League campaign.

A minute’s silence was held before the game in memory of the late, great Paul Inglis, a former Club Captain and President, who passed away recently.

And what a game it was! In his speech at the pre-match lunch, Con President Donal Lenihan confessed that he always approached away matches against Lansdowne with some trepidation. Any concerns he may have felt were no doubt assuaged somewhat by the sensational start his side made to the match – a well-worked try after only 90 seconds.

Con spun an early ball wide and winger JJ O’Neill made an incisive break down the right before passing infield to supporting scrum half, former Munster player Duncan Williams (cousin of our own Rory), to cross for an opener before many of the spectators had taken their places.

Captain and out-half Aidan Moynihan was unable to add the conversion, but the visitors had caught their hosts cold and first blood went to them with a 0-5 lead.

The match was played  at a high tempo, with both sides willing to give the ball air. This resulted in a high number of turn-overs as the play swung from end to end, with Con’s size advantage counterpoised with Lansdowne’s mobility and fierce commitment in the tackle, rucks and mauls.

The home pack were better in the loose and, ultimately, this was a telling factor in the outcome, a penalty count in the home side’s favour of 14-7 enabling them to dictate much of the game territorially.

The first of Lansdowne’s penalty awards was goaled by Peter Hastie in the eight minute to reduce the margin to two points. The young out half then took advantage of the new law affording the throw-in to the attacking side where a kick from inside the player’s own half bounces into touch in the opponent’s ’22 with a well-placed punt, but the attacking line-out was lost. This was one of several chances Lansdowne spurned out of touch although the position did improve as the game went on.

Con were penalised for hands in the ruck on 18 minutes and once again Hastie was accurate from in front and the Headquarters side had their noses in front, 6-5.

Lansdowne rather surprisingly declined a chance to kick a third penalty from in front of the posts on 25 minutes, and the subsequent line-out on the 5-metre line was again lost as the big Con pack made life difficult in this phase for their opponents.

Moynihan took advantage of a rare slip in Lansdowne’s discipline to nudge his side in front again with a penalty in the 35th minute with a 6-8 score line, and that was the score at half-time, a long-range effort from sub-winger Stephen Madigan having drifted just wide before the break.

The home side were awarded a scrum penalty on the restart, but the decision was reversed which enabled Moynihan to stretch the Cork men’s lead out to 5 points, 6-11 in the 44th minute. This, however, turned out to be Con’s last score of the match.

Greg McGrath, back from Connacht duties, came on at tight head and made an immediate impact in the tight. Slowly, the Lansdowne forwards began to assert themselves, well-led by captain Jack O’Sullivan, and fellow-back-rowers Clive Ross (Man of the Match) and No. 8, Mark Boyle.

They were ably supported by a mobile front row of loose head, Gorey-man Frank Kavanagh, hooker Luke Thompson and, before his replacement, Conan Dunne at tight head. Jack Dwan put in a sterling performance and sub Joey Szpara made an impact, too.

Lansdowne continued to have the edge and dominated territorially as the second half progressed. The perfect playing conditions – a slight breeze from the City end – enabled both sides to run the ball at every opportunity in what was a see-saw affair with turn-overs and counter-attacks, all of which made for some great entertainment.

The pressure began to tell on the visitors, and their second row, Eoin Quilter, was yellow-carded on 58 minutes. Lansdowne immediately turned the screw with No.8 Mark Boyle scoring off the back of an advancing scrum to level affairs at 11-all. The kick was missed, but the prospect of a grand finale now loomed.

Lansdowne continued their ferocious onslaught on a wilting Con pack, and their tackling in pursuit was ferocious and totally committed, constantly disrupting and pressurising their opponents.

Something had to give, and fittingly it came from a piece of great play rather than an error.

Con kicked out of defence to the Lansdowne 10-meter line where the ball was gathered on the full by full back Eamonn Mills. Mills took the ball up to the defensive line, chipped over it and regathered the ball. He made ground up to the ’22, where he sent a lovely ball inside to the supporting Jack Dwan.

The second row was tackled, but the ball was made available quickly and eventually spun right to centre Paul Kiernan inside the ‘22. Kiernan checked the covering defence and scythed through for a classic try which sent the home support into raptures on 79 minutes.

The referee, Nigel Correll, who had a fine match, blew the final whistle with only 1 minute 25 seconds of injury time added, much to the joy and relief of the Lansdowne players.

A famous victory by a new-look, largely untried Lansdowne team – only three players – Mills, O’Sullivan and Dwan – had featured in the equivalent fixture in October 2019 (Con had retained 8 players) – had stepped up to the plate in a performance that would have made that great warrior, Ingo, proud.

After such a great start to the campaign it doesn’t get any easier and we visit Lakelands next Saturday to take on our old D6 rivals, Terenure. Your support would be much appreciated!

Congratulations also to the Thirds, who overcame a much-fancied Old Wesley team to bring the O’Connell Cup back to the Club for the 15th time later on Saturday evening.

Man of the Match: Clive Ross