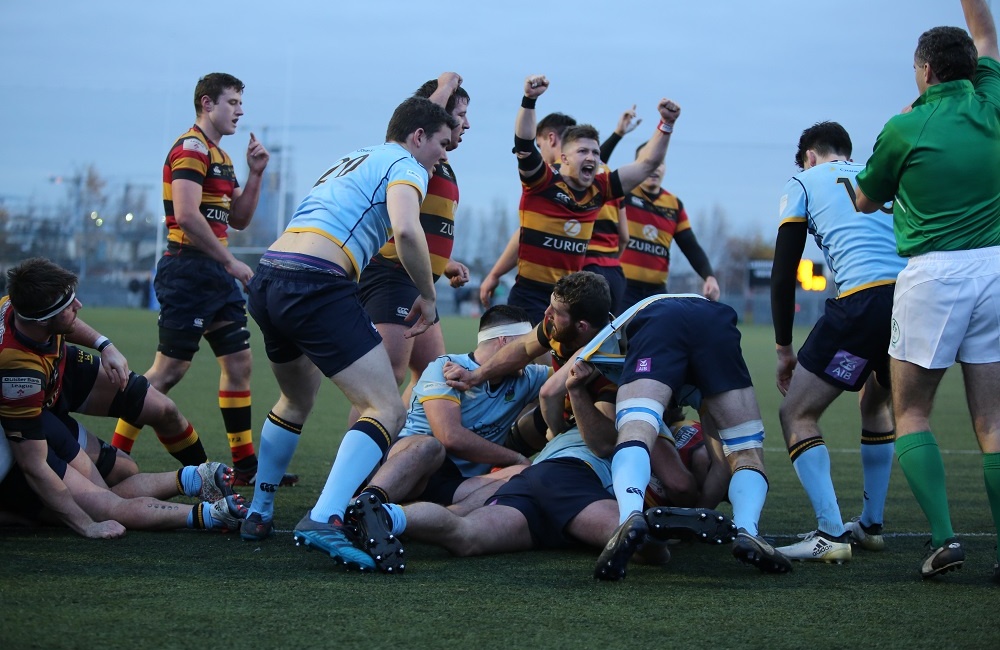 What a Christmas Cracker! Eleven tries, some great attacking rugby from both sides in a match where the attacks were definitely on top.

A festive atmosphere prevailed and Lansdowne, in particular, may be forgiven for a few lapses defensively as they extended their highly impressive unbeaten AIL win tally to 10. Entering the Christmas break, their lead is now 11 points, and they can look forward to the New Year with considerable confidence.

All of this was before them on a cold and bleak Aviva back pitch last Saturday as they faced a UCD side missing six players due to Leinster A’s match in the B & I Cup the previous evening. They did, however, regain their Ireland 7’s winger Rob Keenan (as Lansdowne did Ian Fitzpatrick), but overall they were not as strong on paper, at least, as the side that lost the previous week’s encounter in Belfield.

Lansdowne started as if they were going to blow UCD away. A first minute penalty saw them into the ’22, where, playing a penalty advantage, out half lynchpin Scott Deasy floated a glorious cross-field kick for left winger Mark O’Keeffe to gather and cross for an early lead. Deasy struck the upright with the conversion attempt.

Young UCD out half Harry Byrne cut the lead with a third minute penalty, only for Lansdowne to strike again through O’Keeffe, this time after a good line out steal by Jack O’Sullivan saw the ball worked wide; the winger showed both power and pace to accelerate through the Collidge defence for another try in the corner.

Deasy was again narrowly wide with the conversion, but Lansdowne were 10-3 ahead with the same number of minutes played, and appeared to be in control.

The visitors had other ideas, however, and they bounced back with a try after Alex Penny blocked a clearance kick and Stephen McVeigh scored. Byrne missed the kick, but his side was back in the contest at 10-8 down inside the first 15 minutes.

Lansdowne put some good attacking phases together, but the killer touch evaded them. Following a strong thrust by hooker Tyrone Moran, which lead to a penalty, they set up several attacking phases. From the last of these lively scrum half Alan Bennie crossed for a well-worked try on 24 minutes. This time Scottie found the range, and the Headquarters side were 20-8 ahead.

Again, it looked as if Lansdowne would edge away from their tenacious opponents, only for the home defence to go asleep as Stephen Murphy got Collidge’s second try following some good approach work from 2nd row Tom Treacy. The ball was then transferred to centre Stephen Murphy who was allowed to touch down under the posts without a hand being laid on him….

20-15 up after Byrne’ successful conversion, there was still time for another try in the half when, from a line-out maul, scrum half Bennie sniped down the blind, exchanged passes with O’Keeffe and scampered over for his second try of the afternoon. The try was scored in the same right-hand corner in which the first two tries were scored, and Deasy was unable to add the extras as his side went into the break with the bonus point in the bag and a 25-15 lead.

UCD emerged strongest after the break as Lansdowne appeared to be a little guilty of complacency – a dangerous thing against the Students! From a tapped penalty, they set up a series on attacking rucks and 2nd row Keelan McKenna plunged over for a try which cut the lead to 25-22 after 43 minutes once Byrne had slotted the conversion.

Attacking play continued to be the order of the day; UCD centre Murphy was joined on the naughty chair shortly after by Lansdowne flanker Jack O’Sullivan as things heated up. Lansdowne took advantage of Murphy’s absence to set up an attack which appeared to have led to a forward try, only for the referee to indicate he couldn’t see the ball grounded. The home side were not to be denied, however, and they were awarded a penalty try from the subsequent five-metre scrum.

32-22 ahead, Lansdowne were then penalised when they drove UCD off a ruck; two Collidge players came in around the side, but the referee somehow saw Lansdowne as transgressing. Not the only dodgy decision of the afternoon!

With their lead reduced to seven points, Lansdowne needed to close out the game. With subs Ronan Kelleher and Jacob Coughlan making an impact, the pack finally began to grind down the Students. Following excellent work from the ever-reliable Eamonn Mills at full back and Harry Brennan in the centre, both of whom made telling thrusts, scrum half Alan Bennie sniped over for his third try of the game. Alan thus joins a long list of Lansdowne players who have scored 3 tries in an AIL match – no one has ever scored more!

Scott Deasy nailed the convert, and at 37-25 there was finally a bit of daylight between the sides. There was still time for more, however, including a mark by inspirational captain Ian Prendiville, under 20 Tom Roche making his entry and two more tries in the last ten, helter-skelter minutes.

First UCD full back Stephen Kilgallen crossed after 75 minutes for an unconverted try (39-30) and then replacement Lansdowne prop Adam Boland had the last say when he barreled over for the 11th try of the afternoon for a ruck. Scott Deasy kicked the final points of the afternoon for a 46 points to 30 score line which drew the line under a fast, competitive game of festive rugby!

The pre-match Christmas Lunch was a full house, and was enjoyed by all. The collection in aid of the Peter McVerry Trust for Dublin’s homeless raised over €3,200, for which the Club wishes to extend its appreciation of the generosity of those who attended and donated.

Wishing you all and your Families a Happy and peaceful Christmas. Don’t forget, we start all over again on the 6th of January, when we host Clontarf in the Aviva!