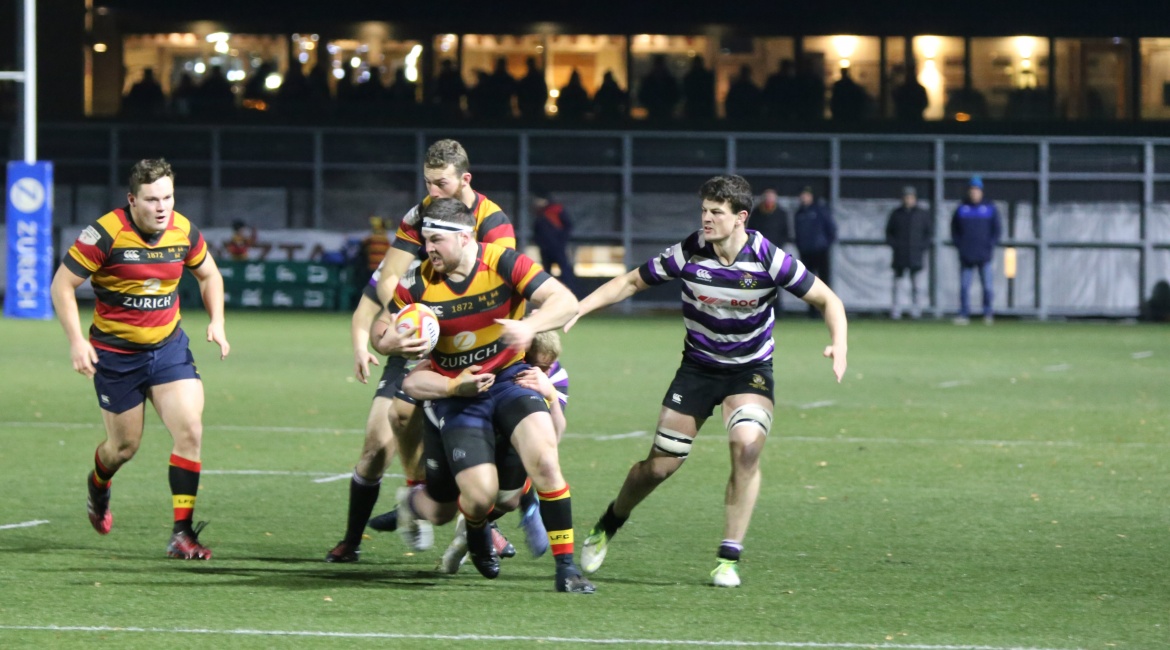 This top of the table clash between Lansdowne and a resurgent Terenure College side turned on a key moment during the third quarter when the home side, down to 13 men due to two yellow cards, scored a crucial try against the odds in the right-hand corner.

A lightening counter-attack saw lively sub scrum-half Charlie Rock squeeze a delightful grubber kick down the right-hand channel for alert winger Daniel McEvoy to gain the touch down for a vital five-pointer. This halted the Terenure momentum and gave an important breathing space to an over-stretched Lansdowne defence.

The double sin binning of Lansdowne’s props, Adam Boland and Greg McGrath, one for a scrummaging offence and the other for coming in at the side of a ruck within six minutes of each other could have proven a hammer blow for a lesser side, but the rest of the Lansdowne pack simply girded their loins and kept taking the match to the visitors, soaking up pressure and frustrating the opposition through good ball retention to run down the clock.

Both yellow cards were for technical offences, of which there were many others during the match which went unpunished. Why referee Mr. Patton chose to select two Lansdowne players for banishment in such quick succession is, and remains, a mystery to this correspondent.

First against second in the table on a chilly November night with a breeze blowing from the City end was unlikely to produce a classic. It was tough and aggressive up front, neither side prepared to yield ground, while in the backs both defences were in each other’s faces. The result was a lot of errors and turn overs as both sides struggled for dominance, with neither succeeding, particularly during the first half.

Lansdowne struck first with a penalty after eight minutes, having had a try disallowed as left- wing Adam Leavy, who was promoted from the bench when centre Fergal Cleary failed a pre-match fitness test, Mark O’Keeffe switching to centre – put a foot in touch before crossing in the corner. Leavy had an excellent match, looking sharp in possession and being involved in much of Lansdowne’s best plays.

Scott Deasy nailed the first penalty, only for Terenure’s James Thornton to level affairs after 23 minutes. Lansdowne’s scrum was yielding penalties, but was also conceding some, with confusion the winner. The home line out was working well through O’Rourke, Dowling and Butterworth, while Terenure’s impressive No. 4 Alex Thompson proved a fruitful source of possession for the visitors in this sphere of play.

The reliable Deasy restored the Headquarters side’s narrow margin with his second penalty from half way out on the ’22 in the 24 th minute, as Lansdowne locked out the half against the breeze, Eamonn Mills at full back again proving the equal of anything the opposition could throw at him in the dim – and low ceilinged – floodlighting.

Jack Dwan came on for Oisin Dowling at half time, as Lansdowne engaged their by now customary step up in gear after the restart. Alan Bennie, who had worked manfully at the base of the scrum, traded places with Charlie Rock coming on at 9. Right wing Daniel McEvoy set up a good attacking position with a strong burst out of defence which saw a series of attacks down the right. The play was then switched left and Mills split the defence to send centre Mark O’Keeffe over for a good try after 48 minute’s play.

Deasy converted for a 13-3 lead that put daylight between the sides for the first time. The referee’s two yellow card interventions were a blow which would have broken lesser teams and, indeed, the visitors took full advantage on 57 minutes when No. 8 Eoin Joyce crossed for his first of his two tries on the night. The home side stuck doggedly to their task, and the best defence3 in the League showed its mettle.

Lansdowne’s riposte to the visitor’s try was almost immediate – a snap attack down the left saw Rock’s delicate chip through pounced upon by McEvoy, who appeared to apply only the lightest of touches to the spinning ball…. 18-8. With one man still off the pitch, Terenure once again took advantage of their numerical supremacy to score a try, this time in the left- hand corner, and once more through Joyce.

Restored to 15, Lansdowne rang the changes, Willie Walsh coming on for McEvoy, who shipped a knock, and Ronan Kelleher for Tyrone Moran. The Lansdowne scrum won valuable ball and a penalty which Deasy put deep into the Terenure half. Having narrowly dropped short with a long-range effort, the Lansdowne back line general made no mistake after 74 minutes with a well-struck effort to put Lansdowne two vital scores ahead, 21-13.

There was still time for a last yellow card as Terenure left wing Sam Coughlan Murray felt the referee’s ire before the official blew for no side. As one Lansdowne wit summed up the game afterwards: “scrappy, but happy”.

Next up are back-to- back matches over the next two weeks against UCD. The second of these, on Saturday the 9 th of December, is preceded by the annual Christmas Lunch. The event is close to a sell-out, and will be marked by a special collection in aid of the Peter McVerry Trust.

Please come along, have a great day out and contribute to Dublin’s care for the homeless over the festive season in what is a most worthy cause.