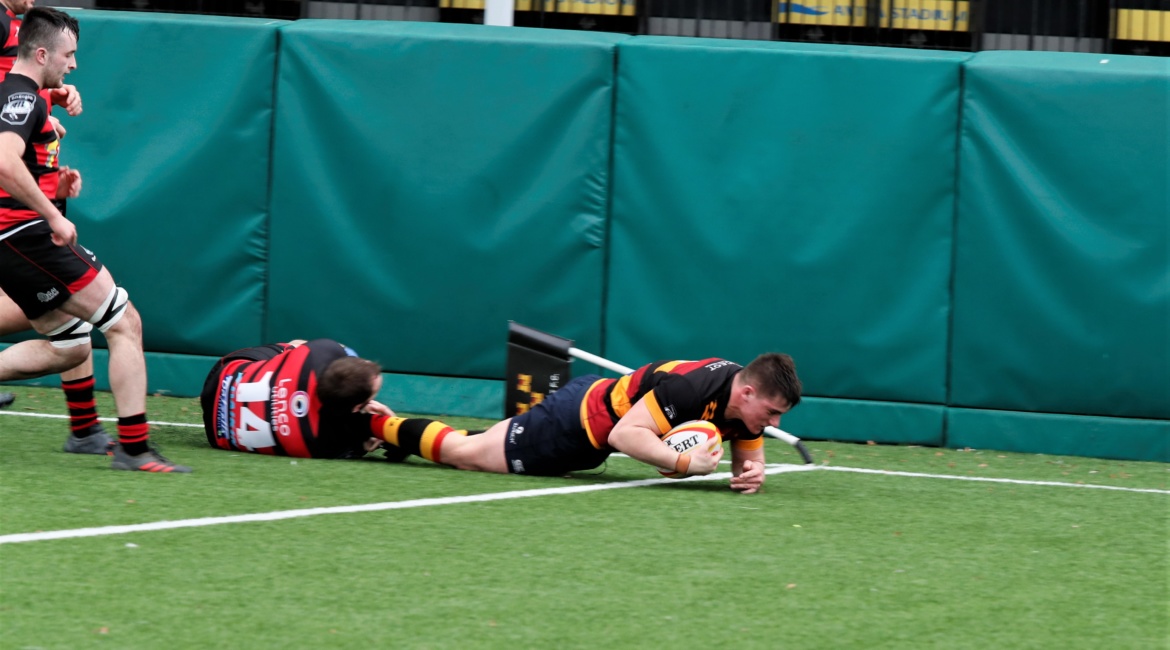 The Bateman Cup final will be a Division 1A derby between Lansdowne and Cork Con as the Headquarters side edged out City of Armagh 20-17 in an open and thrilling contest New Year’s contest, even if it did encourage the appearance of some white hairs on the head of home coach Mark McHugh, by his own admission!

Armagh were runners-up in the competition last year and came within a couple of minutes of securing a famous victory on the Aviva Stadium’s back pitch on Saturday last.

Leading 13 – 3 at half time, Lansdowne appeared to be well on their way to a comfortable victory in their quest for a place in the final; the visitors had put up a serious challenge during the first period, but the concession of 9 penalties had stifled their momentum and conceded vital field position to the home side.

Indeed, Lansdowne’s two tries during the opening stanza were both the result of penalty line-outs close to the visitors’ line. Both tries were scored by the match’s stand-out player, hooker Dan Sheehan – one mauled, the second in almost the same spot as he muscled his way over having broken from the back of a line-out maul.

The visitors had taken the lead after 13 minutes, when Lansdowne were pinged for a high tackle in front of their posts on the ’22 and out half Cormac Fox, a neat footballer, struck the ball between the posts to the delight of the numerous visiting supporters.

Lansdowne had the dominant scrum, and translated this into a penalty in the first home put-in. A line-out maul ensued deep in the Armagh ’22, but the men from the Orchard County were given a reprieve when Lansdowne were penalised in the maul close to the line.

This, in many respects, reflected the home side’s failure to translate opportunities into points – a free kick conceded in an advancing scrum; a knock-on when out half Peter Hastie made a lovely break into the Armagh ’22 in the 29th minute – enough chances were created but, when combined with tenacious defending by the visitors, saw a narrower lead at the break than might otherwise have emerged.

Lansdowne are known as a third-quarter team; instead, it was the visitors who seized the initiative after the break. Lansdowne saw off some early pressure after the resumption and won two key turn-overs in defence, but a yellow card against No. 8 Darragh Murphy and the concession of a series of penalties saw the Armagh men on the attack.

They duly took advantage, and second row JJ Skeppers capitalised on of one of those penalties following a blocked-down defensive clearance kick to tap and go from 5 metres out and crash over for a try.

With Fox converting, the lead was down to 13-10 and we had a battle on our hands. Captain Jack Dwan sought to rally his troops and he, along with flanker Jack O’Sullivan, prop Marty Mulhall and sub-prop Ian Prendiville set the example.

City of Armagh had their tails up, however, and they continued to pressurise the home defence. After 73 minutes, Lansdowne defended a line-out maul well and drove the visitors’ pack back towards the ’22, only for likely scrum half Gerard Treanor to sell a dummy and, with no pillar defence present, slipped through a gap for a try which gave his side the lead, 17-13.

Fox once again added the extras, and the home support were silenced momentarily.

Lansdowne refused to panic, however, and a vital scrum penalty was won on the 10-metre line with four minutes of regular time on the clock.

Sub out half Tim Foley set up a good line out position in the ’22 and a further penalty for collapsing the maul saw an attacking line out on the Armagh 5 metre line. Play was then worked to the right, and a cross-field kick saw possession retained as Lansdowne pummelled the home defence.

The ball was quickly spun wide through the hands of Foley, centres Barry Goulding and Conail Doherty and the restored Darragh Murphy to the rampaging Dan Sheehan, who crashed over half way out on the right for the clinching try and his own hat-trick.

Foley added the conversion and to their credit Lansdowne had regained the lead in a match which looked like it might have slipped away from them. City of Armagh had a last fling during the 6 and a half minutes added time, but the home side held on for a hard-earned victory against worthy opponents.

The Lansdowne wingers, Peter O’Sullivan and Under 20 captain Cillian Redmond played well, as did Hastie and full back Tom Roche, while Sheehan, Mulhall, Flanagan, Dwan and O’Sullivan were the pick of the forwards. For Armagh, hooker Andrew Smyth, second row McKinley, flanker Finn and No. 8 Neil Faloon were the stand-outs up front, while Traynor, Fox and full back Timothy McNiece did their team proud in the backs.

Lansdowne thus qualified for the final of this season’s Bateman Cup, which the club last won two years ago when recording a victory away to Cork Constitution in the final by a 32-12 margin. They thus lifted the trophy for the first time since 1931 and for the fifth time ever, equalling Con as the winners of the most titles.

The headquarters club will host Con in the AIL League on Saturday, March 21st before the Bateman Cup final on the 11th of April. This will be the third time these two famous clubs meet in the Cup final, both having met in the first ever final in 1922, when Lansdowne were the winners, 6-5.