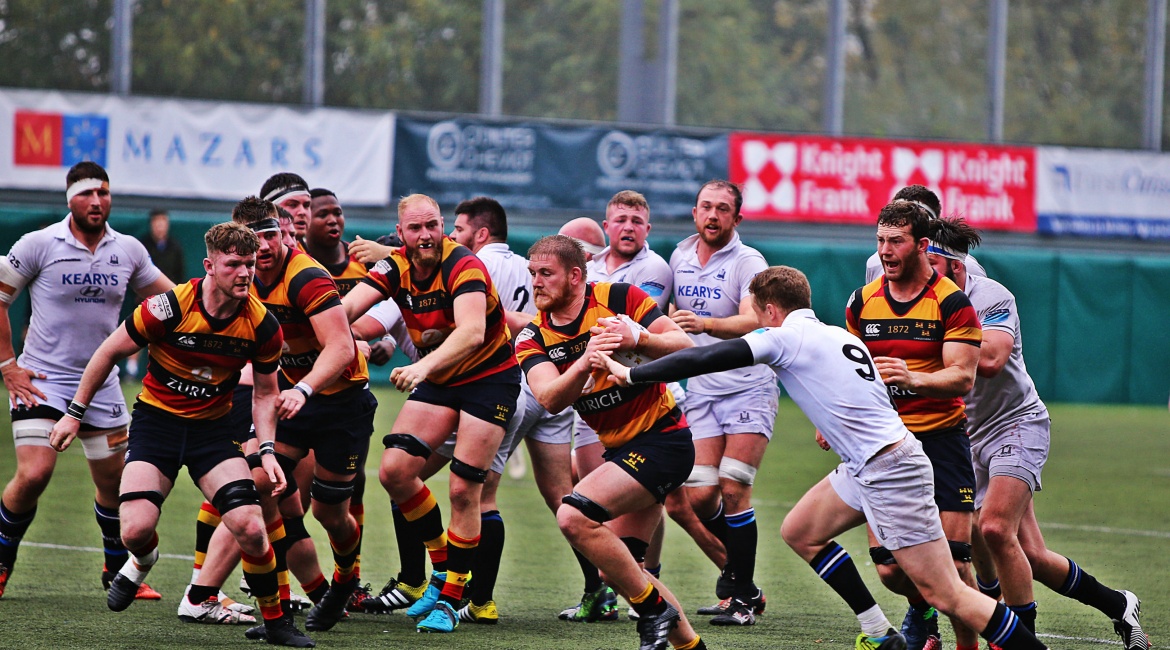 It is a compliment to Cork Con that they are the benchmark side in terms of measuring how your squad is shaping up for a cut at the Ulster Bank-sponsored All Ireland League title.

The reigning All Ireland League champions came to town with high expectations last Sunday, having defeated Lansdowne in all three encounters last season, most notably in the semi-final last April.

That Lansdowne stepped up to the plate and produced their best performance so far this season, maintaining their unbeaten four-match run in the process, is a measure of the strength of character – and ability – within the squad.

This was a victory forged in a strong tight piece platform. This saw the lineout function extremely well and the scrum even better. The line-out maul yielded great yardage, while the scrums resulted in a steady stream of penalties which put the visitors constantly on the back foot.

Coach Mike Ruddock expressed himself delighted with the performance, in particular the benefits of a huge amount of work that has been put into the lineouts. Tyrone Moran – who had a tremendous match, both in the tight and loose – hit his man virtually every time, and he was assisted by strong jumping performances by No. 6 Jack Dwan – the “Man of the Match” and 2nd row Joshua O’Rourke, in particular.

Josh has upped his game this season, and is currently in the form of his life. He was aided and abetted up front by loose head Peter Dooley – the man was immense last Sunday – and back rowers Charlie Butterworth and No. 8 Willie Earle and returning Captain Ian Prendiville.

They say that forwards win matches, and backs determine by what margin. The Lansdowne backs were given a tremendous platform from which to attack the Con defence, and they did so with a vengeance. Out half Scott Deasy – yet another player in imperious form – let the way with a 19-point haul that had his former Con clubmates wishing he was still with them.

It was Deasy who opened the scoring with a penalty in the 4th minute, the Con scrum having been forced back and their No. 8 Luke Cahill driven backwards under pressure. Con kicked a lot of early possession, but full back Eamonn Mills was a rock under the high ball, assisted early on by Foster Horan and Willie Earle on a few occasions.

Mills, indeed, was lucky to escape without injury after being taken out in the air in an incident which, incredibly, went unpunished by the match officials. This was an entirely unsatisfactory occurrence and showed a serious disregard for player safety.

Lansdowne absorbed this period of Constitution pressure, and when the visitors were penalised again in the 18th minute at the scrum Deasy stepped up to plant his second penalty from 24 meters out to give the home side a 6-0 lead.

Con were 6-0 down on the scoreboard, and had conceded 6 penalties as well by the 20th minute. However, they showed their undoubted abilities with a well-worked back move which saw pacey Ireland 7’s international Shane Daly, playing at full back, beat the Lansdowne defence on the outside and set winger Ned Hodson scooting over five meters in from the touchline.

The normally reliable Con out half, Tomas Quinlan, missed the convert, but his side were back in the contest at 6-5 with 21 minutes played.

Foster Horan was hungry for the ball on the left wing, and made good ground every time he touched it. Lansdowne were unfortunate to lose second rower Oisin Dowling, who shipped a heavy tackle when he was blind-sided in a tackle. Jack O’Sullivan came on and, to his credit, the Lansdowne engine didn’t miss a beat with him on board.

Con were feeling the heat, and open side Graeme Lawlor was sin-binned for taking a man out in the lineout after 34 minutes. Further penalties saw the home side set up base camp in the Con ’22 and launch a series of attacking drives at the visitor’s line. The ball was moved wide to the left, and centre Fergal Cleary took a great line to breach the last line of defence and cross for what was his first try for the Seniors.

The ball toppled over as Scott Deasy went to convert it, and you had the feeling this is what it would take for him to miss one. He duly made amends in injury time when he added a good penalty following great lead-in work by Horan and Tyrone Moran.

Con lost a further man to the naughty chair when their hooker, Kevin O’Byrne, was binned for persistent offences as Constitution conceded a string of penalties – the half time tally was 9-1 in Lansdowne’s favour.

14-5 up at the break and facing 13 men, Lansdowne had chances to seal out the match. They were first held up over the line, and subsequently the ball squirted out from a five metre scrum where the Con pack were in retreat. These missed opportunities almost came back to haunt them as Con, restored to full numbers, began to turn the tide.

Lansdowne’s discipline weakened, and a penalty for talking to the ref plus an extra 10 metres saw the visitors established in the Lansdowne 22. From a subsequent line-out maul, hooker O’Byrne slipped off the side to cross for a try for the visitors after 63 minutes.

Although Quinlan was again unable to add the extras, Con were now within four points at 14-10 down. Deasy managed to stretch the lead back out to 7 points in the 68th minute when he took advantage of a penalty when the Leesiders went over the top at a ruck.

This lead was stretched further when the Lansdowne backs took advantage of quick turn-over ball to attack down the left. Some swift inter-passing set Deasy away for a well-worked try on 76 minutes which the out half had little difficulty in converting for a 24-10 lead.

There was still time for some further late drama, as the referee yellow-carded Willie Earle in the 79th minute. He was joined in the early showers in the 7th minute by Daniel McEvoy for an innocuous tackle that was judged to be high. It was too little, too late for the visitors, however, as Lansdowne ran out worthy winners in a highly entertaining match.

A break now until we visit St. Mary’s on the October bank holiday Friday for a night time match under lights. Let’s hope to see you there to cheer on this fine young Lansdowne side!

This Second Home League Match was kindly sponsored by KieranFarrell