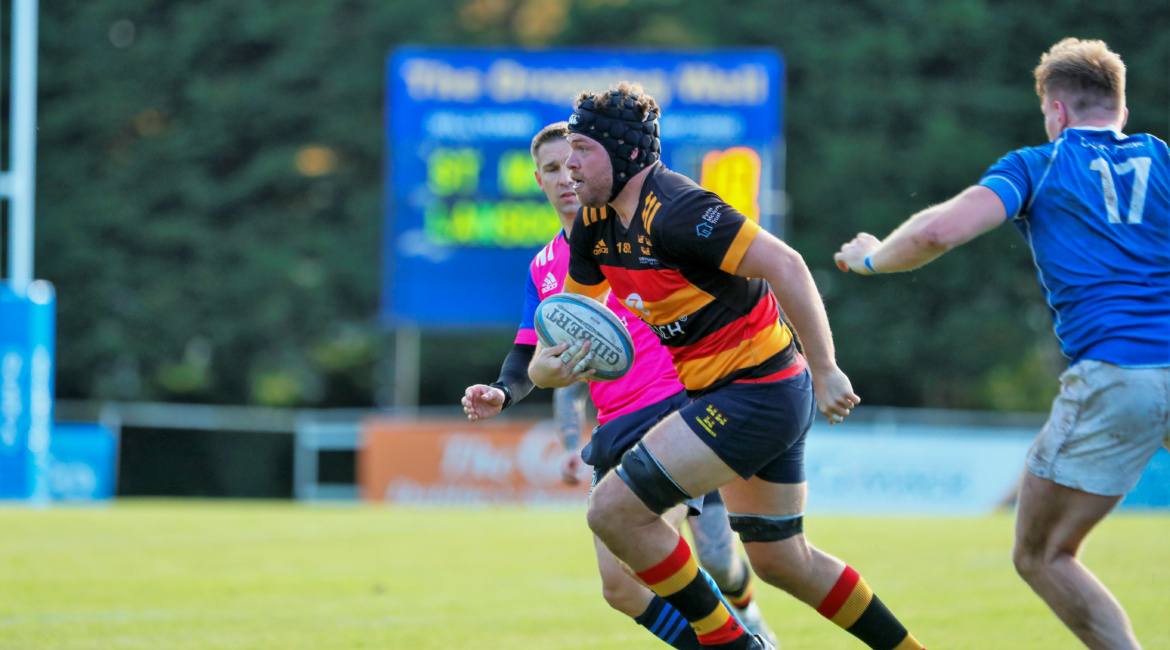 Lansdowne duly picked up their second Energia Community Series League win in Templeville Road on Saturday last, but not before having to resist a stern challenge from a combative St. Mary’s side who tackled ferociously throughout this high-tempo match.

On a breezy day, Lansdowne had the edge in the tight and their ability to eke out penalties at key moments ultimately proved crucial to the outcome. A fantastic lineout performance and a solid scrum laid the platform, although it must be conceded the home side had the edge in the loose and their backs always threatened.

With the match again being played behind closed doors due to Covid restrictions, it was somewhat strange to see both sides making their pre-match preparations in the car parks and on the sidelines.

The St. Mary’s pavilion hasn’t been open since March, apparently, and the absence of a tap saw a mad scramble by the Lansdowne backroom team to the nearest available shop for water bottles for the squad!

The match was live-streamed by St. Mary’s, and the eerie absence of supporters was a constant reminder of the pandemic times we live in.

The players on the pitch did their best to distract us from our worldly woes for almost an hour and a half. While not a high-scoring affair – due much to the tenacity of both sides in defence – this was an absorbing encounter which harkened back to former AIL glory days and titanic contests between two of Ireland’s finest clubs.

Marys played down the hill in the first half, but the breeze appeared to be favouring the visitors. Lansdowne attacked early but were rebuffed by a penalty. Former Lansdowne scrum half Padjo O’Driscoll then made a fine break up the middle, only for a knock-on to halt matters.

However, this ultimately set up an attacking position for the home side with the ball being spun wide to left winger Matthew Opperman, son of former St. Mary’s great, Paul.  Young Matthew showed he was a true chip off the old block when he stepped inside and deftly beat two Lansdowne defenders to score half-way out. Centre Mick O’Gara added the extras and Mary’s were seven points to the good after the same number of minutes.

Lansdowne began to raise their game in the pack, with hooker Tadgh McElroy, second row Mark Flanagan and back rowers Mark Boyle and Danny Kenny in the van. Several good chances were created but not turned into points as some tigerish home defence withstood the mounting onslaught on the Mary’s line.

Kyle Dixon in the centre went of a mazy run which threatened to split the Spiritans’ defence, but overall Lansdowne’s possession was a little on the slow side and easily countered.

The pack’s momentum gradually built up, and a series of scrum penalties eventually saw referee Paul Haycock move under the posts to award a penalty try to level matters on half time.

The physical confrontation continues after the break, with Lansdowne rumbling forward and Mary’s attempting to spin the ball wide as often as possible. Despite both teams being prepared to throw the ball around, the defences retained their tight grip on the match, and ultimately it came down to the penalty takers.

First O’Gara goaled from in front of the posts to nudge his side ahead, 10-7, as Lansdowne infringed in the ruck under pressure.

That was in the 58th minute. Lansdowne had brought on Clive Ross for Aussie blind side James Hasson – a former professional League player in Australia and Irish Rugby League cap – and prop Greg McGrath at half time.

They subsequently used all of the bench and it was one of those replacements, last year’s Leinster Schools’ Under 18 out half and Kilkenny College man Charlie Tector, who then stood up to the plate.

On his senior debut, Tector coolly slotted two penalties in the 62nd and 73rd minutes to push his side into a 13-10 lead that they would not relinquish. The battle between young Tector and Stephen Madigan, no slouch himself in the No. 10 slot, will be fascinating to watch as the season progresses.

Ntinga Mpiko made an impressive return to the starting XV at tight head and will only improve with more game time following a full season’s absence through injury. Full back Liam O’Sullivan showed some nice touches, while Conail O’Doherty also did well coming off the bench.

So, a hard-fought win against determined opposition and much food for thought for Head Coach Mark McHugh, returning to his old club stomping ground, forwards coach Ben Armstrong and backs coach Scott Deasy as they seek to knit a new squad together.

Sterner tests will arise this season, but the potential is there to build a powerful side which will threaten for top honours in the New Year, Covid-willing.