Lansdowne FC – A History, Kicks Off The Sesquicentennial

Lansdowne FC > All News > Club > Lansdowne FC – A History, Kicks Off The Sesquicentennial 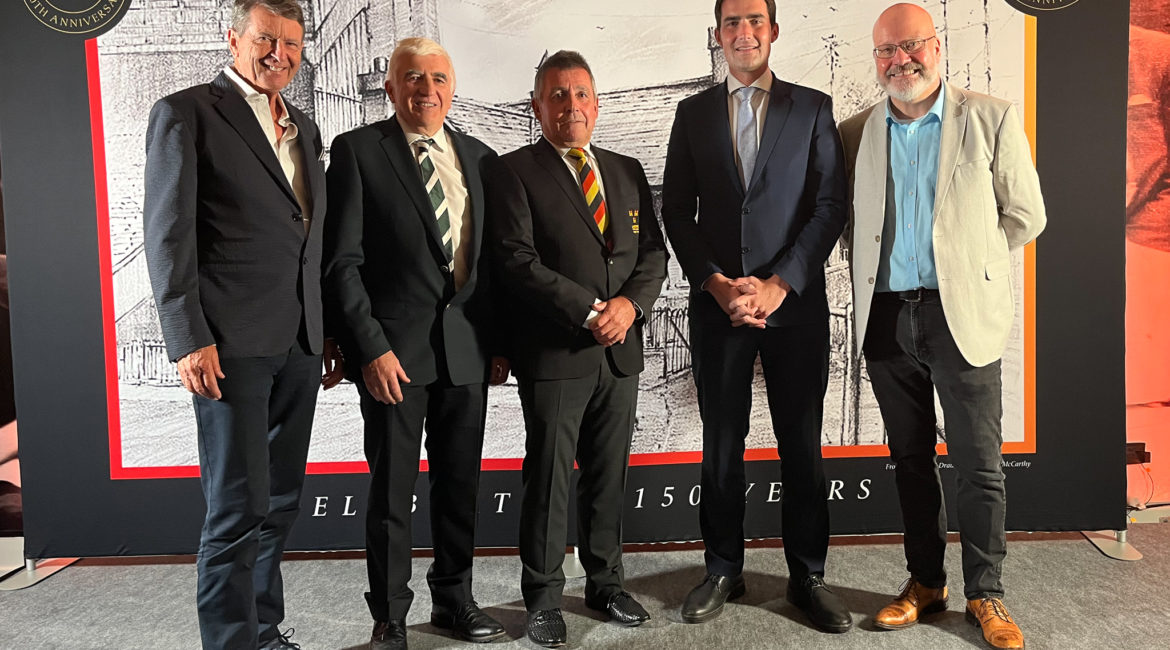 To say that the evening went well would be an understatement; it was a resounding success. Not only was the main function room full but the event’s proceedings were broadcast via video link to the main bar where the attendee overflow gathered.

Before I go into the night’s highlights, a few words of thanks to the sponsors and organising committee that made both the evening and the book possible.

The evening was sponsored by Westridge’s Shane Whelan. Lansdowne a History, the book, was sponsored by David and Cathy Shubotham. At the heart of the club lies an amateur ethos and club sponsors are an integral part of who we are and what we stand for. Our sponsors know that and for their support, we are very grateful.

Stephen Tunney was the chef d’equipe for the evening and his methodical preparation was evident in the smooth running of the event. The function room looked resplendent in the 150th celebration branding and the stage backdrop was a beautiful homage to the old Lansdowne FC clubhouse that stood sentry to the old Lansdowne Road. The club’s guests, including Debbi Carty, President of the Leinster Branch and other Leinster club presidents, were looked after by their appointed sponsors, and club members, old and new, were treated to a most engaging night’s entertainment. Thank you Stephen!

To Mark Dawson, the main clubman behind the book, a job well done! Mark worked with Dr. McGrath on every stage of the book’s development, from initial draft outlines, to working on the finer details of sourcing references for key events. Mark worked tirelessly representing the club and ensured that no stone was left unturned so that as complete a history as was possible could be collated and in due course, played back through the words and images as you read and see in print.

The MC for the evening was Hugh Cahill and it’s easy to understand why he is such a popular broadcaster. He’s funny, quick-witted, articulate, knows a thing or two about rugby and is genuinely nice to boot.

Hugh’s first job of the evening was to call on Jack Chambers, Minister of Sport. Minister Chambers spoke about the very noticeable growth of rugby in the past two decades and how Lansdowne FC stood at the very core of the amateur game in Ireland.

Hugh then introduced Mick Dawson, President of Lansdowne FC for the 2022/23 season. Mick is an experienced and very adept professional when it comes to addressing an audience. His presentation was engaging and was enriched throughout with anecdotes that acknowledged the rich history of the club, both past and present.

Mick was always conscious that he didn’t want to steal the thunder of the main event of the evening, Dr. McGrath’s interview by Hugh Cahill, yet he finished off his address by quoting from Dr. McGrath’s own words. No finer tribute!

To the main event, where Hugh went through a Q&A with Dr. McGrath. What followed was a trip down memory lane, as Dr. McGrath gave a potted history of the birth of the club, to the trauma delivered on the club’s members (and their families) in the Great War, through to the modern era and the club’s contribution to the domestic game, and its unrivalled contribution to both Ireland and Lion’s teams. Hugh deftly touched on major questions relating to nationalism, unionism, class, religion, and racism in sport, to the regenerative power of sport within the community. In the end, what made Dr. McGrath’s interview so enthralling was his obvious domain expertise. Little wonder when you consider the time he spent on the project and also, the fact that he is more than adept at telling a story.

Hugh and Dr. McGrath were then joined on stage by Leinster Head Coach, Leo Cullen, and Irish Times Rugby Correspondent, Gerry Thornley. Both Leo and Gerry talked at length about rugby in general and most importantly, how the amateur game is the key to the very future of the game in Ireland. There is no doubting Leo’s commitment to the AIL as he is a frequent visitor to games in Lansdowne. It affords him an opportunity to see his Academy charges play and also see other players who are grinding out the hard yards in the hope of securing an academy position.

When Hugh called an end to the proceedings, he drew the curtain on a most engaging evening. Attending a book launch is a rare occurrence for most people and attending a 150th celebration, almost a once-in-a-lifetime one.

As mentioned above, the book launch was the first official event in the calendar for the club’s 150th anniversary. Next up is the Gala Ball on Saturday, 1st October, another fitting celebration of the club’s 150th or sesquicentennial, to give it its proper name.