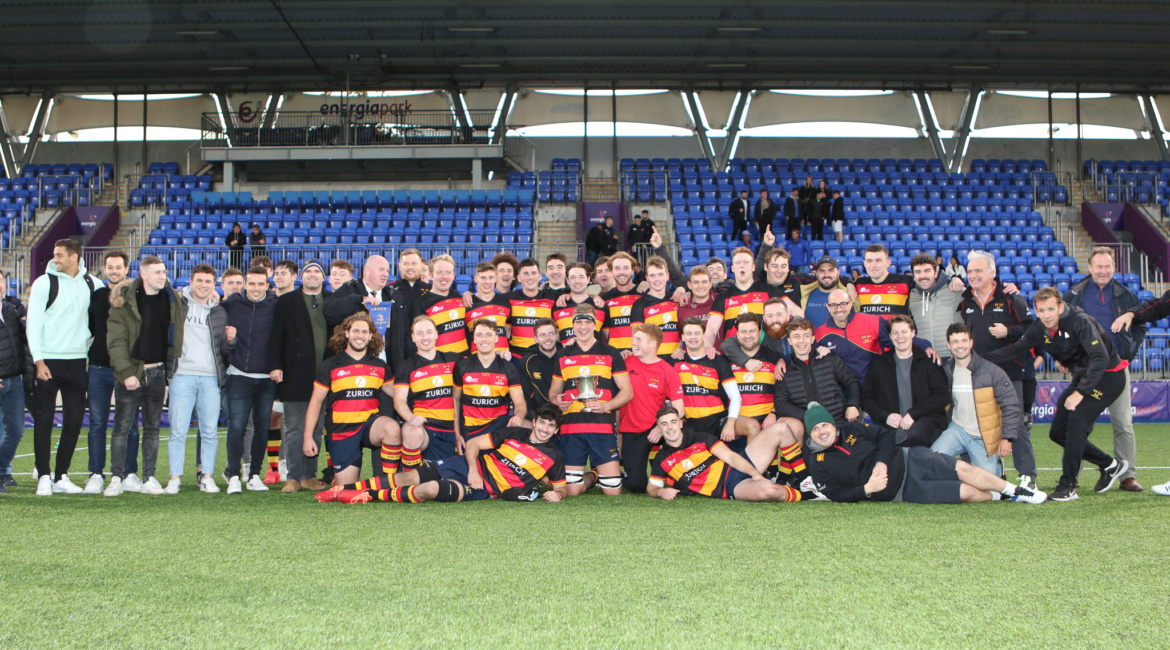 A great game on a great weekend for the club, Lansdowne J2s buried a few ghosts last Saturday evening when they not only regained the Albert O’Connell Cup after five years but they beat an Old Wesley side that has dominated this level for much of that time.

As starts go, it couldn’t have been much worse.  Wesley followed the kick out with their familiar dominant play: aggressive defence and powerful attack. We knew there’d be a storm and it came in waves as predicted. The first wave was a well taken try by Wesley after a clever kick for field position and a breakthrough midfield from the lineout that followed. 7 – 0.

The next wave looked like it would inflict more long-term damage: a tackle adjudged to be high not only meant our talisman outhalf Oran James was sin-binned, but he also suffered a concussion and so it was his substitute, Jack Carrigy, that would rejoin the game after 10 minutes. The penalty that followed made it 10 – 0 and another penalty by their accurate outhalf while we were down to 14 made it 13 – 0 as we approached the first water break.

Bleak as this looked to our growing band of supporters at the Bective end of the stand, neither the players nor coaches, Michael Quinn or Dave Tunney were especially fazed. As it turned out (spoiler alert!), that was as much as Wesley would score all afternoon; they had thrown everything they had at us and far from looking beaten, we began our comeback as the second quarter started.

Our first penalty points came soon after the resumption, but in truth, we had started to gain territorial control earlier. Peter Fitzgerald moved seamlessly from 15 into Oran’s outhalf slot and marshalled the game as if to the manor, or that position, born.  Fed by scrum half Jack Connolly’s crisp and consistent passes, he pegged the Wesley defence back to their own territory repeatedly.

Wesley’s frustration was starting to show when they knocked on after a lineout outside their own 22 and conceded a penalty in the scrum that followed. 13 – 3 didn’t just put us on the scoreboard, it was the sign of things to come and even though that was still the deficit at half time, the Lansdowne squad and supporters were the happier going into the break.

And a special mention here for the Lansdowne supporters. Led by President Colin “Moses” Goode, hordes of them made the arduous journey from HQ across the desert of Ballsbridge to the promised land of Donnybrook after the 1st XV had seen off Cork Con in the AIL fixture earlier. And whether or not Goodie’s followers had also seen off a few pints before they arrived in Donnybrook is immaterial, because their support definitely formed the 16th man on the pitch in the second half.

That half resumed as the first had ended. Lansdowne were behind on the board but definitely in the ascendancy. Composure in our set play mixed with a degree of adventure in the loose were proving a lethal cocktail for a tiring Wesley side. Our scrums were solid and our lineouts almost faultless, with captain Aaron Daly and Caoilim Fassbender providing just two of the excellent targets for dead-eyed thrower and hooker, Rik Van Dijk.

And the penalty count reflected our growing dominance. As we approached the final water break, Jack Connolly got another penalty making it 13 – 6. Wesley looked edgy and with good reason.

But continuing the biblical theme, we saved the best wine till last.  Soon after we entered the last quarter, multi-skilled Jack Connolly hoofed a massive punt from well inside our own half right down to the Wesley try line. As it bounced ominously towards the dead ball area, which would have yielded a scrum back, it took a bounce into touch.  The crowd went mad at the Bective end, while those that looked down from the Old Wesley balcony fell silent.

The lineout that followed was straight from the top drawer. Replacement hooker, Rory O’Donnell found captain Daly with a perfect throw and the maul that followed was so controlled and threatening as it worked its way to the Wesley line that some of their backs were drawn in to defend. This gave scrum half Connolly the cue to send the ball wide and in a sequence of frankly wild passes, the last man to handle the ball, Jack Carrigy (showing no signs of fatigue from having played out of his skin for the J3s against Coolmine the night before) went over in the corner for a try.

Confidence building steadily, we resumed play with a series of attacks and Wesley conceded another penalty. 16 – 13 and we took the lead for the first time after 75 minutes of play.

But Wesley weren’t champions for nothing, and they managed to get back into our 22 and win a very kickable penalty with just three minutes left to play.  But it wasn’t their day as, uncharacteristically, their outhalf mis-hit and the ball went wide.

The way it turned out, it wouldn’t have mattered. Straight from the kick out we recovered the ball yet again and forced another penalty just inside the Wesley half.  Consulting the ref how long was left, Captain Daly and kicker Connolly agreed it was a shot to nothing, so Jack had another go. And yes, you guessed it, he crowned a spectacular performance all day with a near perfect strike and put the ball squarely between the posts, just as the referee blew her whistle for the last time.

Lansdowne 19 – 13 Old Wesley and the Albert O’Connell cup returns to HQ at last.