Lansdowne J3s Prevail in another Sparkling Spectacle of Junior Rugby 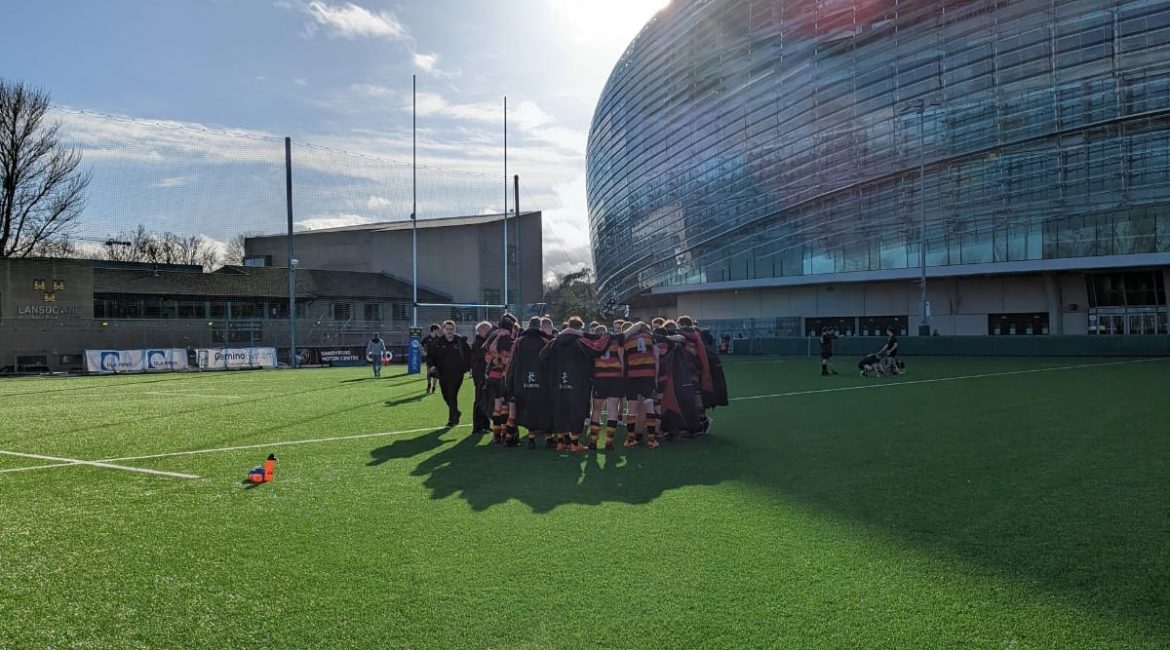 If proof was needed that junior rugby is alive and well in our own club and beyond, the treat on display between Lansdowne J3s and Terenure early on Saturday afternoon provided it.  What a game.

League leaders Terenure came to headquarters after a comfortable enough home win against our lads before Christmas. Whatever their experienced team lacked in fitness on that occasion was made up for with cunning. But Dave Tunney’s and Mark Quinn’s charges have acquired a few smarts over the season themselves and if anything are also fitter than ever. This was lining up to be a great contest.

From the kickoff, the visitors capitalized on a moment’s hesitation by us and charged through, pinning us down on our line for a sustained series of attacks.  But as our attention refocused, we deployed the same confident, calm and composed defence that would characterize all of our play that sunny afternoon.  Phase by phase, we clawed our way out of our danger zone and into theirs, helped in part by the referee penalizing Terenure repeatedly.  Eventually our pressure paid dividends when full back Jack Carrigy finished off a five phase move and scored near the five-meter line.  Acting captain and outhalf Rob Troy, who together with scrum half Conor Cleary, marshaled the proceedings masterfully all day, added the points and an excellent opening 10 minutes saw us ahead by 7.

But the tide would soon turn and now the ref was passing out a stream of penalties against us which, together with a blistering error-free attack from Terenure, saw us back on our line and conceding a try two minutes later. 7 – 7.

There was a time when the words of WB Yeats might have applied here, “Things fall apart, the center cannot hold …” but things didn’t fall apart and by God the centers did hold! Josh Healy and Thibault (“T-Bone”) Fraval put on as fine a display of attacking defence at 12 and 13 as you’ll see at any level.  Outweighed by their opposite numbers, their execution of the double-tackle was as relentless as it was ruthless. While one chopped at the ankles, the other smothered the falling attacker and invariably prevented an offload or even won a turnover.  A sublime example of the whole team’s attacking defence came at the half hour mark. Josh tackled his opposite number (6’ 2 and 18 stone) so hard that he dropped the ball.  Jack Carrigy pounced like an ally cat and kicked through and it was T-Bone that won the race to the line to touch down for our second.  Rob converted again to make it 14 – 7 as we went into the break.

As expected, the seasoned league leaders were far from giving up the ghost and the third quarter was an Olympic tussle of two teams playing at their best and clearly enjoying every minute. In spite of the high penalty count on both sides, the good humour and sportsmanship was evident in the smiles on the players’ faces and opposite team members helping each other off the ground.

But each was there to win the game too and it was Lansdowne that scored first in the second half when Cathal “Twinkle Toes” McNamara side stepped their scrum half (and four more defenders, according to himself in the bar afterwards!) and then powered over to score. Rob obliged yet again, and it was 21 – 7 as we entered the last quarter.

But if we were hoping for the visitors’ fitness to let them down, we would be disappointed. Deceptive stamina and clever substitution saw Terenure lift their game yet again and they embarked on an excellent period of varied play, using the full pitch and their faultless handling skills to full advantage. In spite of our still heroic defence, they were rewarded with a well-deserved try. They missed the conversion and so the score was 21 – 12 with ten minutes remaining.

Now it was time for our stamina and bench management to come to the fore as the pace of the game started to show.  Sub Ruadhan Pitts brought a burst of youthful energy, while Ludovic Amblard brought just energy. Fortunately, Ludo was spared too much exertion as a little more than two minutes after he took to the pitch, he was yellow carded (“Carton jaune”, as he helpfully explained later).

But being down to 14 men for the second time in the game didn’t dampen our resolve. The last ten minute saw us launch attack after attack on the Terenure line and it seemed like a miracle, but also credit to the visitors’ defence that Oscar O’Cleirigh, Alex McEvoy or Ross Smith didn’t get over for a much deserved bonus point try.

But it wasn’t to be.  We didn’t get the bonus point, but we did get an excellent win over the league leaders and one of the best performances of the year … so far.  What a game.