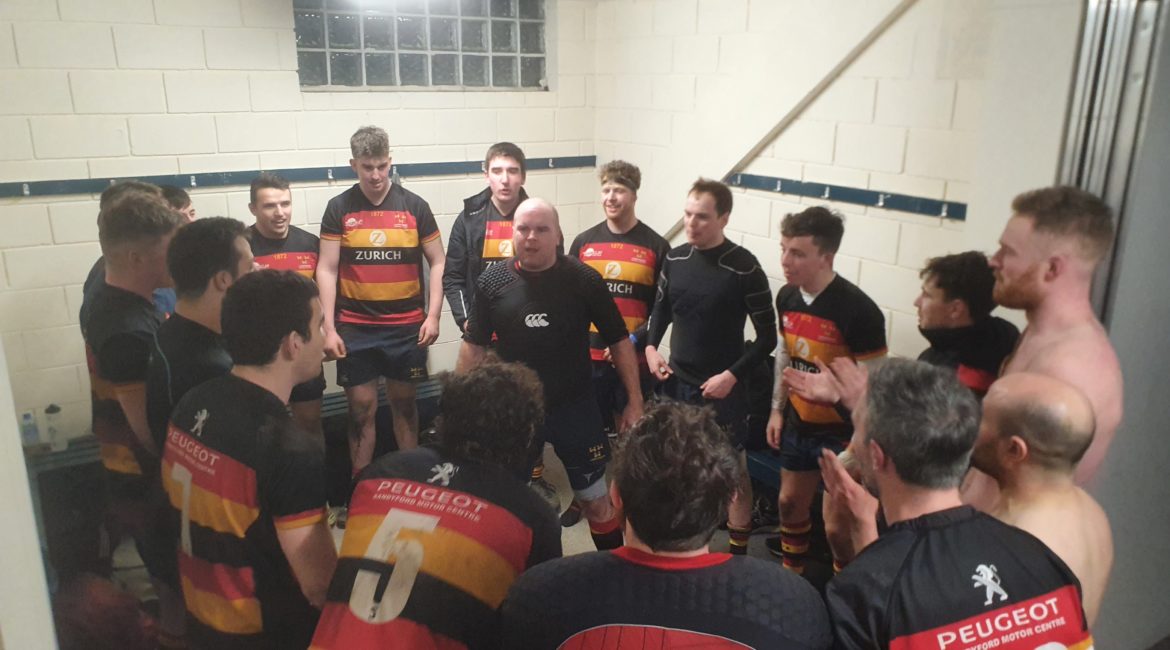 Lansdowne J3’s needed a bonus point (four try) win keep the pressure on Coolmine RFC in the race to the play offs in this league, and anyone who left at the first water break would have been forgiven for thinking such a result was on the cards.  But it wasn’t to be.  Lansdowne’s dominance of territory and possession for most of the first half yielded only a two-point margin of 5 – 7 at half time and the way the winds of fate seemed to be blowing, we looked like things would get worse before they got better.  While a lesser group of lads might have let the game slip away after a series of mishaps, this lot eked out another all-important victory

But we’re getting ahead of ourselves.

From the kick-off we lived inside the Marys’ 22 and attack after attack seemed to falter at the last pass or fall foul of an unseen infringement. Nevertheless, just on the point of the water break at 20 minutes, blind side wing forward Conor Horan got his just reward for all of his powerful line breaks with a try.  Outhalf Rob Troy added the two points and we enjoyed our drink of water thinking better was yet to come.  Alas, the home side had other ideas and when play resumed their mobile midfield found their feet and started counter attacking us whenever they got possession.  This seemed to disorientate our side which had become accustomed to only attacking and so on one such “Hail Mary” counterattack and kick through, our defences stumbled, tripped, crashed into each other and somehow contrived to gift the home side a try. Miraculously, they missed the conversion, so we still held a narrow lead, 5 – 7.

Regaining our composure, we started to lay siege to their line, with scrum half Aaron Grogan threating from every side of the pitch. His efforts seemed to be rewarded as he touched the ball unto the post cushions, but not only was his (“absolutely certain”) try disallowed, he also shipped a game ending injury in the process.  Soon after, an almost carbon copy happened when captain Rob Timlin finished off a series of attacks on the Marys’ try line only to have his claim to a try disallowed too and he also shipping a similar injury.

The second half threatened to descend into a messy tit for tat exchange with our lads apparently out of ideas and failing to penetrate and Marys making impressive individual runs but never putting a comprehensive attack together.  But it was supervet sub, Rob Manning that came on board with 20 minutes to go that immediately settled the ship. His impact was felt first by a Marys’ wingfoward when Rob cleaned him out of a ruck, and then a few others who had the temerity to attack us down his wing. But it was, as always, in attack that Rob regained control of the game for Lansdowne.  Calling the shots from well behind a scrum just outside the 22 and 10 meters in, he joined the line inside centre Josh Healy, running a straight line at pace over the gain line. He beat his opposite winger for pace and couldn’t be stopped either by the full back as he went over for our second try. What a great comeback after a nasty injury before Christmas!  One of the other Robs (Troy) continued his competent kicking and we were 5 – 12 with 10 minutes to play.

Marys did secure another try in the closing minutes of the game, but their kicker was not in as good form as ours and they missed out on sharing the points with the game ending 10 – 12.

It wasn’t exactly champagne from start to finish, and we didn’t make the next few weeks in the league easy for ourselves, but in previous years this team might not have hung in there for the win and that’s a sign of the season we’re having.