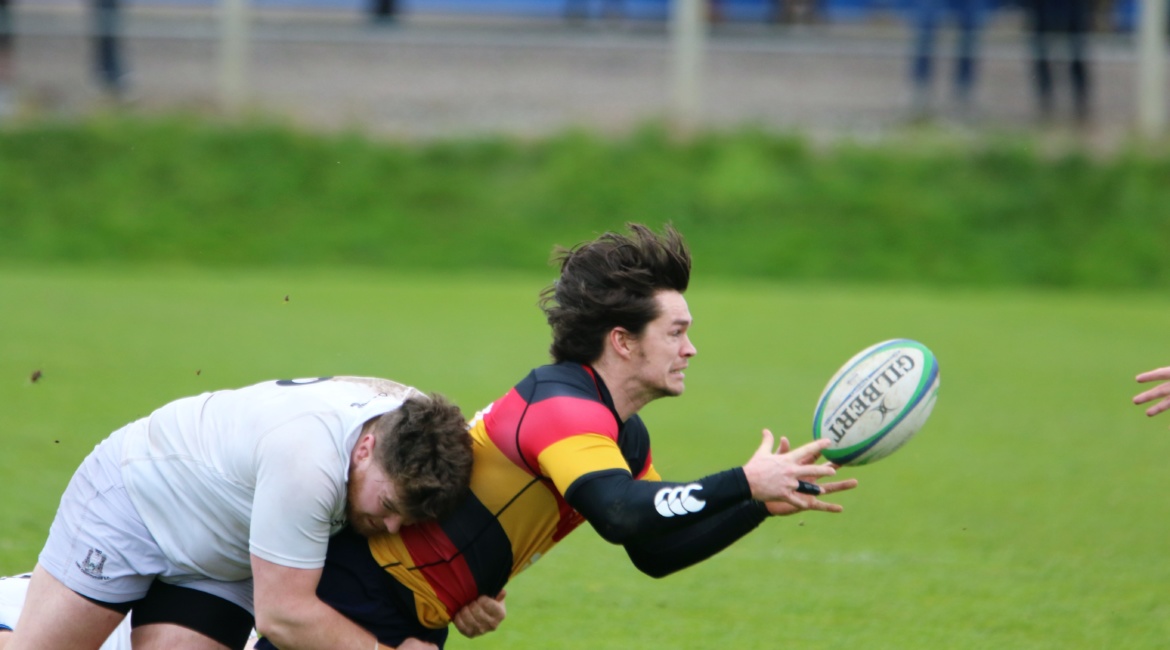 A great second half come-back saw a battling Lansdowne side almost snatch what would have been a memorable result in Saturday’s always-engaging Energia AIL Division 1A clash between reigning Champions Cork Constitution and the visitors.

Instead, the Headquarters side had to be content with a well-deserved losing point as they pinned the Lee-siders to their collars in a resurgent and committed second half display.

Lansdowne were disrupted early on with the loss of both Jack O’Sullivan and Mark Flanagan after 2 and 5 minutes, respectively, through blood injuries. While O’Sullivan returned quickly, the “nose job” suffered by Flanagan saw him replaced permanently by Jack Dineen.

Dineen went on to have a great match, carrying well and dynamic in the tackle.

And tackling was something Lansdowne had to do a lot in this match, in particular during the opening quarter, when the visitors had little or no possession and were pinned back in their own half by a wave of attacks from the home side.

The Con pack, one of the burliest this scribe has ever seen in AIL rugby and sprinkled with Munster squad players, were physically powerful and were driven by the astute Duncan Williams at the base.

The first 10 minutes were spent on the defensive, as the Lansdowne pack struggled to get to grips with their beefy opponents. The home side then put a good phase of play together only to concede a 5-metre line-out.

Lansdowne failed to grasp the chance to clear their lines, however, as the throw in was crooked. Con took full advantage from the resulting scrum, No. 8 Evan Mintern surging forward and off-loading to 2 nd row Brian Hayes for the opening try. Out half Aidan Moynihan added the conversion for a 7-0 Con lead after 11 minutes’ play.

The visitors were slowly coming to terms up front, as the initial home buzz dissipated somewhat. A scrum penalty won in the 19 th minute proved a valuably psychological boost to the Lansdowne forwards. The line out was won on the 22, but the ball was turned over in the subsequent ruck.

The line out was proving unreliable, and a good opportunity from 10 metres out went astray; Lansdowne’s fourth line out loss at this stage.

A good counter by full-back Eamonn Mills saw a penalty won in the 25 th minute, which was goaled by out half Tim Foley to reduce the margin to 7-3.

Lansdowne were now playing and competing better, moving the heavy Con forwards around and probing in the backs. The home defence was well-organised and little headway was made in the face of some stern defence.

On 32 minutes a sniping break by lively scrum half Ross Barron saw the ball recycled and Foley floated a cross-kick behind the Con line which almost saw winger Daniel McEvoy in.

Instead, it was Cork Con who struck again just before the break when their powerful captain, centre Niall Kenneally, burst through the middle to set up his centre partner, Jack Costigan (son of Lansdowne stalwart of former years, Paddy) for a try close-in.

Moynihan again added the extras and half time saw Constitution leading by 14 points to 3.

Lansdowne went for the bull-pen on the break, Craig Ronaldson coming on at fly half with Foley moving to the left wing and Harry Brennan into the centre. Dan Sheehan came on at hooker and made an immediate impact.

The introduction of fresh faces and the organisational skills of former Connacht star Ronaldson, a member of Lansdowne’s 2013 AIL winning side, in particular, began to take effect. Not, however, before the Lee-siders struck again with a great counter attack which saw a great off-load by Mintern for full back Tomas Quinlan to score. This came after an initial thrust down the left by winger Rob Jermyn which set up the move.

Moynihan kicked his third conversion to stretch his side’s lead to 21-3 after 43 minutes.

This was to be the last time the home side troubled the scoreboard, however, as the lively Lansdowne pack settled to their task and the home forwards began to run out of puff. Eamonn Mills was involved once again in a slick piece of Lansdowne back play that saw No. 8 Neal Moylett cross for his debut Energia AIL try on 56 minutes.

Foley added the extras and Lansdowne were suddenly firing. Ronaldson was the catalyst, while captain Jack Dwan, Dineen, prop Greg McGrath and the back row of Jack Sullivan, flanker Joey Szpara and Moylett were galvanised into even greater efforts.

Con began conceding penalties – and territory – as the pressure on their tiring forwards mounted. 21-10 became 21-15 on 70 minutes as sub-hooker Adam Boland crossed for his third try of the season from a maul and then 21-17 as Foley knocked over the conversion.

It would be great to report that Lansdowne came back to snatch what would at one time have seemed an unlikely winning score but, alas, it was not to be. Only one further chance presented itself, but the ball was knocked on after 74 minutes as the wily Con team starved the visitors of possession and ran down the clock.

Lansdowne had to content themselves with a losing bonus point; this was a much better and tighter performance that the previous week in Garryowen, however, in what was a cracking match, entertainment-wise.