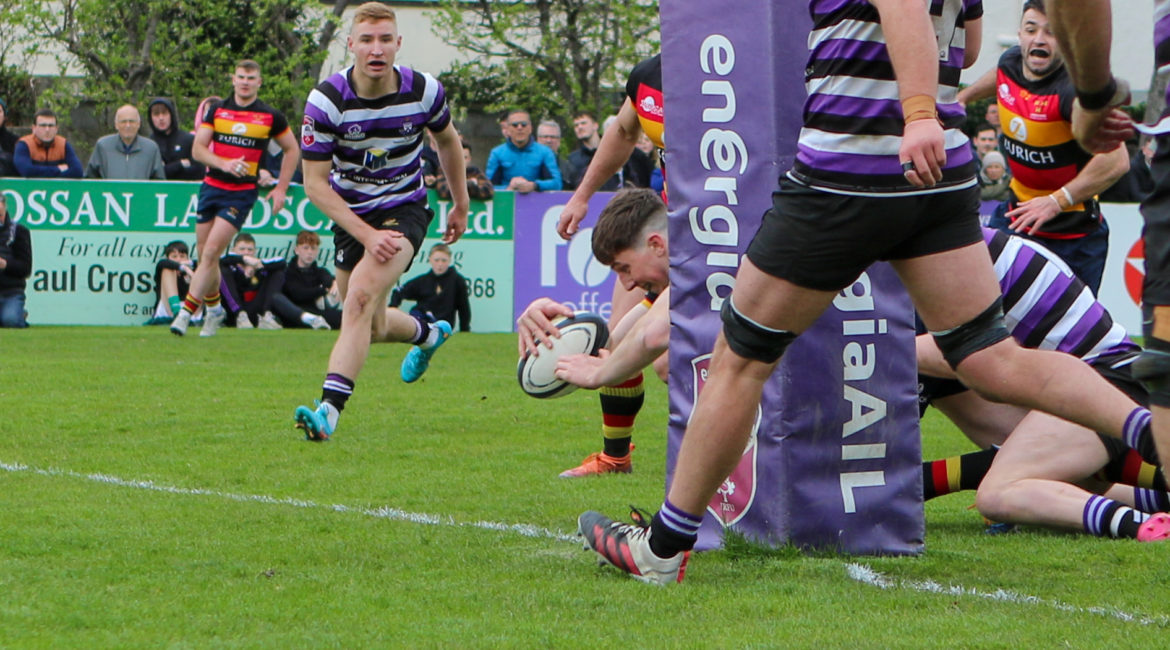 Competitive sport can be cruel, with the margin between success and failure often separated by a hair’s breadth.

For many Lansdowne supporters, last Saturday in Lakelands Park will go down as such an occasion.

Having defended a narrow lead, 13-12, superbly for 27 minutes of the second half, a courageous and disciplined Lansdowne side finally conceded a try to a storming Terenure team in the 76th minute of a pulsating game played in front of a large and enthusiastic crowd.

The conversion as missed, but the home side’s talented place kicker, winger Caolan Dooley, tacked on a penalty quickly as his side once again laid siege to the Lansdowne line to establish a 20 point to 13 lead.

In truth, Lansdowne had been living off scraps for most of the game, and many sides would have buckled at this stage and bowed to the seemingly inevitable. Mark McHugh’s men are made of sterner stuff, however, and they conjured up another attack as the clock entered time added on.

Playing off a penalty advantage, replacement centre Stephen Madigan launched a cross-field kick in the direction of left winger Sean Galvin. The winger gathered the ball on the full and raced over the line for a superbly crafted try to put his side within two points of the lead. He even managed to go around behind the line to narrow the angle for his kicker a little.

Out half Charlie Tector, who had played an excellent match, lined up the conversion. Everyone in the ground seemed to collectively hold their breath as the ball sailed toward the posts… only for it to drift agonisingly wide across the breeze. The slimmest of margins…

Terenure had started the day as warm favourites on the back of their recent form and away win against the Headquarters side in the second last round of regular season matches by a 42 points to 30 margin.

For their part, Lansdowne had struggled in their last three matches and there can be little doubt entering the fray that the momentum was all with the D6 side.

The early signs appeared to confirm the bookie’s odds as Terenure dominated the set pieces, winning three penalties in the first four scrums and putting the visitors’ line-out under considerable pressure.

Aided by the significant breeze and a multiplicity of possession, the home side pressed forward in attack. Their tactics were, however, rather limited, consisting of taking the ball up the middle and making themselves relatively easy targets for an ever-willing Lansdowne defence.

Pressure and territory will tell, and Dooley was offered and accepted penalty chances in the 4th, 12th, 25th and 32nd minutes to put 12 points on the board for his side.

Lansdowne absorbed huge pressure during this period, with Clive Ross superb at No. 6 and captain Jack O’Sullivan putting in sterling work in defence, assisted by hooker Luke Thompson and second row Jack Dwan, in particular.

In attack, Lansdowne kept the ball in hand and wisely didn’t try and kick into the breeze. They were well martialled and the much-vaunted Terenure forwards struggled to assert any real control in the loose and conceding 8 penalties to 6 in the half, notwithstanding their dominance in the tight.

The Headquarters side managed to stem the Terenure tide, and Tector knocked over two penalties into the wind on 27 and 39 minutes to keep his side in touch at the break.

Nowadays, the wind is not the same factor as it was in previous rugby eras. Game management has improved immeasurably in this regard, but at 12-6 down and the stiff breeze to come, Lansdowne supporters were nonetheless feeling a bit more optimistic as the second half commenced.

Nor was their cautious optimism misplaced during the early second half exchanges. Tector will be disappointed to have missed a penalty from 30 metres out in the 43rd minute, but his side continued to press.

A series of attacks ensued, with Lansdowne making good use of strong-running right winger Peter Sullivan as a launching pad and centre Andy Marks running good lines in attack.

Lansdowne forced a scrum on the Terenure ’22 and set up a number of attacks which brought them to the home line. A series of pick and drives ensued before the ball was moved wide to Tector.

The out half is a big man and he used his bulk to good effect to cross beside the posts for a well-worked try which he converted himself to nudge his side ahead for the first time.

To their credit, Terenure slowly build up a head of steam and began to mount pressure on the Lansdowne line. The visitors defended heroically, and time and time again during the following 27 minutes they repulsed everything the Lakelanders could throw at them until that fateful 76th minute.

Finally, the Lansdowne defensive wall was breached and full back Adam LaGrue crossed wide on the left to push his side four points ahead and Dooley’s fifth penalty establishing a seven point lead shortly afterwards.

There was still time for Sean Galvin to narrow the margin to two points and give his side the hope of extra-time but, if the truth be told, Terenure were worth their victory on the day and we wish them all the very best in the final.

The game also doubled as the Leinster Senior Cup final, and Terenure took that honour as well. I suspect the celebrations in the home club house went on well into the wee hours on a famous day for the D6 side as they qualified for their first ever Energia-sponsored All Ireland League Division 1A final.