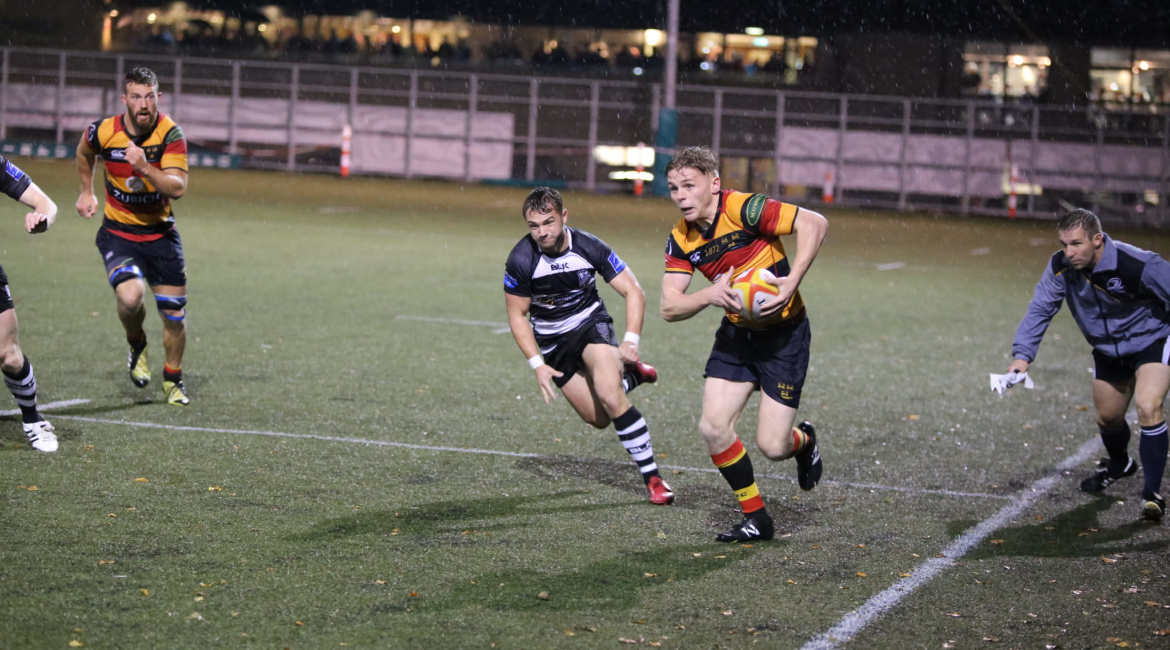 Just prior to kick-off, the rain came down in bucket loads, and then got heavier. The result was a wet, slippery ball and a tight contest that would be fought out mainly through the two packs.

Old Belvedere have had the “Indian Sign” over Lansdowne in recent times, and recorded a double over the Headquarters side during last season’s Ulster Bank All Ireland League campaign. Lansdowne were therefore keen to gain revenge over their local rivals, and started well in the atrocious conditions.

Early signs were positive for Lansdowne; they got the nudge on in the first scrum and out half Scott Deasy asked some searching questions of the visitor’s defence with several probing kicks. One of these led to a penalty in the 5th minute on the 10 metre line, from which Deasy was narrowly wide.

In the 11th minute a Belvedere chip through from out half Willie Staunton was gathered by full back Danny Riordan and he almost set open side Michael Oyuga away, but the ball was spilt. This was to be a frequent occurrence in the most testing conditions.

Both sides were competing strongly at the breakdown, and many of the collisions were not for the faint-hearted. Lansdowne’s early advantage gradually eroded as the Lodge came more into the match. A blocked clearance led to Lansdowne touching down in goal and a five metre scrum to Belvo. From the subsequent series of attacks Lansdowne were caught off side in front of the posts in the 22nd minute and Staunton stood up to record the first penalty of the match.

Staunton, who was to win the “Man of the Match” award, struck two further penalties after 25 and 32 minutes to stretch his side’s lead to 9-0. Old Belvedere had adapted better to the conditions and were playing the better rugby. Winger Charlie McMickan was just wide with a long distance Lansdowne penalty attempt in the 27th minute before Deasy put the home side’s first points on the board after 36 minutes for 9-3 to the visitors.

The rain lightened a little, and with it Lansdowne’s spirits rose. McMickan chipped and chased the ball to the goal line, but Belvedere scrambled to clear their lines. Shortly afterwards, McMickan kicked a great penalty from 45 metres to reduce the half time deficit to just 3 points, 9-6 to the visitors.

With the rain finally relenting, the players got a chance to play some more expansive rugby. Hard as they tried, however, the Lansdowne backs were unable to break through a very solid and well-organised Belvo defence. Both sides settled into a kicking game, with the Old Belvedere halves, Staunton and Charlie Rock, directing traffic well for their side.

On 48 minutes, Lansdowne had a great chance of a try when scrum half Alan Bennie took a quick tap penalty on the 10 metre line and made it to within 5 metres of the Belvedere line before being hauled down. Lansdowne went wide from the subsequent ruck, but the ball was spilt and a great chance went a-begging.

Lansdowne continued to enjoy their best passage of the game, and were over the visitor’s line only to be given a 5 metre scrum. A key incident then took place as, following two reset scrums, the Lansdowne front row of Jacob Walsh, Tyrone Moran and Ian Prendiville got the better of their counterparts and drove them towards their line. A penalty seemed inevitable, but the ball suddenly squirted out and winger Mickan was tackled into touch.

Worse was to come after 65 minutes when Belvedere raised the 20-minute siege to score a breakaway try when sub back row Paul Pritchard, formerly of Ballynahinch RFC, dribbled the ball over the line for a try that was against the run of play. Staunton added the extras and suddenly there was clear water between the sides at 16-6 in what were difficult scoring conditions.

The home side were rattled by this unfortunate concession but, to their credit, they rallied and immediately countered. Their lineouts did not help in terms of establishing a solid attacking platform, but play was scrambled downfield. A Belvo scrum was turned over in the 79th minute, and the abrasive Joe McSwiney emerged from a wedge of players to dive over for a try. Deasy slotted the conversion to reduce the score line to the narrowest of margins, 16-13.

The home side tried to run from deep on the restart, and full back Eamonn Mills, who had a good match in the wet conditions, carried the ball to the visitors 10 metre line. The ball was lost forward, and with it went Lansdowne’s final chance to snatch a victory that would not have been undeserved on the balance of play.

One couldn’t help feeling that this was one that Lansdowne let slip away. They must learn to be more ruthless and grasp the limited chances which arise in such punishing conditions. Old Belvedere, to be fair, adapted better on the night and their defence was always well-martialled, giving very little away. A bonus point gained, the Headquarters side remain at the top of the table on points-difference from Young Munster.