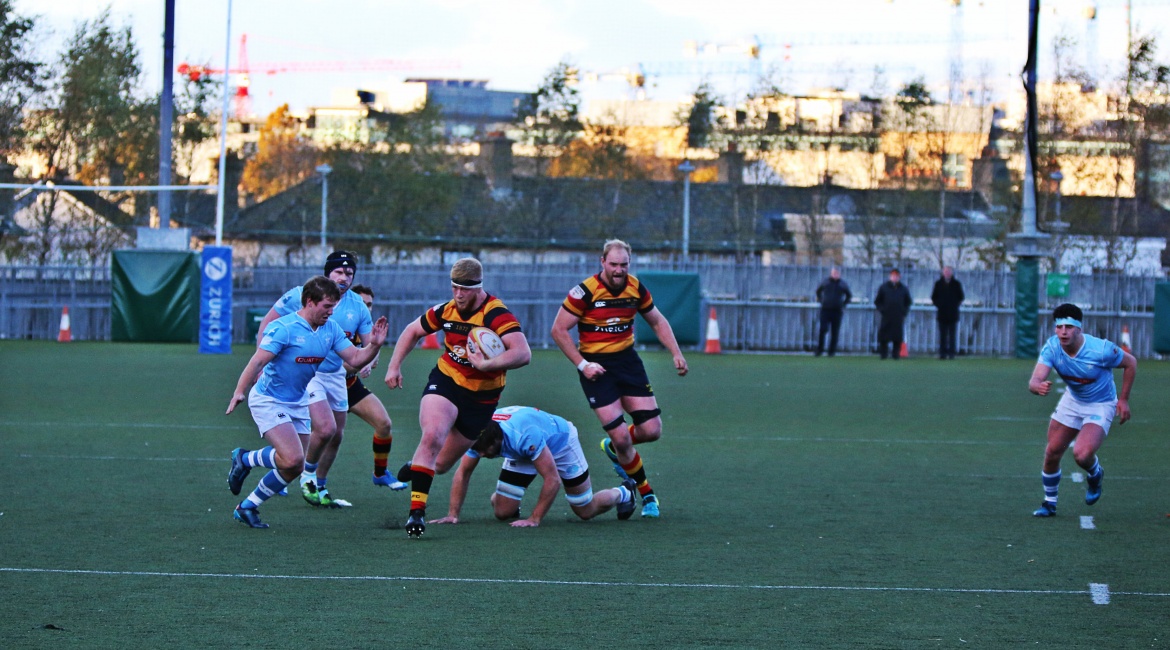 Well, it had to happen sometime. Lansdowne’s remarkable 12-match winning run in Ulster
Bank Division 1A was unlikely to last the season, and it duly came to an end against a
stoked-up Garryowen side who have now won all of their 6 matches at home… Records are
made to be broken!
Lansdowne can have few complaints regarding the outcome of last Saturday’s match, as a
Garryowen side inspired by their scrum half and captain, Neil Cronin, stood up gamely to
everything Lansdowne could throw at them, and then had the resilience to pull away again in
the end.
The Headquarters side can consider themselves a little unlucky not to come away with a
losing bonus point but talisman out half, Scott Deasy, had a rare off afternoon from the
kicking tee. Despite this, Lansdowne still had sufficient chances to snatch an unlikely victory,
only for mistakes to hamper their efforts.
The Dooradoyle pitch stood up well to the week’s rain – it was unplayable last weekend –
and a shower before kick-off quickly blew over. The home side played with the benefit of the
breeze, and were quickly into their straps.
Referee Kieran Barry penalised Lansdowne in the first scrum, and this phase of play was
particularly chaotic all afternoon – this writer recorded 9 scrum penalties during the game, 5-
4 in favour of the home side, as first one pack and then the other got the nudge on. The first
of these infringements say Cronin kick a penalty from half way out on the ’22 to give his side
a lead after only 4 minutes.
Lansdowne failed to take advantage of two penalties in the home ’22, with the line-out
misfiring. This profligacy was penalised by Garryowen on the quarter hour when a well-
flighted cross-kick by out-half Jamie Gavin was fielded by left wing James McInerney, who
saw off a couple of would-be tacklers to cross out wide for a try beautifully converted by
Cronin for a 10-0 lead.
Lansdowne won the restart and immediately set up an attack. A floated kick came to nothing,
but the sides were called back and the visitors awarded a penalty for an incident in which
home loose-head Niall Horan was yellow carded. Scott Deasy cut the margin to just seven
points from the kicking tee.
This effort was matched by Cronin with a scrum penalty after 25 minutes and another effort
from him for an off-side saw the scrum half stretch the lead to 16-3 after 29 minutes play.
Lansdowne were struggling to put some coherent phases together and were guilty of too
many errors. They also threw an inordinate number of intercepted passes during the course of
the match and could have been punished more severely on several occasions. They did
manage to build a strong series of attacks just before half time, which culminated in right
winger Foster Horan crossing for an unconverted try which reduced the deficit to 16-8 and
gave hope for a strong second half performance.

The first few minutes of the second half saw Lansdowne penalised on their own scrum ball.
In the next scrum a minute later, they were awarded the penalty. The unpredictability of the
set piece was not helping either side, however, and from the latter penalty Lansdowne’s line-
out maul was driven into touch close to the line and a further opportunity was lost.
Mike Ruddock’s men were beginning to put some good phases together, although they were
finding it difficult to break down a resolute home defence. Sub-hooker Tyrone Moran and
No. 8 Willie Earle were leading the Lansdowne charge. Deasy narrowed the gap to just 5
points with a penalty from in front after 55 minutes, and the momentum appeared to have
shifter firmly in the visitor’s direction on the hour when Moran was driven over the line in a
strong forward surge to level matters at 16-all.
In previous matches, Lansdowne had used the third quarter to get on top of determined, but
tiring, opponents. The bench came on, but instead it was the home side who seized the
initiative, with Cronin kicking a penalty after 70 minutes to restore a three-point lead.
It was the same player who intercepted a Lansdowne pass and initiated a 60-metre break-out
that saw some clever interplay between himself, centre Hugh O’Brien Cunningham and
winger Liam Coombes. The last-named crossed in the corner for the score that finally broke
Lansdowne’s fighting spirit. There was still some time for the Headquarters side to launch a
series of attacks which, however, failed to breach a now confident home defence.
An astute reader of the game, Martin Deasy, had noted that Garryowen were the best team to
visit Lansdowne Road before Christmas. There was certainly no shame in having lost our
unbeaten record against such a good side.
The monkey is now off Lansdowne’s backs; they say you learn more from your defeats that
from your victories, and how strongly Ian Prendiville and his men rebound from this set-back
will be the measure of the undoubted character of this fine young side. The goal of a home
semi-final is still very much on the cards, and with your support can and will be achieved.