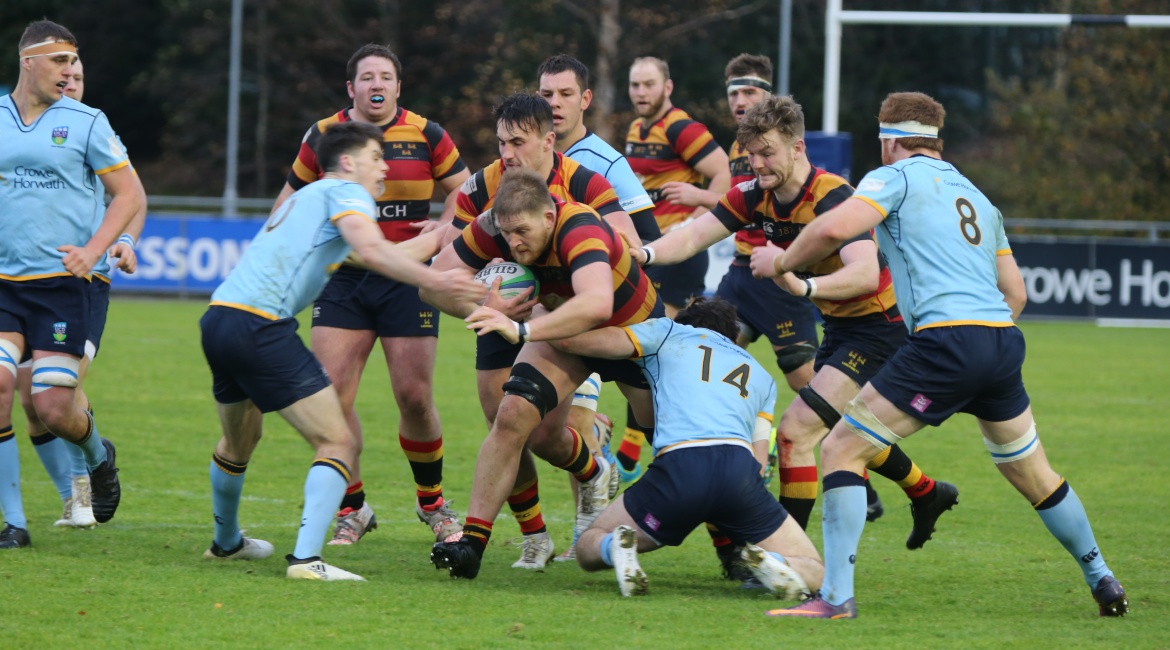 “We’ve become the benchmark side in this year’s competition”, commented Mike Ruddock – “the opposition come out of the blocks, all trying to become the first side to beat us”, said the former Welsh Grand Slam Coach.

Head Coach Ruddock was explaining what appears to be an emerging pattern this season; Lansdowne starting slowly, only to move up through the gears in the third quarter to put the opposition away.

The pattern was there again on Saturday last in Belfield, an early surge putting the visitors on the back foot as a lively UCD outfit took the match to them. UCD’s superiority was reinforced by referee Gaffikin’s seven penalties in their favour which saw the Students take an early 6-0 lead through the deft boot of out half Harry Byrne, younger brother of UCD and Leinster’s Ross, after 21 minutes.

Lansdowne slowly clawed their way into the match, as their new front row began to settle down. Loose head Denis Coulson, a Connacht player, a former Lansdowne Under 20 before a spell in France, was making his debut for the Headquarters side, and became their seventh prop used this season – a tribute to the club’s strength in depth in the front row.

Out half Scott Deasy helped settle the ship with a penalty in the 23rd minute, before Byrne slotted over his third to restore the home side’s six-point advantage. Lansdowne eventually paid the price of the heavy penalty count when flanker Aaron Conneely was sin-binned in the 30th minute. It was a measure of Lansdowne’s resilience and hard work that they won the period while down to 14 men by 3 points to nil, Deasy narrowing the half-time deficit to three with his second penalty in the 35th minute.

Overall, however, Lansdowne can consider themselves a little fortunate to be only three points, 9-6, down at the break. Their immediate upsurge in tempo following the restart, however, saw them on the attack. Some lovely interchanges between captain Ian Prendiville, No. 8 Willie Earle – both of whom enjoyed excellent games – and young hooker and former UCD player Ronan Kelleher (younger brother of Cian) saw a penalty advantage.

Quickly taken by Charlie Rock, the ball was moved right for always-dangerous centre Harry Brennan to glide over for the first try of the afternoon. Deasy added the extras and Lansdowne were ahead for the first time, 13-9, after only two minutes play following the restart.

Moments later, following a huge hit on Kelleher, the touch judge’s intervention for foul play saw Scott Deasy put the ball deep into the UCD ’22. From the subsequent line-out maul Prendiville was just stopped short before Kelleher applied the killer touch and crossed for a pressure try on 47 minutes. Deasy again obliged with the conversion and Lansdowne had suddenly opened up some clear water at 20-9 ahead.

You write off Collidge at your peril, however, and they bounced back immediately when, following a quickly-taken tap penalty by livewire scrum half and UCD captain Jamie Glynn, winger Jack Ringrose (yet another younger brother!) crossed in the corner, with the referee appearing to overrule the touch judge’s raised flag.

Byrne kicked an excellent conversion, and UCD were back in it at 20-16. Lansdowne’s greater nous was rewarded on 51 minutes when the Student’s were penalised for not releasing; Deasy’s straight-forward effort from 28 metres restoring his side’s two-score advantage.

The game had suddenly fired into life, with end-to-end attacking plays. Second row Gavin Thornbury and UCD No.8 Peadar Timmons were prominent, although they were thwarted when their line out maul was held up to concede a scrum, and Prendiville, playing an heroic captain’s part, won a vital turnover for Lansdowne on 56 minutes, in what was a key match moment.

Lansdowne surged back on to the attack, and Brennan once again made serious inroads towards the Collidge line. Only foul play by Timmons prevented a score, and he duly paid the price with 10 minutes’ absence. Lansdowne took full advantage from the subsequent scrum to force a penalty try and stretch their lead to 30-16 after 67 minutes.

Tyrone Moran came on at hooker for Kelleher, and Kiwi flanker Jacob Coghlan, one of two late replacements on the Lansdowne bench, came on to make his senior debut for Lansdowne. Winger Adam Leavy took a great ball and set up the ubiquitous Prendiville and Earle for a surge to the UCD line. The ball was lost forward from the following maul, however, and the chance was lost.

UCD threw caution to the wind and launched a series of attacks which were only repulsed with difficulty. Eamonn Mills was cool-headed and reliable as always under pressure, clearing his lines with long kicks and marshalling the outside defence well.

Collidge’s efforts were rewarded in injury time when, following one of many strong surges by impressive tight-head Jeremy Loughman, he set up centre Tommy O’Brien for a terrific surge past several Lansdowne defenders for the try of the match. Full back Ciaran Frawley added the conversion to put UCD in the frame for a losing bonus point and a 30-23 score line in favour of the visitors.

Due to the weird AIL fixturing, both sides must do it all over again next Saturday, this time in Lansdowne Road, when the return of International 7’s players may benefit both sides but Leinster A’s match in the B & I Cup will hit UCD harder than Lansdowne. The pre-match Christmas Lunch has been a sell-out for some time; if you are attending, please remember to donate generously to the collection in aid of the Peter McVerry Trust, and help Dublin’s homeless at Christmastime.