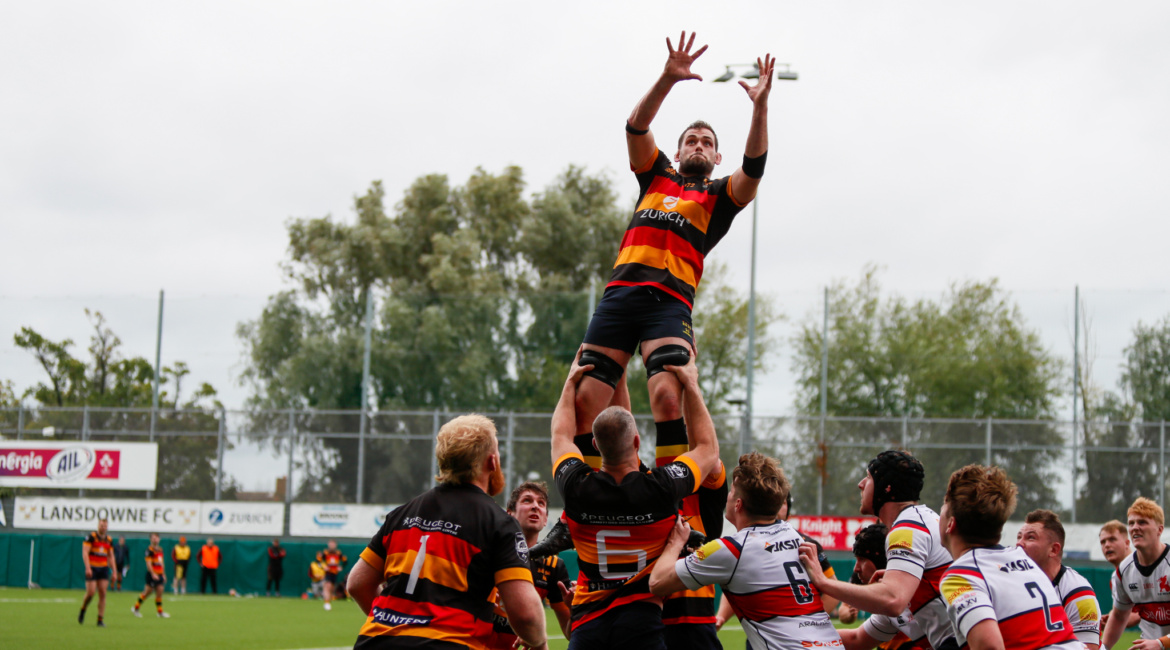 This was a history-making Lansdowne home match of sorts, being the first live-streamed by the Club from Lansdowne Road since the introduction of the Covid-19 restrictions back in March. Micky Quinn and David Priestman from Old Wesley provided the match commentary, with the former providing some interesting insights into provincial rugby players and Limerickmen, in particular.

Wesley came into the fixture with the advantage of having played in the first round of matches last weekend and had signalled that they would be no pushovers with a bonus-point victory over UCD.

The visitors duly began the match on the attack, only to yield up a good attacking position when conceding a penalty.

Lansdowne took full advantage of the sharp breeze to advance play into the Wesley half, and scrum half James Kenny seized on some slack defence on the side of a maul to canter up the middle and dot the ball down between the posts.

A quick drop goal attempt saw the conversion missed and, dare I say, a valuable lesson learnt by the home side.

Lansdowne appeared to be the stronger up front with some robust carrying by the pack from captain Jack Dwan and back rowers Clive Ross and Danny Kenny.

Former Lansdowne out half Tom Kiersey – one of five former Lansdowne players in the Old Wesley side – first reduced the margin and then put his side ahead with two well-struck penalties on 13 and 18 minutes as Lansdowne were penalised.

Indeed, the penalty count against the Headquarters side was heavy and this will be a matter of concern to Head Coach Mark McHugh. It is early days with the new laws, however, and this side will adapt quickly to the new interpretations.

Lansdowne restored their lead just before the first water break on 20 minutes when No. 8 Danny Kenny finished off some good forward play with a try. Out half Stephen Madigan added the extras for a 12-6 lead. Paddy Nixon then capitalised on a series of pick and goes to drive over for another well-worked forwards’ try as the home side took control.

Kiersey once again narrowed the gap with his third penalty before hooker Paddy Nixon barrelled over for the first of his two tries. With Madigan again goaling, Lansdowne entered the break with a comfortable 24 – 9 lead and the bonus point secured.

It has long been a contention of this scribe that a team is often better off not gaining a try bonus point before half time; this is based on the premise that the incentive to gain the bonus can help focus and better motivate a side for the second half.

With a 15-point lead, Lansdowne would have hoped to build upon their advantage after the break but instead, the visitors roared into life. The home side were forced to weather a storm which they did resolutely until ex-Lansdowne flanker Alastair Hoban dived over in the corner for a try awarded by the referee, although it appeared that the player was in touch before grounding the ball.

The try was not converted, but Kiersey quickly punished further Lansdowne transgressions with a penalty from in front of the posts to reduce the lead to 24-17.

Wesley, with young sub prop Sam Illo and captain Iain McGann to the fore up front, continued to press. The home cause wasn’t helped by the yellow card wielded to sub Ed O’Keeffe as Wesley really tested the home side’s resolve in defence.

While Lansdowne showed a lot of resilience, the Donnybrook men took advantage of Lansdowne’s depleted numbers to slip full back Michael Clune through for a try to narrow the gap to 2 points, 24 – 22.

Lansdowne’s line out had been superior throughout, and the home side regained their composure through a penalty line out to work sub-hooker Henry Godson, a prop on last season’s Under 20’s and son of former Lansdowne player Rory, over for a settling try.

There was still time for Old Wesley to cross the line again in injury time through hooker Ben Burns, but the day was Lansdowne’s.

The home side will be the better for this outing against a well-organised and disciplined Old Wesley side. They have things to work on, in particular their discipline, but this will come as players get used to one another and patterns of play become better understood.

Lansdowne are due to travel to St. Mary’s next weekend.