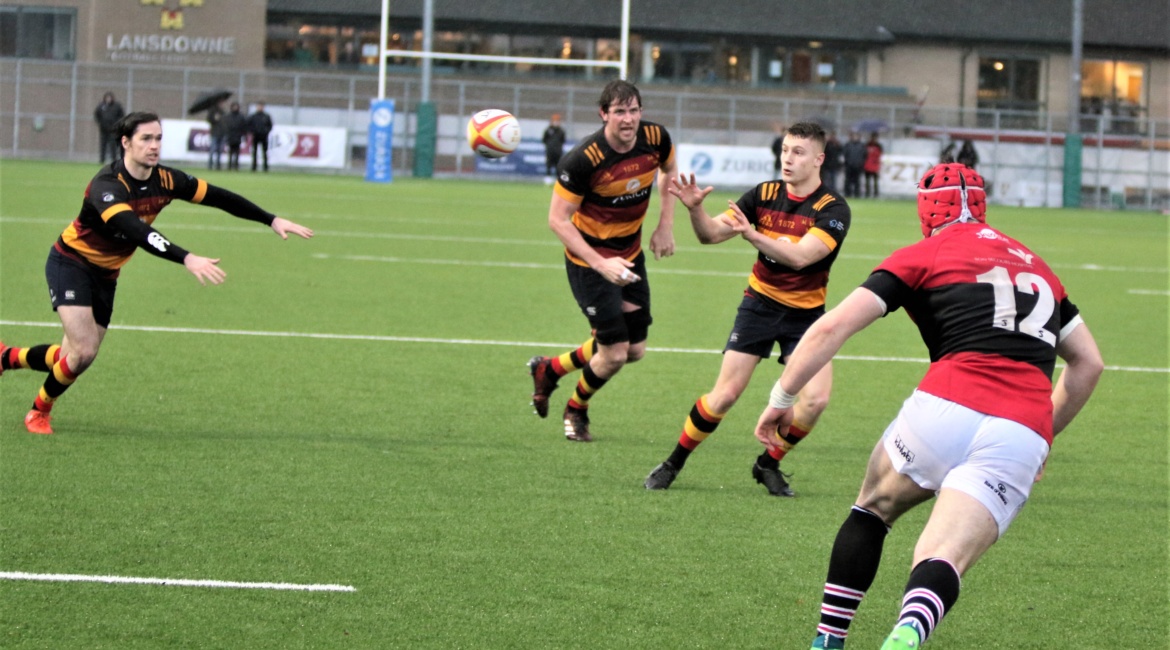 Lansdowne got the second half of their 2020 Energia AIL campaign off to a good start with a hard-fought victory against a lively UCC side last Saturday.

The score line in the reverse fixture in December in The Mardike was15 points to 14, as Lansdowne struck deep into injury to record the narrowest of victories against tenacious opponents.

Sub full back Tim Foley had scored the winning try in the Cork match; this time his well-struck conversion seized the lead and a precious four points as his side prevailed again by the narrowest of margins, this time by 19 points to 18.

Lansdowne had to do it the hard way, trailing by 10-0 after the first quarter and only gaining the lead for the first time in the 69th minute of a pulsating match between two very evenly matched sides.

Up front Lansdowne welcomed back hooker Dan Sheehan and flanker Mark Hernan after Leinster “A” duties, while winger Peter Sullivan and Harry Brennan returned in the backs.

UCC were also bolstered by the inclusion of Munster squad players Jack O’Sullivan (No. 8) and John Hodnett, who had originally been selected at No. 8 but was moved into the centre to counter the threat posed by Lansdowne’s returning former Connacht centre, Craig Ronaldson.

A steady downpour made the pitch greasy and, as in the first encounter between these two sides, the ball resembled the proverbial bar of soap. UCC adapted better to the conditions early on, as the home side’s ambitious efforts to move possession in the opening half were frustrated by the wet ball.

It was only when the Headquarters side began to adapt their play to the conditions, taking the ball on in driving mauls and kicking from the base that they began to reap any reward. In the meantime, the Students had capitalised on their opponents’ high error count to establish a 10-0 lead which, in the conditions, could have been a significant one.

Talented young UCC out half, James Taylor, did the initial damage, kicking a good penalty in the 7th minute. The Corkmen then repulsed a strong attack set up by centre Harry Brennan and assisted by promising No. 8 Darragh Murphy, who had a fine match, to strike with an attack of their own.

From a penalty line out in the home ’22, the Cork side mauled the ball to within a few metres of the Lansdowne line before the ball was spun right for Taylor to cross for a neatly-taken try which he also converted to establish that 10 point lead after 21 minutes.

This setback appeared to galvanise the Lansdowne pack, and they began to apply themselves with greater conviction, cutting down on the error rate as they began to adapt their game.

Lansdowne scored their first try after 27 minutes, following a brilliant kick deep into the visitors’ ’22 by out half Peter Hastie, which forced the Cork side to concede a 5 metre line out. Possession was mauled and recycled as the home pack pressed hard, Under 20 flanker Hernan finally emerging with the ball to score.

Young Hastie converted well, and Lansdowne were back in the match at 10-7 down.

Tim Foley came on at out half for the second period, with Hastie reverting to full back. Lansdowne immediately went on the attack, and two penalties in a row saw severe pressure building up on the UCC line.

The chance wasn’t capitalised on, however, as a crooked throw (there were remarkably few on both sides, given the slippery ball) gave relief to the students.

Lansdowne were then punished by Taylor for a high tackle; he goaled from 35 metres out to stretch the UCC lead to 5 points, 13-7.

Adam Boland came on for Greg McGrath at tight head, and the pack were immediately rewarded with a scrum penalty on half-way. Foley boomed the kick to within 12 metres of the visitors’ line. The line out maul was brilliantly executed and Dan Sheehan crossed for a valuable 5 pointer to bring his side within a point of the Corkmen at 13-12.

Lansdowne’s resurgence was halted by a clever line out play which saw the ball transferred immediately to the UCC captain, the impressive Ryan Murphy at No. 6. He surged towards the Lansdowne line and set up a ruck from which the ball was transferred left for sub back Killian Coghlan to score wide out. 18-12.

Lansdowne kept their composure, availing of a fortuitous penalty on half-way to set up a line out 12 metres from the UCC line. A 5 metre scrum ensued, and Lansdowne drove for the line. The always excellent Jack O’Sullivan then broke clear to muscle his way over to bring his side within a point.

From 15 metres in, Foley made no mistake in bisecting the posts with the convert and his side were ahead for the first time.

The Students’ number was up and, despite the referee finding 7 minutes injury time, most of the subsequent play took place around the UCC 10 metre line. The sound of the final whistle was nonetheless a welcome sound for Lansdowne ears, as they once again recorded the narrowest of wins over a talented UCC side.

Winger Peter O’Sullivan won Man of the Match for his industry and effort on a day that wasn’t made for the backs – one covering tackle, in particular, preventing a likely score. Mark Flanagan had a good game up front, along with prop Marty Mulhall, Sheehan, and an industrious back row in O’Sullivan, Hernan and O’Sullivan.