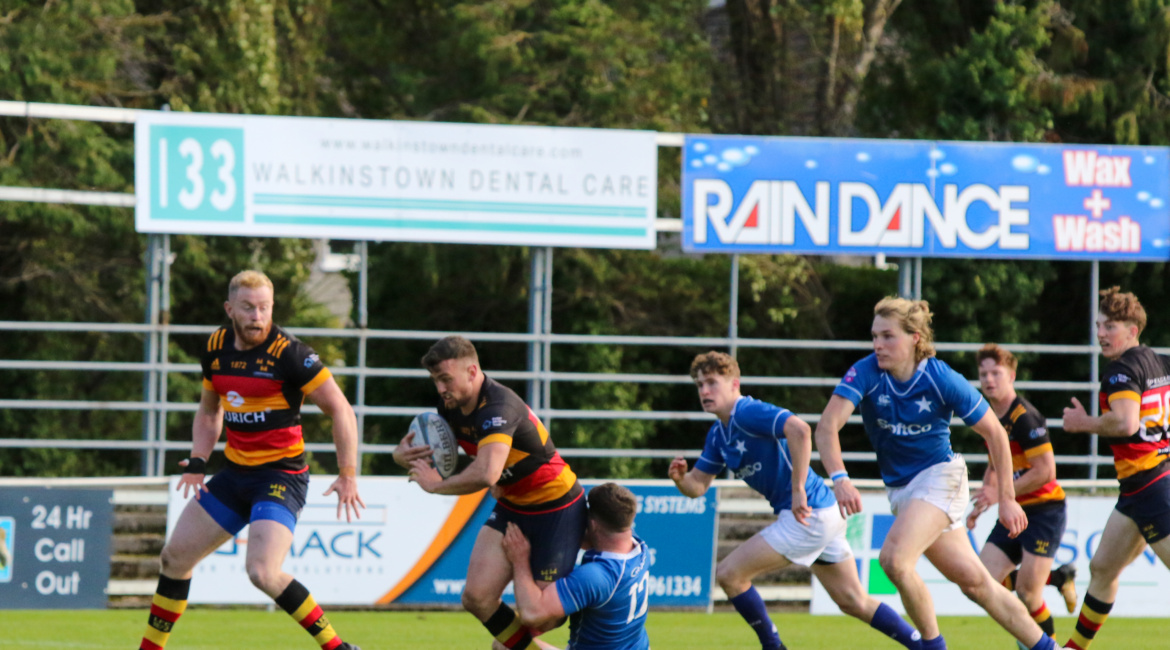 Lansdowne followed up on their sterling work in despatching Terenure College last weekend
with a rousing 41-15 victory over our other D6W neighbours, St. Mary’s College, last
Saturday.

The novelty of being able to attend live rugby again was reflected in a good-sized crowd, and
the occasion was helped by a mild, early-autumn day. Lansdowne enjoyed the favour of a
breeze blowing down the hill towards the road during the first half and duly took advantage
with a try under the posts by lively scrum half James Kenny following early pressure. The
score was converted by out half Peter Hastie for a seven-nil advantage in the 6 th minute.

The visitors continued to set the pace of the match, and a second try followed shortly
afterwards with Kenny again the instigator, launching a good break up the middle to link with his pacey right winger, Sean Galvin, who crossed beside the posts. Young Hastie again added the extras for a 14-0 lead after 10 minutes.

Two scores ahead, and Lansdowne were cruising. Or they were until they botched the restart
and a wild pass in defence was pounced upon by a vigilant St. Mary’s player as the home side had a score on the board in their first venture into the Lansdowne half.

Lansdowne weren’t rattled, however, and recovered quickly. Full back Eamonn Mills, who
consistently showed his class throughout, made a break in the 16 th minute and set up his
side’s third try, this time scored by left winger Ed O’Keeffe, a former Cookie. Hastie was
unable to convert this time, but the visitors still enjoyed a 19-5 lead after only 15 minutes’
play.

Lansdowne continued to dominate affairs but squandered a few well-created chances before
securing the bonus-point try from close in. This effort was scored by flanker Mark Boyle
which Hastie converted for a 26-5 lead at the interval.

Having lost centre Paul Kiernan to a yellow card for a deliberate knock-on in first half injury
time, Lansdowne lost focus a little after the interval. St. Mary’s enjoyed their best period of
the match but found it difficult to break down some resolute defence by the Headquarters
side. They were finally rewarded, however, by a second unconverted try from their hard-
working hooker on the hour to reduce the lead to 29-15.

St. Mary’s struck again on 73 minutes, and for a brief moment a flicker of hope must have
been raised in the hearts of the home supporters. This was quickly snuffed out, as the visitors shook off their torpor and moved up a gear, shrugging off the loss of loose head prop, Gorey man Frank Kavanagh.

Both sides made multiple substitutions, but it was definitely Lansdowne who came off the
stronger. A brilliant counter-ruck secured turn-over possession on the Mary’s 10-metre line in the 75 th minute, the ball was swept left and replacement scrum half Jack Matthews seized on the chance to cross for a well-taken try. Sub out half David Moran converted for 34-15.

There was still time for a sixth try, influential No. 8 Clive Ross crossing in the right-hand
corner for a captain’s effort (Club captain Jack O’Sullivan being injured on the day) which
rounded-off an excellent display on his part and set the seal on an emphatic 41 points to 15
victory.

Given everything that has transpired during the past 18 months or so, Mark McHugh, his
coaching team and the team management are to be commended for their work in keeping a
strong squad together, in particular with the loss of several players, in particular front row
forwards, to the professional game.

The squad which took the field against St. Mary’s was well organised, both in defence and
attack, and played in the finest spirit of the Lansdowne Club. They follow in the tradition of
great Lansdowne men such as Paul Inglis, Colm O’Shea, Donal McEvoy, Bill Cooper, Paul
Ledwith and Donal Ryan, all of whom have left us diminished with their sad passing in
recent times.

We also mourn the passing of a great Lady of Lansdowne, Sally Dawson, widow of the great
Jack Dawson and Mum of Michael, Geoff, Mark, John and Gillian. May they Rest in Peace.

The final match in Section 1B of the League will take place next Friday evening on the back
pitch against Trinity College at 7:30pm. The Club would appreciate your attendance as we
remember our fallen clubmates in our prayers.