Lansdowne Prove Too Strong For UCD 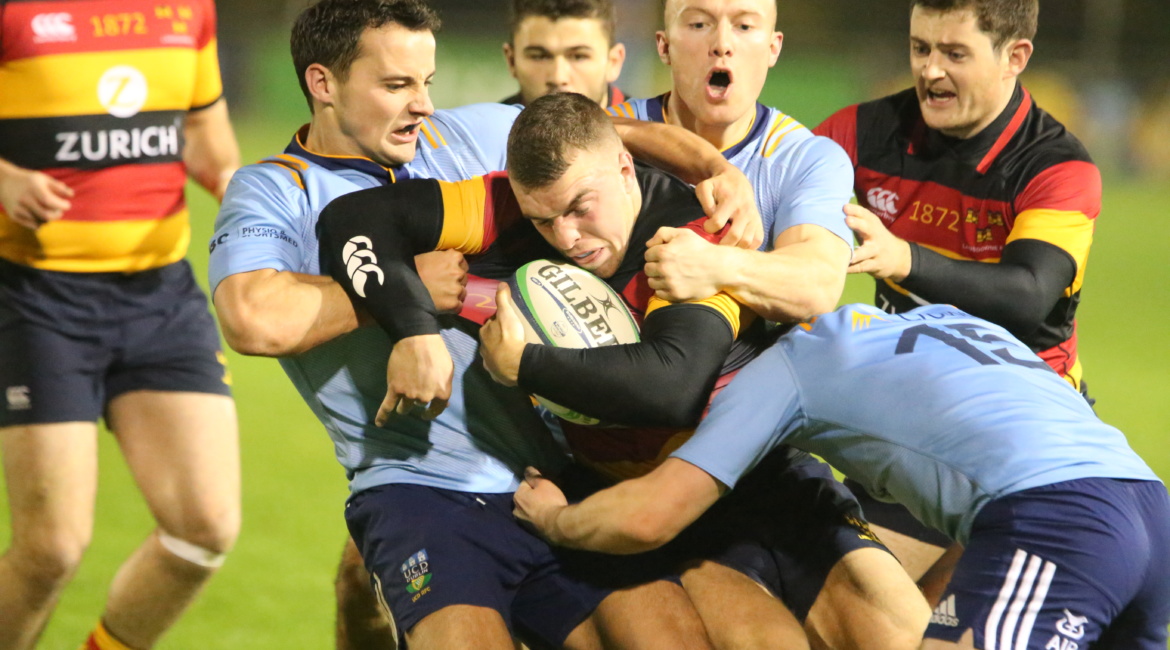 Seeking their first win in the competition this season, Lansdowne got off to a dream start with a try on the board within the first minute, courtesy of full back and captain Eamon Mills.

Many of the good-sized attendance hadn’t taken their places when, his forwards having fielded the kick-off, Lansdowne scrum half Tim Murphy launched an attack that saw winger Adam Leavy enter the line and create an overlap for Mills. The No. 15 was set free out wide and cruised over the line for an opening try before Collidge could draw their breaths.

Lansdowne continued to have the better of affairs, the home side’s cause not helped by poor handling which couldn’t all be put down to the heavy dew which fell on a cold, clear night under the Bowl floodlights.

Indeed, the amount of steam rising into the crisp night air at times was such that it obscured the forwards from the spectators’ view!

Lansdowne were superior in the tight and won several scrum penalties. From one of these, Deasy kicked deep into the UCD ’22, but the ball was knocked on and the chance passed. A similar ploy saw another penalty line out on 25 minutes and this time Murphy, who had his best game yet for the club on the night, made a quick break, setting up blind side winger Daniel McEvoy to collect the ball behind his back and cross unopposed for what was a relatively soft-conceded try.

Deasy again goaled, and the visitors had stretched into a 14-0 lead without having been, well, stretched.

There was an inevitable response from the Students, but they could only manage two well-struck penalties through full back Cillian Burke as they pressed to get back into the game. The Lansdowne defence was well-organised, and hooker Tyrone Moran, flankers Joe O’Brien and Aaron Conneely (despite shipping a knock), No. 8 Jack O’Sullivan and veteran second row Willie Earle all put in serious shifts in the defensive department.

The visitors were guilty of some dodgy defending after 37 minutes when they failed to clear their lines and were penalised. This led to a series of College attacks that were repulsed and, eventually, they were penalised for crossing. There was still time before the half for Lansdowne to win a line-out 30 metres out which was mauled closer; the ball was spun to centre Harry Brennan who, together with young Tom Roche formed a lively centre partnership, made a good thrust. The moment was lost when one of the Lansdowne forwards, showing more enthusiasm than judgement, dived over the top and conceded a penalty.

Lansdowne reached the break 14-6 ahead, and started the second period well, putting some good phases together. The were rewarded with a penalty after 45 minutes some 35 metres out which Deasy made easy work of for 17-6.

The error count continued to run high on both sides and, as a result, it was difficult for both sides to build up any real momentum or continuity. A further scrum penalty saw Deasy once again accurate off the tee from 38 metres as he gave his side a 14-point cushion with his tenth point of the night.

Lansdowne pressed again, and a scrum inside the Collidge ’22 on 73 minutes saw loose head Denis Coulson harshly penalised for not scrummaging straight when, in reality, he had his opposite number in all sorts of trouble and going backwards.

Lansdowne failed to capitalise on several chances and there was a bonus point there for the taking. A first win, in the side’s third match on the road however was a great tonic and will hopefully set them up for a good run in the coming weeks.

Giving his reaction afterwards to Irish Rugby TV, Lansdowne head coach Ruddock said: “A tough start for us with three away matches, so it was never going to be easy. A couple of fine margins in the first two. Tonight I thought we were very comfortable.

“We had control of the football, control of the tempo of the game. We dictated matters because of it and then UCD, as we know, are a very skillful team so it was important we close them down when they had the ball and I thought we did that really well.

“I thought the referee was excellent, very consistent for both teams. That made for a good game even though I thought we dictated matters and were comfortable winners, if not so much on the scoreboard in terms of territory and the way the game was played out.”