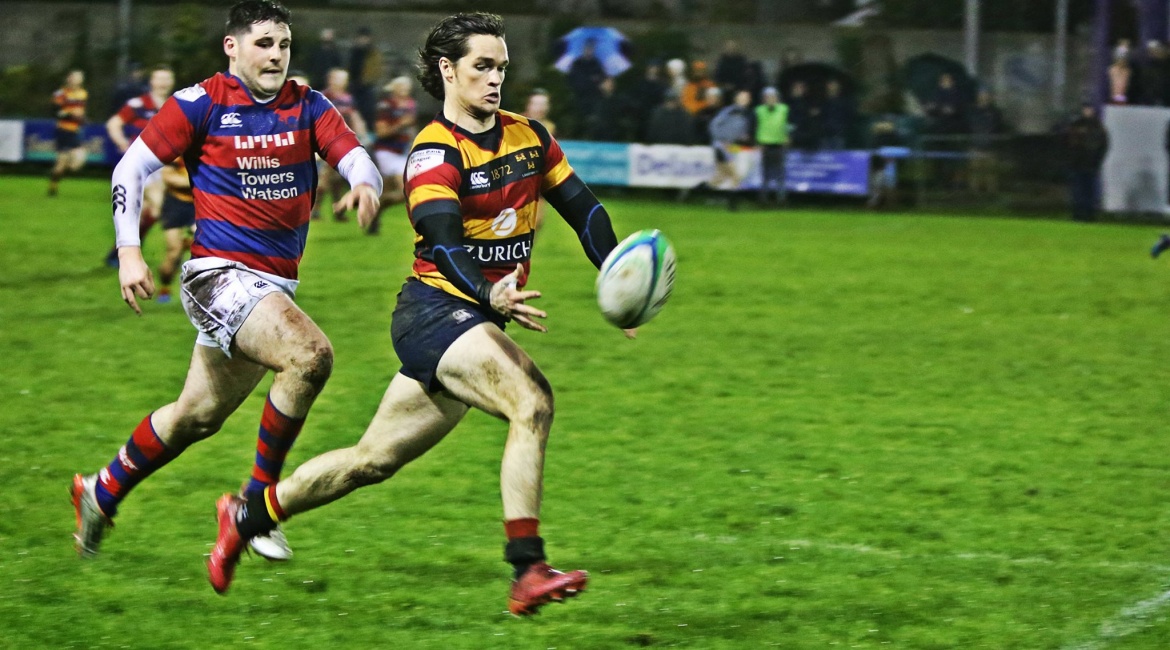 Round 7 of the Ulster Bank AIL saw Lansdowne make the short trip across the Liffey to Castle Avenue, where the current League leaders took on Clontarf, last season’s runner’s up in the competition.

So it was first against third on a wet night on the Northside, with the rain getting heavier as the evening progressed, the greasy ball making handling conditions very difficult and reducing scoring chances to a minimum.

The match also doubled up as the final of the Leinster Senior League Trophy. As the winners, Lansdowne will now have the honour of representing Leinster in the semi-final of the Bateman Cup, a trophy last won by the club in 1931. In addition, Club President Michael Cassidy had the considerable pleasure of accepting Lansdowne’s 153rd Leinster Branch trophy from Niall Rynne, this season’s President for the Leinster Branch.

But your writer is getting ahead of himself. Firstly, a competitive match had to be played against a strong and committed Clontarf side that fielded one of the biggest packs ever seen in the AIL competition.

The wet, wintry conditions were always going to militate against an open game, and the tight exchanges were a critical battlefield in determining the outcome. The Lansdowne front row of Peter Dooley, Tyrone Moran and Captain Ian Prendiville set about their opponents from the off, winning a penalty in the first scrum and establishing a platform that got stronger as the game progressed.

Out half Scott Deasy struck the penalty kick beautifully from 38 metres and the visitors had their noses in front with just three minutes on the clock. The restart was spilled, however, and Clontarf responded by applying pressure to the Lansdowne defence, which was magnificent all evening.

With the ball a liability at times, kicking was the order of the day. Lansdowne full back Eamonn Mills put on an exhibition of the highest order in his defensive duties. A rock of solidity under the high ball, he was ably supported by his wingers, Dan McEvoy and Ian Fitzpatrick in keeping errors to the minimum.

Playing up the slight Castle Avenue gradient, the Northsiders had marginally the better of the earlier exchanges. Their momentum was disrupted, however, by the sin-binning of 2nd row Cormac Daly on 21 minutes after the touch judge on the far side of the pitch intervened.

Lansdowne had their chances during the first period, but a lost line out in a very promising position frustrated the visitor’s efforts, while the referee failed to take any action when a Lansdowne driving line-out maul close to the line was taken down by the home defenders.

Clontarf also had several attacking efforts, but were met with solid defence in the form of Deasy and centres Mark O’Keeffe and Harry Brennan, while the back row of Jack O’Sullivan, Charlie Butterworth and No. 8 Willie Earle were tireless in their efforts and put in a huge work rate.

Lansdowne grew more into the half as it went on, and their backs always looked the livelier of the two combinations, showing greater pace and variety in attack as Deasy ran the show superbly. It was from one for these attacks that he made a break and fed Mills who, unfortunately slipped. However, Lansdowne won a subsequent penalty 23 metres out almost on the stroke of half time which the out half again struck crisply for a 6-0 half time lead.

With Clontarf playing in their favoured direction in the second half, the home supporters anticipated a second-half onslaught. Instead, it was Lansdowne, once again proving their stamina in the third quarter, who took the match to the home side. Jack Dwan, who shook off an early knock and Josh O’Rourke, a late replacement for Oisin Dowling in the 2nd row, got through a ton of good work and were ably assisted by replacement Aaron Conneely, who made several entries into the fray as the rolling subs rule was used to good effect.

Daniel McEvoy broke free onto a chip through after 48 minutes but was caught just when it looked like he might break the deadlock. ‘Tarf were penalised in the subsequent ruck and once again the sure-footed Deasy made them pay the price, goaling for a 9-0 lead.

Lansdowne’s tremendous forward effort continued, and, in truth, they should have scored on at least two occasions following several series of pick-and goes on the home side’s line. The referee twice penalised Lansdowne on the Clontarf line during the second half and, in general, tended to favour the defending side. Lansdowne continued to dominate the match territorially and absorbed the best the home team could throw at them.

Lansdowne emptied the bench, and Kelleher, Boland, Conneely, Alan Bennie and Adam Leavy all made solid contributions as Lansdowne ran out deserving winners and became holders of the Leinster Division 1 League trophy for the first time. An excellent result in which every member of the squad contributed to the cause and deprived the home side of even a losing bonus point.

Seven wins from seven starts sees Lansdowne top of the log, 6 points clear of Terenure, who visit Headquarters for a Friday night game on 24th November. Why not gather up a few of the mates and book in for the pre-match dinner at 6:00pm? You can enjoy what promises to be a great top-of-the-table clash against our rivals from Dublin 6W!!