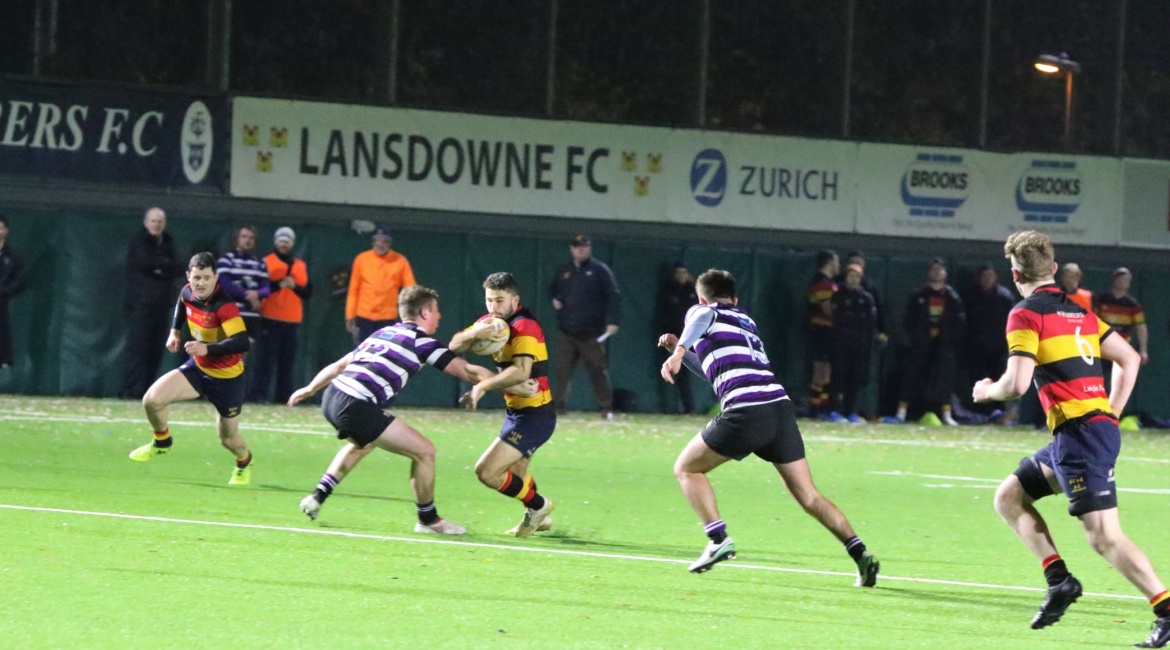 Lansdowne continued their rich vein of current form last Friday night on the Aviva back pitch when dismissing the challenge of Terenure RFC to record their fourth win on the bounce in Division 1A of the AIL.

A first half played at pace and with power simply blew the D6 visitors away, and a 31-points to nil lead at the half way stage made sure the match was over as a contest and the try bonus point assured.

Lansdowne made light of missing several players, in particular up front where Willie Earle and David O’Connor moved from the back to the second row. The visitors also struggled to field their selected side, having to make no less than four changes as well as introducing an entirely new bench.

And it showed. Lansdowne played into the chill breeze in the opening half, but they failed to capitalise on early pressure when centre Harry Brennan made a nice break only to hold on when a pass might have been the better option. The Headquarters side were also penalised at a five metre scrum as a great opportunity went a-begging.

Terenure lifted the early siege, but a break-out from their own ’22 led by scrum half Tim Murphy setting up strong-running left winger Peter Sullivan for the opening try. Scott Deasy landed a fine conversion from wide out on the left to put the home side 7-0 ahead in the 14th minute.

Lansdowne continued to dominate proceedings, and a first half penalty count of 8-2 helped ensure that the match was largely played in Terenure’s half. The visitors fought gamely, but it was evident Lansdowne held the whip hand and their back row and backline, in particular, held a distinct edge over their opponents.

Lansdowne’s second try in the 25th minute came from a line out on their own 10 metre line. Winger Mark O’Keeffe, who had a fine match, came in off a Scott Deasy pass to make the initial thrust up the middle. He drew the last man to send centre Brennan away for a neatly worked try which Deasy was unable to convert.

From a further penalty on 32 minutes the Lansdowne pack, having failed to capitalise on a similar chance a few minutes earlier, finally got their penalty line-out maul working and hooker Tyrone Moran surged over the line as the visitor’s defence crumbled. Scott Deasy was sure-footed with the conversion, and Lansdowne had forged into a 19-point lead.

This was soon turned into 24 when, following a further penalty line out, the Lansdowne pack, with Jack O’Sullivan and flanker Joe O’Brien prominent, set up a series of pick and go drives to which the Terenure forwards simply had no answer. The pressure told, and O’Brien crossed from close in to extend the lead and secure the try bonus point.

There was still time for more; No. 8 O’Sullivan placing a clever chip over the top which Harry Brennan took on the full to race clear for try No. 5 in first half injury time. This firmly established an unassailable 31-0 lead at the break.

Lansdowne moved further ahead on 43 minutes when skipper Mills broke out of the home ’22 and passed to scrum half Tim Murphy.  Murphy returned the compliment and Mills raced away for his second try of the evening and fifth of the campaign as the lead stretched to 36-0.

Terenure are renowned for their fighting spirit, and they duly responded in the second half as they upped their efforts considerably. In fact, they won the second half by 12 points to 10 as Lansdowne understandably became a bit complacent and sat back a little. The visitors had their first points on the board when they were rewarded with a dodgy penalty try given when Mills was judged to have battened down a pass close to the line.

Mills was yellow-carded for the alleged offence, and the Lansdowne performance levels continued to drop in his absence. The bench was emptied, and the ship steadied. Jack O’Sullivan, who otherwise had a great game, will be disappointed with the forward pass which saw a gilt-edge try chance spurned, but a further yellow card given to replacement flanker Tom Murphy disrupted the Lansdowne momentum.

It is indeed frustrating that the referee didn’t issue any yellow cards when Terenure were conceding first-half penalties but did so as soon as Lansdowne transgressed during the second period.

There was still time for replacement winger Daniel McEvoy to cross for a neatly-worked try off a scrum in the 78th minute for Lansdowne’s seventh try and a 41-7 lead. Battling Terenure had the last say, however, as their lively full back, Matthew Byrne, crossed in the third minute of injury time for an unconverted consolation effort.