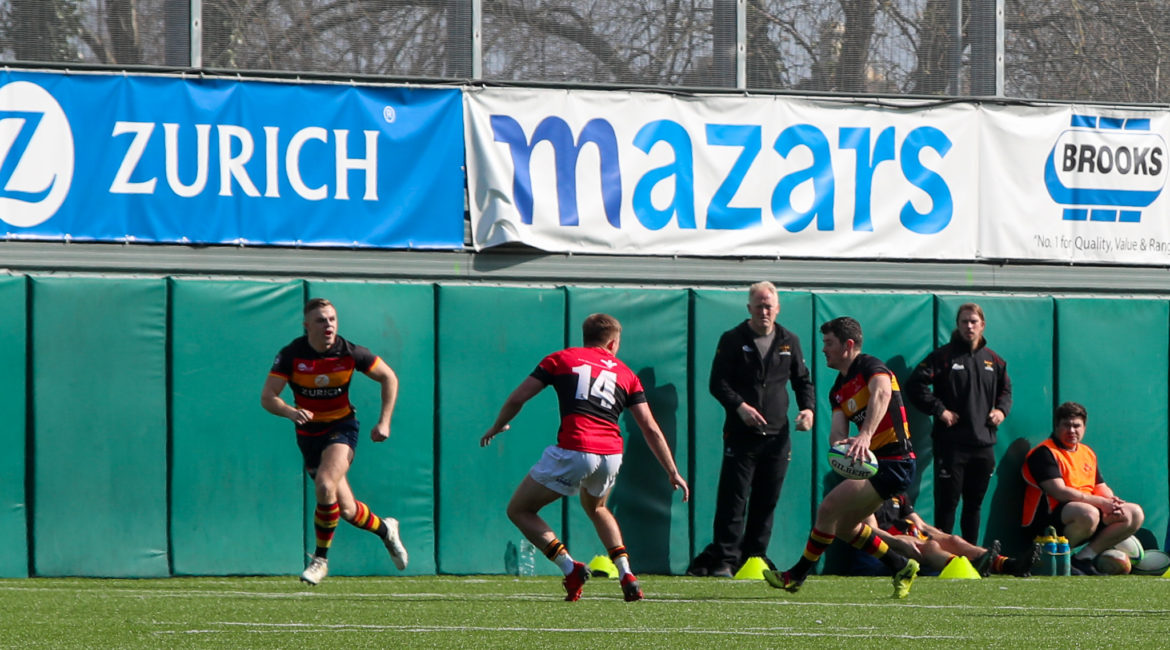 Lansdowne recorded a comfortable victory in the latest round of the Energia- sponsored All Ireland League with a comfortable win against a young UCC side, who had seven Under 20’s in their starting side, at a sun-dappled Lansdowne Road on Sunday.

Moved from the Saturday due to the soccer international against Belgium, Lansdowne duly cemented their place in the League play-offs against the Students, who are destined for a relegation play-off with Ballynahinch.

Coming off two losses in succession, the home side were keen to restore their winning ways. Their cause wasn’t helped by a great start by UCC, however; a quick break by their lively scrum half, Louis Khan, leading to a penalty on the home ’22.

Opting for the line-out, the Cork men drove well, and hooker Tadgh McCarthy did the necessary from the back of the maul. Centre Daniel Squires added the extras and the visitors were unexpectedly 7 points up after only three minutes’ play.

Lansdowne regrouped and went on the attack and a penalty saw them set up camp in the College ’22. Following several surges against the Students’ defence, second row Dan Murphy powered his way over for the Headquarter’s side’s opening try in the eight minute. Out half Stephen Madigan, who played well, converted from the side line and the sides were level at 7-apiece.

But not for long. A surge down the left by winger Sean Galvin was recycled and followed by a break from that most influential centre, Paul Kiernan, who combined with winger Michael Silvester to set full back Eamonn Mills away down the right. The Cork man needed no second invitation and he finished off from 22 metres out for the first of his brace of tries on the afternoon after 11 minutes.

Lansdowne turned up the pressure and opted for a series of scrums when awarded penalties. This led to the replacement of the UCC tight head as they struggled. Replacement Corey Hanlon came on and turned the tide, winning a relieving penalty for his side as the home side for once buckled!

Lansdowne’s pressure inevitable took its toll, a turn-over line out setting the excellent Clive Ross up for a burst which almost brought him to the line before the ball was again spun right. An electric burst of pace from winger Michael Silvester then saw him make the line and establish a 17-points to 7 lead after 25 minutes.

Lansdowne were now making hay in the sunshine and piling pressure on the beleaguered Students. Clive Ross stole a line-out, the ball was again moved wide to the right by the ever-threatening Kiernan who again feed Mills. The full back broke through the covering defence and slalomed over for his second try of the afternoon.

If the Lansdowne lineout was poor in the corresponding fixture in the Mardyke last October, it was spot-on on this occasion, Luke Thompson’s arrows flying straight and true as Lansdowne lorded it in the lineouts.

The try was converted by Madigan, and Lansdowne had the try bonus point stitched up by the 33rd minute of the game.

There was still time for more before the interval, with James Reynolds, on for the injured Silvester, set away (again by the ubiquitous Kiernan) to cross for his side’s fifth try of the half. Stephen Madigan was up to the task with the difficult conversion and Lansdowne were well set at 31 points to 7 at the break.

This writer always thinks it is difficult for a team to motivate itself in a second half when the maximum points are already stashed away in the locker. A second try-bonus point for scoring 7 or 8 tries would help keep winning teams focused?

Lansdowne did go off the boil somewhat after the interval but were always quite comfortable. They increased their lead with a slick line-out play that saw burly prop Frank Kavanagh power his way over the line on 54 minutes. Madigan again struck a sweet conversion from the touch line. 38-7.

Similar to the October Mardyke game, the match was played at a high tempo, with both sides seeking  to move the ball at every chance. UCC narrowed the gap with a second mauled try in the 59th minute from replacement hooker Billy Kingston, which was converted by winger George Coomber. 38-14.

With Lansdowne second row Ruairi Clarke in the sin bin for batting down a pass, where he was joined only moments later by UCC No. 8 Jack Kelleher for a similar offence as referee Glen Sheridan (who had a fine match) showed his consistency.

It was good, entertaining stuff, but by this stage the urgency had gone out of the contest. Lansdowne emptied the bench, with Adam “Teddy” Boland coming on to make life very difficult for the Students’ front row as he engineered a series of scrum penalties.

Andy Marks also came on and made an impression, following his fellow centre Corey Reid (intercept) across the whitewash for Lansdowne’s seventh and eight tries as UCC tried to play catch up rugby just once too often.

Fittingly, as they had never thrown in the towel, it was the men from the Mardyke who had the last word, crossing for a third mauled try in the third minute of injury time as Kingston scored his second of the afternoon and Comber converted neatly to give a final score line of 52-21 to the Headquarters side.

Lansdowne reclaimed their place at second in the Table, with everything to play for in their last two matches, at home to Terenure (third) and away to Cork Con (fourth).

Two very tough matches in prospect, the first against Terenure next Saturday at home on the back pitch at 2:30pm in a match which may well determine who gets home advantage in the semi-final.

Your support has never been needed more!