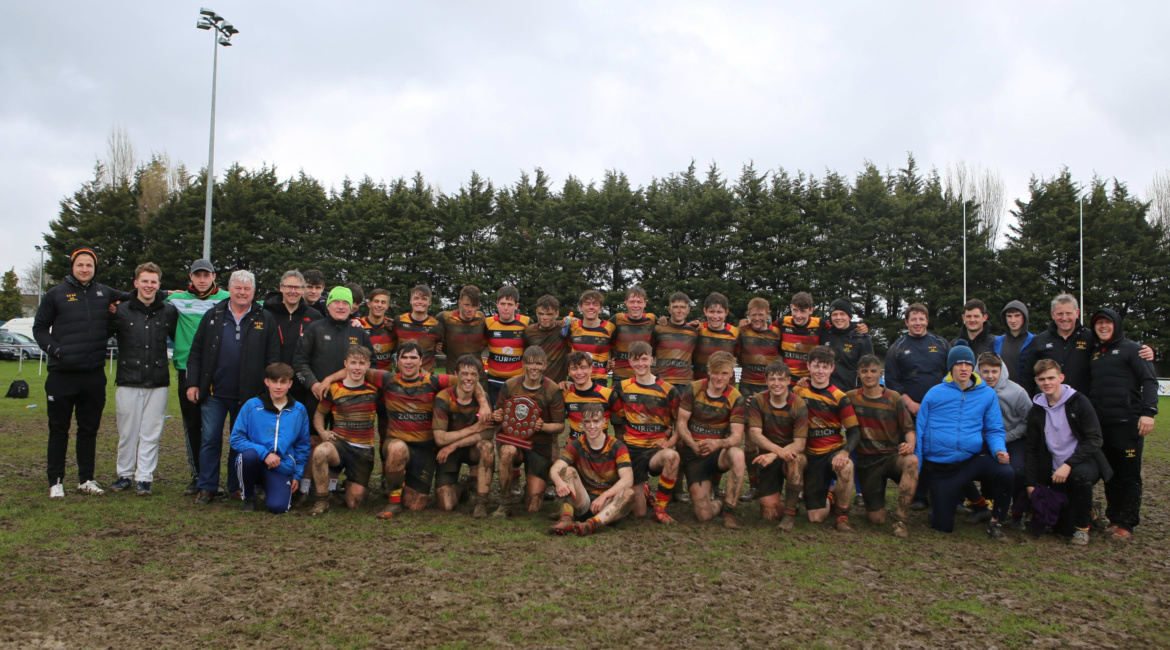 On a rain sodden pitch in Templeville Road the Lansdowne U17 team overcame a spirited Greystones team to claim the Leinster Premier League for the 2017/18 season.

The appalling conditions made it impossible to play a more open expansive type of game that both teams would have preferred but that didn’t stop two skillful squads from varying their tactics.

Greystones, with a strong wind to their backs, were first off the scoreboard and led 3-0 until they were penalised for a succession of infringements. Lansdowne’s No 10, Harry Colbert, managed to kick three penalties to take Lansdowne to a 9-3 lead at half time. Special note to the ability of Colbert to kick three penalties in what can only be described as a kicker’s worst nightmare – treacherous and slippery underfoot. Not only that, Lansdowne’s No 9, Hugo Mulligan box kicked very cleverly and again, with such slippery conditions, he still slipped clean passes to his pack and backs.

Greystones started the second half knowing that they had to take the game to Lansdowne and despite several attempts, stout Lansdowne defence kept Greystones at bay. The pack to a man were not for bending; Ronan Shaw, Kyle Donnelly, John Barry, Jonathan Dillon, Matthew O’Farrell, Ethan Lynch, Dylan Ryan and captain Luc Van Cauwelaert made tackle and tackle and forced several key turnovers in early in the second half.

Thereafter the game changed; Greystones were pinged for a series of infringements, two kickable penalties and Colbert converted one of them and took Lansdowne to a 12-3 lead.

Greystones were now in need of two scores and then a pivotal moment in the game saw one of their forwards carded for dangerous play in the line out. Reduced to 14, the pressure on Greystones began to show.

Lansdowne nearly poached an interception but could not hold on to the ball. Greystones were still competing and showed no signs of giving up the chase. The game moved to the last 5 minutes and as Greystones attempted to move the ball through the centre, up stepped Senan O’Shea to nail the perfect intercept and he sprinted unchallenged to score under the posts. An easy conversion moved Lansdowne to a 19-3 lead which they were not to relinquish.

Thanks to the hosts St Mary’s for allowing us to play the final on their main pitch; the terrible weather took its toll on the pitch and we are indebted to St Mary’s for their hospitality both before and after the game.

Thanks also to Niall Rynne, Leinster President for presenting the winner’s shield and medals. In his address Niall referenced the input of the Lansdowne senior players and he made specific reference to how important this was to promote and cultivate the next generation of players for Lansdowne and Irish rugby. So, a big thanks to club captain Ian Prendiville, Eamonn Mills and Alan Bennie for giving up their time to work with  our U17 squad – Leinster Premier League Champions 2018.