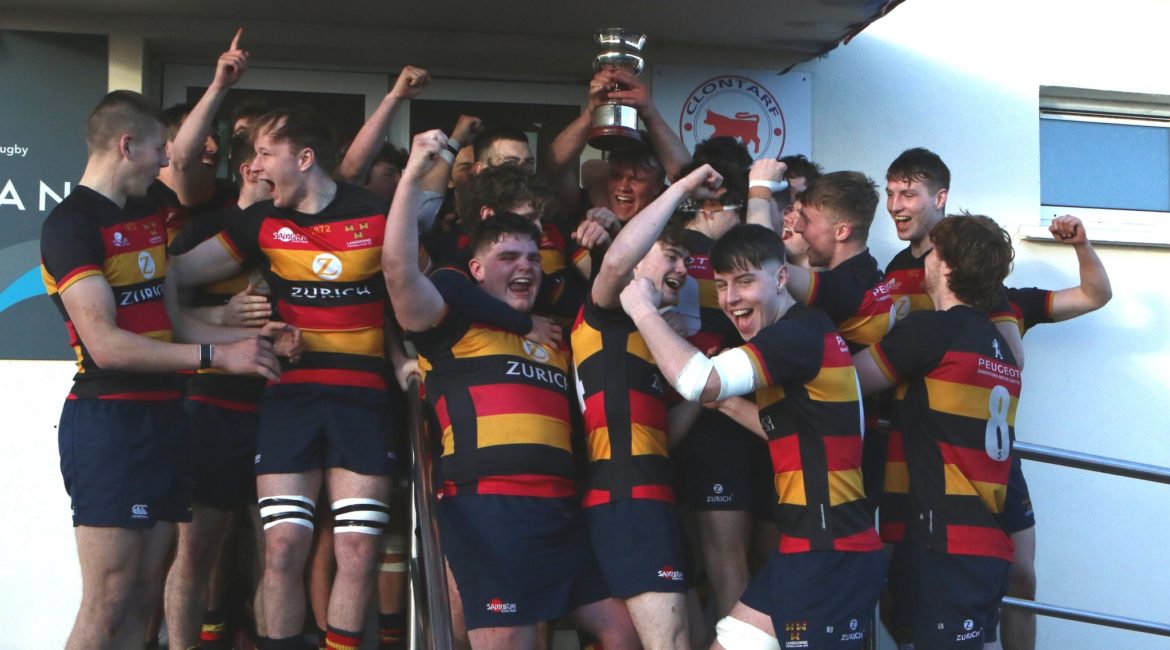 Needing 2 points to clinch the title from close rivals Old Belvedere, Lansdowne knew that an improving Clontarf side would not make things easy for them.

Clontarf started well and were duly awarded an easy 3 points from a penalty to take the lead. But our U20s responded when a penalty to touch resulted in a quick maul and a try from flanker Ciaran McCarrick, converted by Sam Prendergast. Lansdowne were imposing themselves now and after a quick ruck, spun the ball out left for centre Tom Gavigan to go in for Lansdowne’s 2nd try.  Our 20s indiscipline then allowed Tarf to kick for touch and from the maul, they whipped it out left to score in the corner to leave the score 19-8

What happened next was sheer magic. From a box kick, full back Cathal Eddy fielded inside his own half and took off with blistering pace, evading 4 tackles, before off-loading to centre Jamie McNulty for a magnificent try, converted by Sam Prendergast.  Things were looking good now for the 20s, with their line out functioning well, and it got better, when, after another penalty, they kicked again into the corner. This time a perfectly executed trick play from the training ground gave 2nd row  Luke Callinan a clear run from the front of the lineout for a smart try, again well converted by Sam Prendergast.

So with a commanding lead of 26-8 at half time  Lansdowne appeared to be comfortable, or so we thought, for Tarf stormed back into the game. From another penalty they worked the ball out wide on the right to score in the corner. Again indiscipline was costing Lansdowne dearly and with Tarf pounding our line with penalty after penalty, referee David Williams lost patience and handed out 2 quick yellow cards to Lansdowne forwards Not surprisingly Tarf scored from a maul through their impressive hooker, Barry Gray to narrow the gap to just  6 points and  Lansdowne now having only 13 players on the pitch. So, squeaky bum time. However, from the restart, Clontarf could not clear their lines and from a quick turnover captain Steven Walshe barrelled his way over to restore the 20s  lead. Lansdowne then defended marvelously holding up 2 scrums on their line and holding out until they were back to full strength. The 20s rounded up the scoring when an astute Steven Walshe pounced on the ball over the Tarf line to score the last try.

So with 13 wins from 14 games Lansdowne retain the JP Fanagan  Premier 1 League trophy, a trophy they have now won 4 times in the last 5 seasons.

Next up is a McCorry Cup tie versus UCD in the Bowl next Sunday. Hope to see you there.