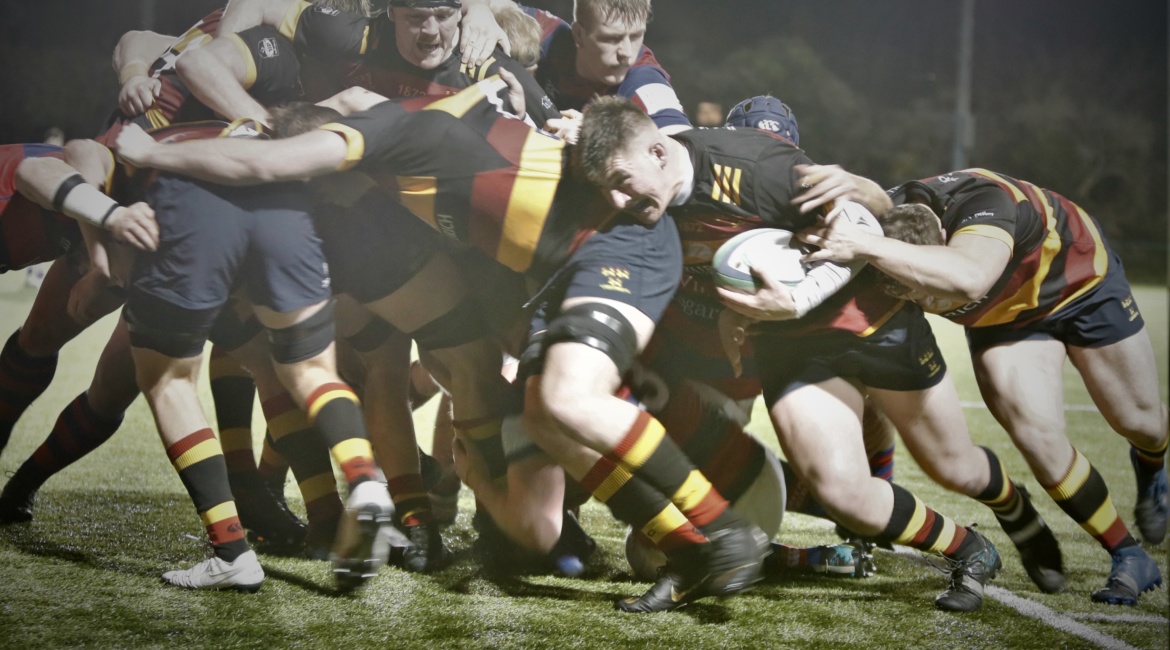 A challenging Friday night trip across the Liffey to play Clontarf under lights was justly rewarded by a much-improved Lansdowne performance which saw them run out worthy winners by a 23-19 margin.

Conditions were dry and were well-suited to attacking rugby.

Down 12-3 at the break, having played against a slight breeze, a stunning 20 points without reply saw the Headquarters side gain a much-need win and a subsequent move off the bottom of the Energia League Division 1A table.

Clontarf had slightly the better of a keenly-contested first half, with full back Sean Kearns punishing the visitors for early transgressions with penalties in the 2nd, 9th and 13th minutes – the last of which he boomed over from the half-way line.

Lansdowne were defending well, however, and their line was seldom threatened. Slowly they began to establish parity up front and were rewarded with a penalty of their own, converted by young tyro out half Harry Byrne after 24 minutes.

Young Byrne was the pick of the backs on display and kicked 5 from 6 for a 13-point tally. More importantly, Byrne varied his game well and his booming kicks were important in establishing good field position as the game went on.

‘Tarf re-established their 9-point advantage with a further penalty after 24 minutes, but this was to be the home side’s last points until four minutes into injury time at the end of the match when the result was already determined.

12-3 down at the break, Lansdowne recovered their former third-quarter good form and attacked the Northsiders from the off. Surprisingly, Clontarf seemed to fall off the contest up front as the visitor’s pack began to assert themselves, with hooker Dan Sheehan, prop Greg McGrath, returning flanker Joe O’Brien and captain Jack Dwan in the van.

Lansdowne began to dominate territorially, facilitated by the 8 second-half penalties conceded by the home side as Byrne took advantage to pin them back in their own half. The visitors began to spread the ball well in the backs, with returning winger Mark O’Keeffe and his counterpart on the left, Peter Sullivan, running strongly.

Eamonn Mills had his usual reliable game at full back and was threatening with ball in hand on the counter-attack, while centres Barry Goulding and Harry Brennan shored up the midfield well.

15 minutes into the second period, after several penalty line-outs and pick and go assaults on the ‘Tarf line, it appeared the home side had relieved the siege when they won a turn-over beneath their own posts.

Pressure tells, however, and scrum half Andrew Feeney, who otherwise had a fine match, threw a pass that hit his out half on the leg behind the goal line. The ball spun loose, and first to react was Ireland Under 19 flanker Mark Hernan, a late replacement for Joey Szpara, who took full advantage of his chance to ground the ball for an opportunistic try.

Byrne added the extras, and Lansdowne were back in the match at 12 points to 10 down.

Scenting blood, the Headquarters side immediately returned to the attack. Another penalty saw a line out in the home ’22. The ball was mauled several times into a position under the Clontarf posts, where prop Marty Mulhall plunged over on the hour to put his side ahead for the first time.

Harry Byrne again converted, and suddenly Lansdowne were 17-12 ahead and their tails were up. Clontarf’s task wasn’t helped by a yellow carding and Lansdowne took advantage with two penalties, both dexterously kicked by Byrne in the 70th and 72nd minutes to stretch their lead out to 23-12.

Clontarf did their best to rally, but Lansdowne were not to be denied, defending stoutly until the 5th minute of injury time when veteran second row Ben Reilly crashed through the visitor’s defence for a consolation try and a losing bonus point.

But the night belonged to Lansdowne and the trip back across the Liffey was made all the sweeter with the scent of victory against our Northside rivals in the air.

Afterwards, backs coach Mark McHugh was a relieved man and paid tribute to the way the players had responded during the period since the last match against Young Munster.

Hopefully, a corner has now been turned and we look forward with anticipation to the visit of Terenure to the Aviva next Saturday.

The Club Christmas lunch is on before the match – let’s see you all there and supporting your team!