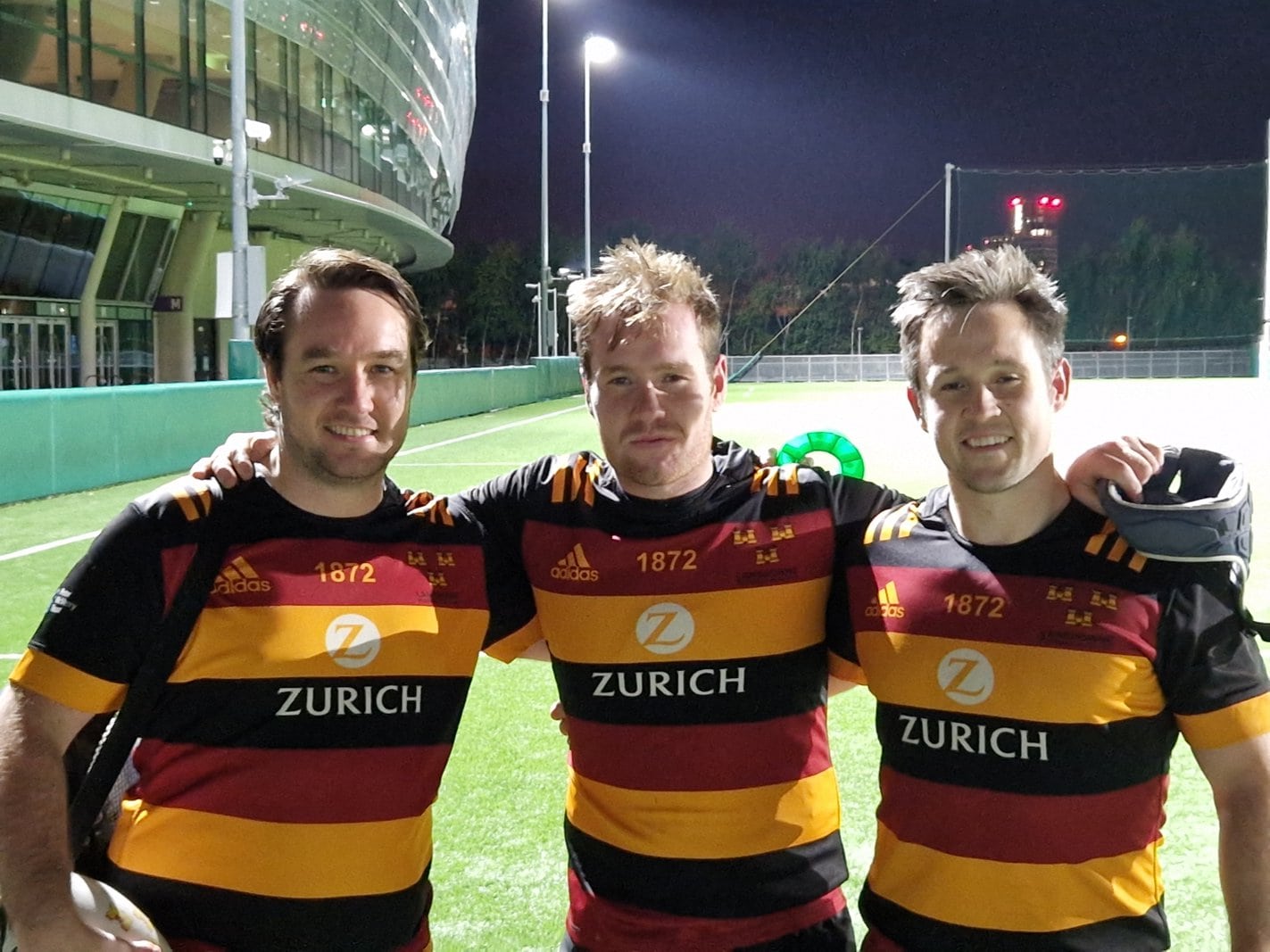 The J2 League season of the 150th anniversary year opened with a tantalizing encounter, as the finalists of the last two Albert O’Connell Cups locked horns again. In the recent cup encounters the score is one a piece, but in the leagues Old Wesley have consistently had the upper hand … and so it was tonight. Full marks to the visitors, they brought a largely unchanged team to HQ and their shape, discipline and well-balanced forces contained most of our frequently excellent attacks and punished our mistakes with ruthless efficiency.  The score line might flatter them a little, but they were well worth the victory.

There were several positives to take away, and one was the tempo with which Rob Kelly’s charges started the game.  The opening period was an intense flurry of vigorous defence, with Rob Hughes, Rory O’Donnell and Bill MacNamara putting in some powerful tackles. And our line breaks were strong as well, but Wesley are a seasoned unit, and no sooner had we punched a hole in their defences than another player was back on his feet to cover. Their counterattack and line running were equally impressive and it was after a rare lapse in our concentration that one of their lightening fast wingers received an offload and went over for their first try against the run of play. They missed the conversion and a few minutes later Will McEvoy slotted over a penalty to narrow the gap. The score line after an exhilarating first quarter was 3 – 5.

Special mention for our scrums and set pieces. In the first 20 minutes, we dominated their scrum with experienced tight head Paddy Butler, showing heroic novice on the loose side, Brandon Roberts how to deal with much bigger opposite numbers. Our line breaks were also hugely encouraging with Rory O’Donnell and Conor Horan working hard to make valuable meters.

In the second quarter, our discipline started to wobble, and we conceded a number of penalties in succession. Wesley took advantage of one with a long-range penalty bringing it to 3 – 8, when another penalty also brought with it a yellow card for the home side.  This spelled trouble for us in what was a very tightly fought struggle and sure enough Wesley punished us with a textbook try. We defended heroically with just 14 men after that against a now more adventurous Old Welsey, but they couldn’t penetrate. And we were just centimeters from their line – Paddy Butler again peppering for action – as the half drew to a close so we were confident we could narrow the gap in the second period when we went into the break just 3 – 15.

But the second half couldn’t have got off to a worse start. We conceded a senseless penalty from the kick out and they put the ball into the corner for a lineout, which they won, rolling their maul over our line, like a Panzer Division advancing unmolested towards the Maginot line. 3 – 20.

But we weren’t finished … not by a long way.  We worked our way back to their half with half backs Will McEvoy and Rob Kelly kicking intelligently into space to gain some valuable territory. And it was from one such strong attacking position that the crowd that had gathered were rewarded to witness a thing of beauty. Described by one sideline sage as “the sweetest try I’ve ever seen in junior rugby”, we can’t reveal the details of the move for competitive reasons but suffice to say that Andrew McEvoy anointed his return to Lansdowne by taking a sublime pass from Cathal Boyle to finish off a move the Kirov Ballet would have been proud of.  10 – 20 and with Old Wesley now attracting the wrath of the ref, the tide seemed to be turning.

But that’s where they get you.  We were playing all the rugby, both intelligent application of the playbook with some dizzying improvisation, but we were chasing the game and so gaps did appear. In spite of us having 70% possession and territorial advantage, the canny visitors counter attacked and pinned us back on our own line, putting us to the sword again with another try. 10 – 27.

But in a serious portent of the great things to come from this side, we finished on a high, with our fitness, discipline and style completely outshining the visitors in the last quarter. The ref finally lost patience with Wesley’s consistent offences and they were yellow carded. With a man down their defences couldn’t withstand our unwavering attacks and sure enough our courage and tenacity were rewarded with another magnificent try. This time Andrew McEvoy was the one who made the line break and offloaded the ball to someone else to score: the grateful recipient being Peter Fitzgerald.

With the score line now 17 -34 the game was over, but an exhausted Wesley opted to kick a last-minute penalty, bringing to final score to 17 – 37.

Wesley are still the Gold Standard in this league and maybe it was a pity we met them in our first game, before we could iron out the handful of mistakes for which they made us pay so cruelly. But there was an awful lot of comfort to take from this team’s performance and a lot to look forward to for the rest of the season.

One more landmark was the fact that for half of the game we had the privilege of watching three brothers from a great Lansdowne family proudly representing the club. Take a bow, Will, Alex and Andrew McEvoy!