Tough Win In Lakelands Makes It 12 From 12 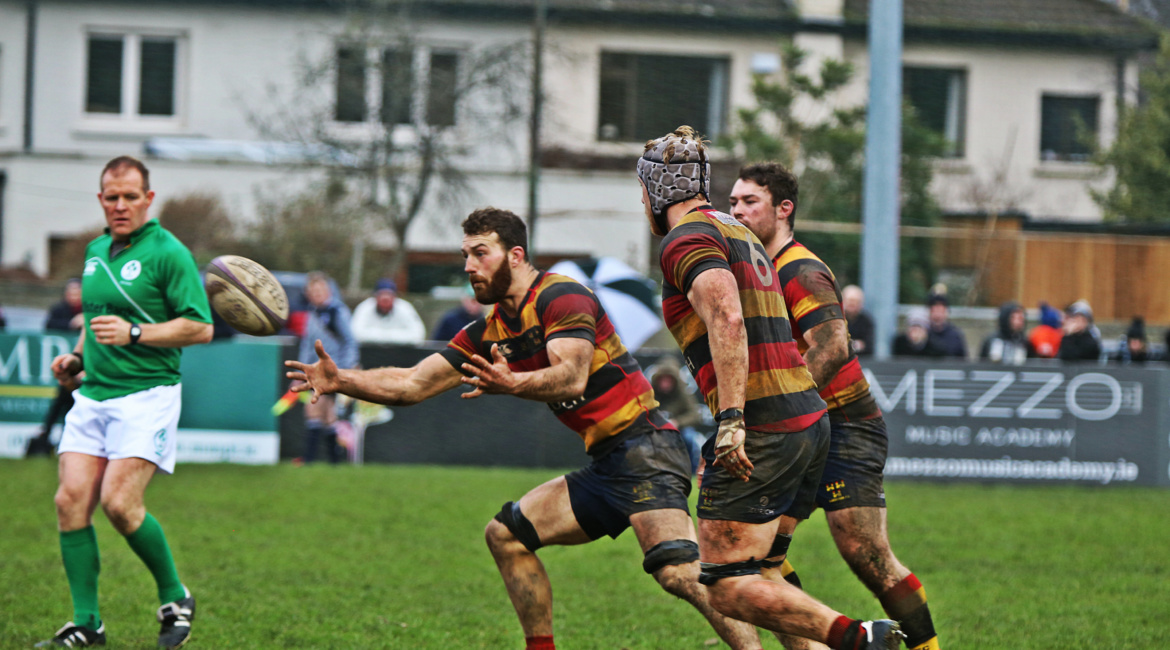 A wet, mucky day, with a chill wind blowing off the Dublin Mountains ensuring that this top-
of-the- table clash was always going to be a close-fought, tight affair.

And so it came to pass – two evenly-matched sets of forwards spending eighty minutes
battering the bejaysus out of each other with back play in limited supply, with the greasy ball
and wind frequently making possession a liability.

Both teams tried to play open rugby, but the elements were the winner in this regard. When
you throw in two committed defences, a cliff-hanger was almost inevitable.

With their unbeaten record on the line, Lansdowne, playing with the elements first, started
quite nervously and much early possession was turned over due to a combination of knock-
ons, line-out malfunctions and a spoiling Terenure defence. For their part, Terenure took on
the visiting forwards and forced a series of penalties – the first half count was 9-2 in their
favour – which helped frustrate the League-leaders.

Lansdowne’s inability to get on top up front and regular concession of penalties meant that
they were unable to generate any momentum with the wind at their backs, and their
frustration was apparent. Two early penalty line-out chances close to the Terenure line were
squandered. To make matters worse, the home side took advantage of two successive
penalties to set up a driving maul close to the visitor’s line.

Having consulted with his touch judge, the referee awarded ‘Nure a try half way out, hooker
and captain Robbie Smith judged to have scored from the maul in the 22 nd minute.

The conversion was missed in the difficult kicking conditions, but points against the wind
were invaluable. To their credit, Lansdowne never panicked, and slowly began to improve
their ball retention and control. In the 35 th minute, following a penalty lineout seven metres
from the home line, second rower Josh O’Rourke powered over the line for the equalising try.

Out half Scott Deasy converted, and the visitors had their noses in front – just. Terenure
winger Jake Swaine was yellow carded in the build up to the Lansdowne try, but the elements
were such a leveller that it was difficult to craft any particular advantage from the extra man.

Half time came, with Lansdowne requiring a lot of work against the stiff breeze and
intermittent showers. Their cause wasn’t helped when scrum half Alan Bennie joined Swaine
on the naughty chair for ten minutes and out half Mark O’Neill kicked the resultant penalty to
snatch an 8-7 lead for the home side.

Slowly, however, and driven by No. 8 Willie Earle, who had another great match, the
Lansdowne pack began to win the arm wrestle up front. Earle was ably assisted by tight head
and captain Ian Prendiville, O’Rourke, hooker Tyrone Moran and Charlie Butterworth on the
flank, in particular.

Scoring opportunities were still at a premium, however, as both sides defended stoutly when
the opposition had the ball. Lansdowne went up through the gears, and were helped by the
impact of their bench, Oisin Dowling and Ntinga Mpiko especially, in setting up attacking
chances as they pummelled the Terenure line. This was reflected in the penalty count, as it
began to shift in their direction – the second half count was 8-7 in Lansdowne’s favour.

The visitors encamped in the home ’22, and a series of close-in, pick and go drives and mauls
put huge pressure on the Terenure defence. Eventually, after several minutes of intense
pressure, hooker Tyrone Moran surged over the line on 70 minutes and the Headquarters
team had snatched the lead back, 12-8. Deasy was unlucky with his low-driven conversion
attempt, which came back off the upright.

Terenure are a never-say- die side, and they came back at the visitors in an effort to snatch a
result. This time it was Lansdowne’s chance to show their sterling defensive qualities as they
repelled everything the desperate home side could throw at them.

In the end, and based on their second half performance, Lansdowne deserved their narrow
victory. It wasn’t a great day for the backs to shine, but they stuck to their task manfully, no
one more so than winger Daniel McEvoy, who definitely had the better of his much-vaunted
opposite number, Sam Coughlan Murray. Others to show well were winger Adam Leavy,
centre Harry Brennan and sub winger Foster Horan, fresh back from Ireland 7’s duty.

Afterwards, Head Coach Mike Ruddock expressed his pleasure at his side’s performance, in
particular the battling second-half. He pointed out that Lansdowne, as the team to beat in the
League, had first to wear down fired-up opponents – hence the consistent second half
improvement in his side’s performances after the break.

Two thirds of the regular league programme over, twelve wins on the bounce and a sixteen-
point lead at the head of the table. Not a bad place to be in for the Headquarters side! No one
is taking anything for granted, however, in particular in light of last season’s events. But
considerable momentum has been generated, and confidence is high among Ruddock and his
young charges. Away to Garryowen next Saturday – they don’t get any easier – as
Lansdowne continue to plot their way towards their primary goal – a home semi-final.